Standardbreds are consistently showing their versatility, whether it’s riding or driving, for show or for pleasure. Hoof Beats is happy to share stories from readers about their favorite Standardbreds. This month, Charlotte Gelston writes about how she helped find a home for Notorius Bluestone with Terry and Charlie Dickinson.

We met Terry and Charlie Dickinson at our local grassroots political gathering two years ago. Since we wives shared a love of horses and our husbands a love of flying, we became good friends in a short time.

Terry, a former rider, accompanied me on a woods drive with “Rhythm,” and was immediately enthusiastic about harness driving.

By July 2016, Charlie, begrudgingly agreed to her adopting a Standardbred.  He insisted he was not going to build a barn, so I offered to let the horse they chose live here. After more than a year without a boarder, I was delighted with the prospect of having company on my drives.

My first thought as I began my search for the right match was,“Too bad that Notorius Bluestone has probably been adopted by now.  He would be perfect for Terry!”

Over a year earlier, I had found a potential match for him. However, when I told Linda Mowbray, the wife of owner Tom Lail, that he would be an “only horse,” she declined.

“I’m sorry, but ‘Blue’ would not be happy living alone,” she said.

With so much time having passed, I was fairly sure he would have been placed.

But I called Linda anyway, and was surprised and thrilled to discover Blue was still looking for the right home. When I mentioned that he would be living here, she said, “Your place is horse heaven; you can certainly have him!  When are you coming down?”

I called Terry with the good news. I asked her if they were available to drive down to New Jersey to meet him and bring him home next weekend. She was a little doubtful about moving so quickly.

“But this is the first horse you have found,” she said. “Why bring the trailer when I haven’t even met him yet?” she asked. “What if I don’t like him?” 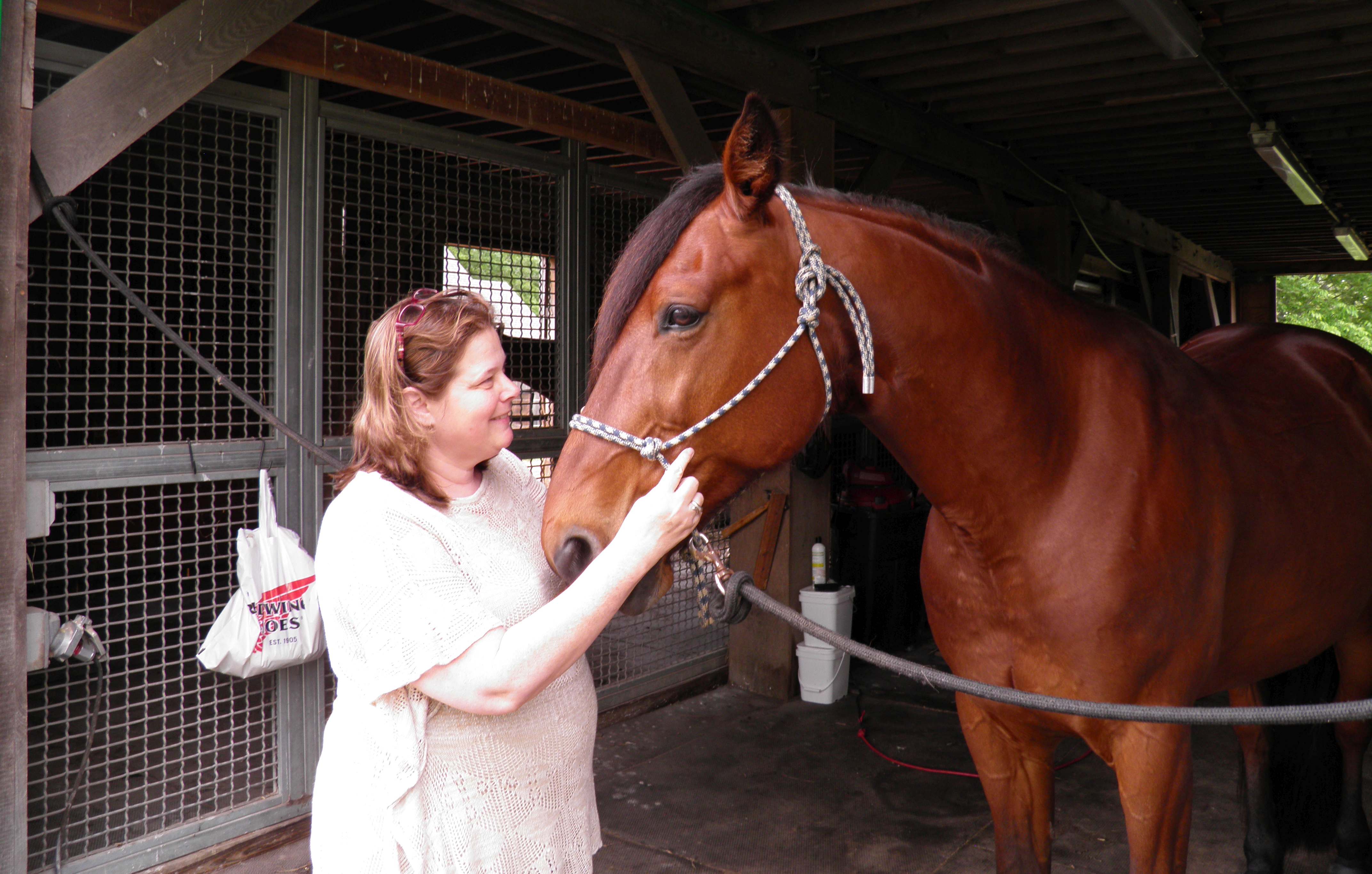 CURE FOR THE BLUES: Terry Dickinson, who lives with an autoimmune disease, has found Blue to be a healing presence in her life.

“If you don’t like him, we can always go back with an empty trailer,” I told her. “But after making this trip to New Jersey, I guarantee you will not want to make it a second time if you do want him.”

She agreed it was a valid point, so we made plans for the trip.

My husband, Todd, and I drove our truck and trailer. Terry and Charlie had to drive separately, as our truck has no second seat. Four and a half hours later, we were at Linda’s.

We walked into her barn and saw a magnificent bay gelding with a long, thick mane and tail.  As Terry approached him, I could tell by her expression it was love at first sight. “Blue” reciprocated by nuzzling her hair with his lips, a sure sign that he had chosen her as well.

“The minute I looked into his beautiful eyes, I was in love,” Terry said.

“I feel like Blue saved me,” said Terry. “I have lupus erythematosus (an auto-immune disease), but since he came into my life my health has stopped declining. A horse is the best therapy, and my ‘empty nest’ is no longer empty.”

Linda was curious about my bitless bridle, and had asked me to bring one along.

“Let’s see how he does with this,” she said as she harnessed him, attaching her driving reins to my bridle.  Terry got in with Linda, who drove out to the training track.

Blue responded beautifully to the bridle.

“He likes this much better than the bit,” she said. “He’s relaxed and not fussing at all.”

Terry took the reins and drove him successfully, although she was just a beginner.  All doubts she might have had vanished. 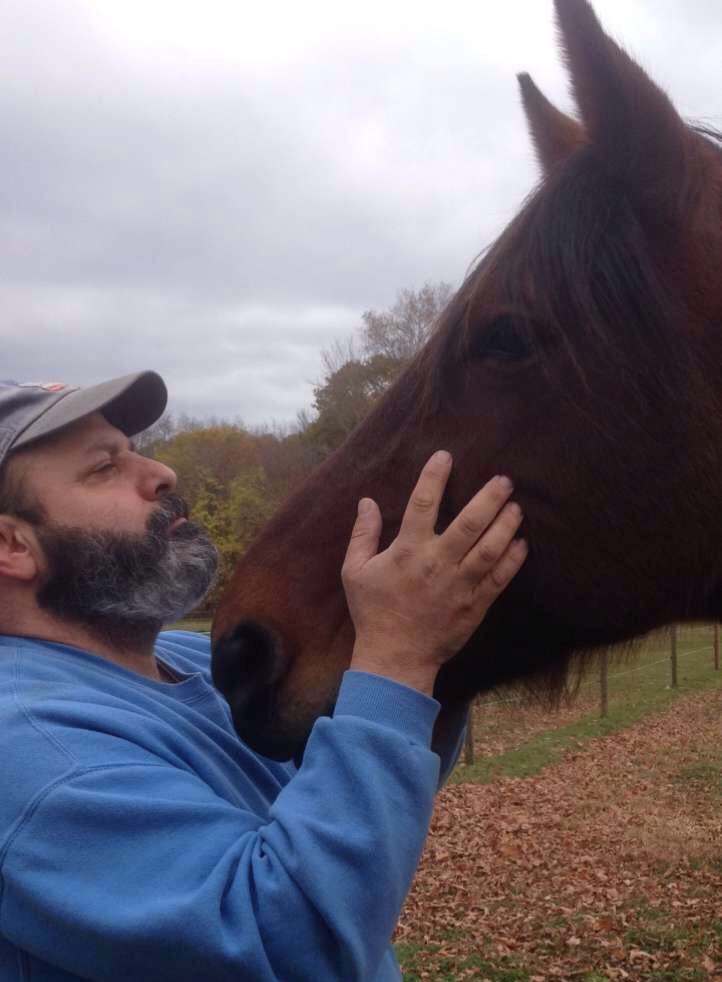 Charlie Dickinson may not have wanted a horse, but he has found a friend in Blue.

“Linda drove Blue first, and then gave the reins to Terry,” said Charlie. “At that precise moment I knew we were going home with a horse.

“My wife wanted a horse, but I did not. So we compromised and got a horse.”

“I feel like Blue saved me,” she said. I have lupus erythematosus (an autoimune disease), but since he came into my life, my health has stopped declining. A horse is the best therapy, and my ’empty nest’ is noot longer empty.”

On the way home, Blue made a positive impression on Charlie in an unexpected way.

“Todd and Charlotte were towing the trailer and Terry and I were in our truck a safe distance behind them,” he said. “A man in a convertible, top down, was tailgating us and driving like a fool in the heavy traffic. He swerved into the breakdown lane to pass us, pulling in close behind the trailer.

“Right then Blue chose to relieve himself.  Since the trailer gate is not watertight, he sent a spray of liquid all over the car, its driver and his passenger! Realizing what had happened, he was flailing his arms in disgust, but he had nowhere to escape in the tight traffic.

“Terry and I were howling with laughter. We called Charlotte to tell her, but we were laughing so hard she couldn’t understand a word we said until we regained our composure. That episode sealed the deal with me. I knew Blue and I would be the best of friends. Well done, sir.”

From Racing Oval to Full Circle 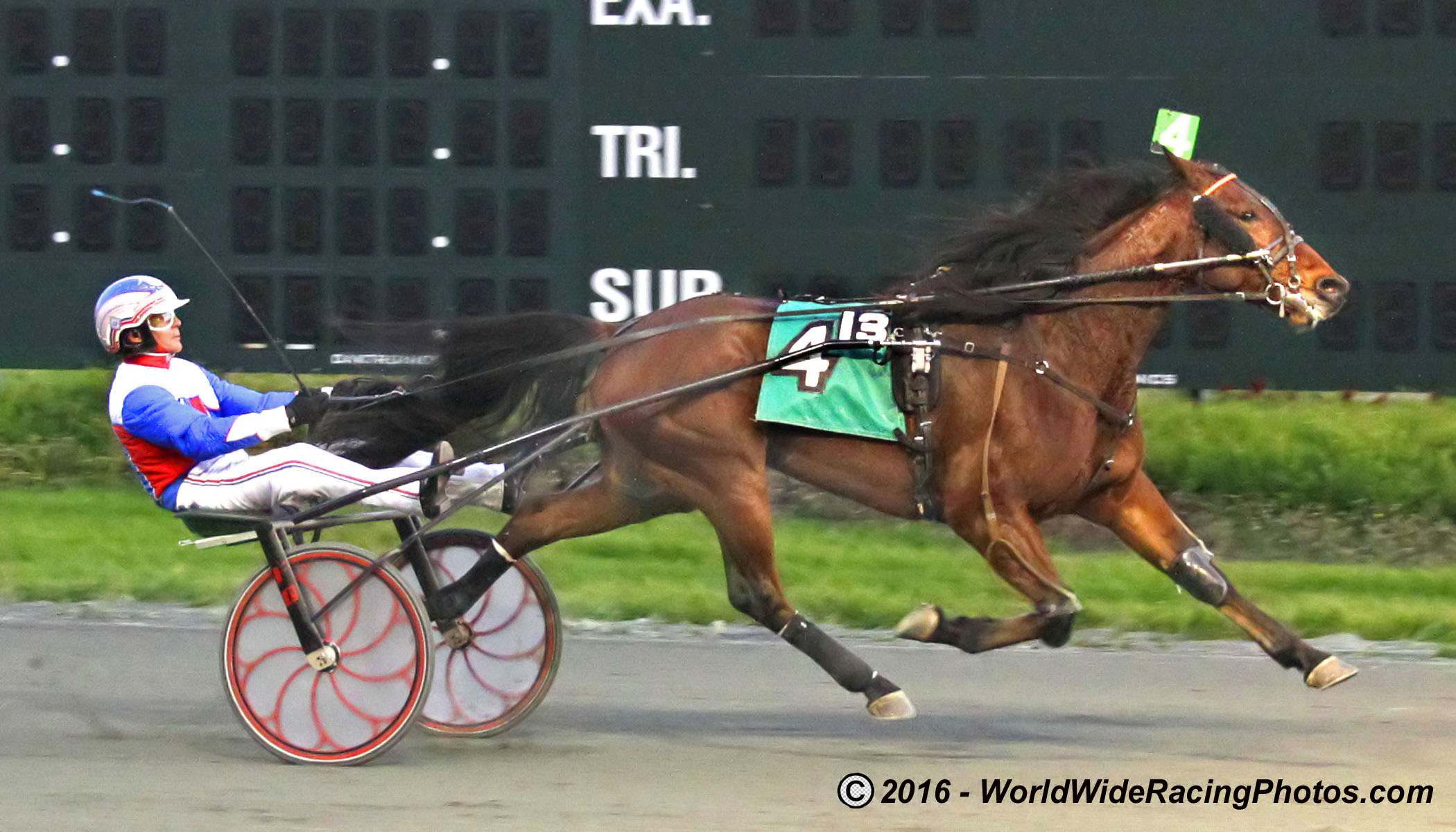 Known as Notorius Bluestone on the racetrack, Terry and Charlie Dickinson’s beloved pet earned over $80,000 in his racing career.

The horse was placed with Terry and Charlie Dickinson, by Linda Mowbry, Lail’s wife. Prior to placement, the horse was enrolled in the USTA’s Full Circle program, which means Lail and Mowbry notified the USTA that if this horse can no longer be cared for by its owner or is in imminent need of assistance, that they would like to be contacted.

If you have such a horse in your custody or know of its need for assistance, call the USTA at 877-800-8782, ext. 1, or email fullcircle@ustrotting.com to get contact information for the person who enrolled the horse.

For more from the December 2017 issue of Hoof Beats, click here.

Previous: Mutuel Feeling: Pop Quiz
Next: First Turn: A letter from the editor