Standardbreds are consistently showing their versatility, whether it’s for riding or driving, for show or pleasure. Hoof Beats is happy to share stories from readers about their favorite retired Standardbreds. This month, Megan Maccario writes about former racing trotter Jesse’s Justin, who now goes by the name Justin Time.

The tradition of finding and retraining Standardbred racehorses into champion roadsters has been in Larry Jenkins’ family for more than 70 years. Jenkins has trained and shown many roadster horses throughout his life to carry on his family’s work. He has also played a prominent role in the roadster industry, as he is a past president of the American Road Horse and Pony Association and knows all the ins and outs of the sport.

Roadsters are Jenkins’ passion, and in 2017 that passion was raised to a fever pitch when he discovered a very special Standardbred.

Jenkins, who resides in Suwanee, Ga., attended an Amish sale in Mt. Hope, Ohio, in early June 2017, and came upon a trotter by the name of Jesse’s Justin. The stallion has since been renamed Justin Time, and Jenkins said he has never been so fond of a horse in his life. He revealed why he believes this horse, affectionately known as “Justin,” is the perfect roadster.

“The previous owner, who I am in touch with regularly, told me Justin had too much motion in his front and broke too high, which is good news for us Roadster fellows, but not for racing,” Jenkins said. “He just didn’t quite have the speed to be successful on the racetrack. Justin also had a short racing career and hadn’t fully experienced the ‘rough and tumble’ of racing, which was more good news for me.”

Jesse’s Justin, a 5-year-old son of Jailhouse Jesse – Davner, was bred by Oakwood Farms in Montgomery, Ind., and was purchased privately as a yearling by Duane and Carrie Hollman. Conditioned by Carrie, Jesse’s Justin made three starts on the Indiana fair circuit as a 2-year-old and recorded fifth, sixth and fourth-place finishes. He banked $390 during his brief career.

After purchasing Justin Time, Jenkins retrained the stallion and much to his surprise, he was ready for his first small show as early as that November.

“He fell in line pretty quick,” Jenkins said. “Some horses take more time than that, but not Justin. He made the best first-show horse I have ever shown.”

Since breaking his maiden in the show ring, Justin Time has collected five blue ribbons. He has won the following events:

Jenkins was eager to provide guidelines on what to look for when purchasing a prospective roadster and the challenges faced during retraining.

“When seeking a prospective road horse, you want a horse that trots close behind,” he said. “If a horse is wide-gaited, they will have a hard time getting around turns, as the ring is a much smaller oval than what Standardbreds [that raced] are used to. You want them close to the rail, but they aren’t used to the rail either because Standardbred racing doesn’t have rails; they have pylons. Those are the biggest obstacles to overcome in converting [a horse] to a roadster.”

Roadsters are shown at a jog trot, road gait and at speed, and they are hitched to a two-wheeled cart (bike) or a four-wheeled wagon or shown under saddle. Jenkins said the judges want horses to trot at speed, but maintaining form is essential, as it is a performance, not a race.

On any occasion Justin Time claims a victory, Jenkins is jubilant, but that joy is not simply because his horse was the best in the ring.

“Every time Justin wins a blue ribbon, I donate $100 to New Vocations [Racehorse Adoption Program],” Jenkins said. “I absolutely love their mission and work they do with the horses they take in.”

Jenkins believes in transparency and when he acquires a horse, he contacts the previous owner regularly to provide updates.

“One of the best parts about buying one of these horses is the training and transition period,” he said. “When you take them into a ring for the first time, most of them will be hesitant. You must be patient with them and before you know it, you start seeing progress. Standardbreds are such a versatile breed that you can ask pretty much any trotter or pacer to do anything you ask. Ninety-five percent of roadster horses are Standardbreds, and there is a definite reason for that.”

Jenkins continues to have high hopes for Justin Time and is excited to see what further heights the stallion will ascend to in his second career.

Megan Maccario is a freelance writer living in New York. To comment on this story, email us at readerforum@ustrotting.com.

187 More posts in Hoof Beats Magazine category
Recommended for you 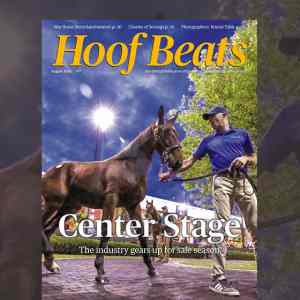