What does it take to get 1,857 votes to win the Hoof Beats Photo Contest?

Apparently it takes a dynamic shot of a horse with a worldwide following that shares a name with a famous athlete.

The winning photo—seen on this month’s cover–is a shot of a trotter named Captain Primeau, taken by Helene Gregory, who is the track photographer at Freehold Raceway. “The Captain” is 13 years old and has an incredible 271 lifetime starts, racing mostly at Freehold and the Meadowlands.

Captain Primeau, named after hockey player Keith Primeau, is co-owned and co-bred by Conny and Anneli Svensson. Conny has been the longtime farrier for the Jimmy Takter Stable and is (coincidentally, I swear) profiled in this month’s issue of Youth Beats. Anneli, on the other hand, is the de facto press agent for Captain Primeau, as she mounted a summer-long campaign to make this photo the winner of the Hoof Beats Photo Contest. 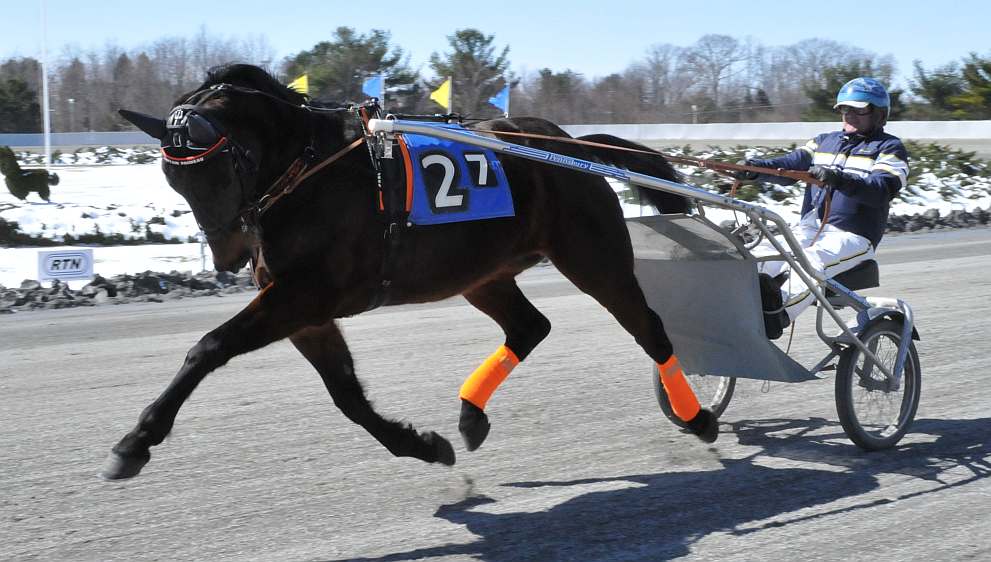 The winning photos in the 2017 Hoof Beats Photo Contest was of trotter Captain Primeau, taken by Helene Gregory at Freehold Raceway.

Sure, she shared it on Facebook several times, like most entrants did. But so did the twin daughters of the driver in the photo, Bruce Lauer, as well as Anneli’s daugther, Sarah. Anneli also emailed everyone in her contact list, encouraging them to vote for this photo. The Svenssons are originally from Sweden, so when we analyzed the voting results, we saw hundreds of Swedish email addresses voting for this photo.

Then Anneli started contacting fans of the Philadelphia Flyers, the National Hockey League team on which the human Primeau played from 1999-2006, asking them to vote for the photo. Then she got Steve Trevelise, her neighbor and evening host on the NJ 101.5 radio station, to share the contest with his 5,000 fans on Facebook. How much do you want to bet that most of those people were not thinking about harness racing until they heard about this contest?

The result? Nearly 2,000 votes and the cover of this month’s magazine.

Incidentally, Captain Primeau was mentioned in last year’s December issue, too, but in the Greener Pastures section. Anneli submitted a personal story about the death of beloved mare Lizzie Lee Brook, the dam of Captain Primeau. She wrote that the foal was supposed to be named Primeau, but when Sarah, noticed that he had a star that looked like the letter C, they named him Captain Primeau instead, in honor of the C that captains of hockey teams wear on their sweaters. Sidenote: Captain Primeau has an older brother named Brind’Amour, after Rod Brind’Amour, who played for the Flyers from 1991-2000.

To reiterate something I have written in years past: the Hoof Beats Photo Contest is a popularity contest, simple as that. This contest is a chance for anyone on social media to enter a photo, then share the heck out of it to get enough votes to win.

Anneli Svensson went above and beyond to make this happen, and we are excited to honor her and her horse—along with Helene, the photographer—for their efforts.

Hope you enjoy this photo – and all the others we received – which you can see here.

To see more from the December 2017 issue of Hoof Beats, click here.

Previous: Life After Racing: A Bay Named Blue
Next: Capture The Feeling