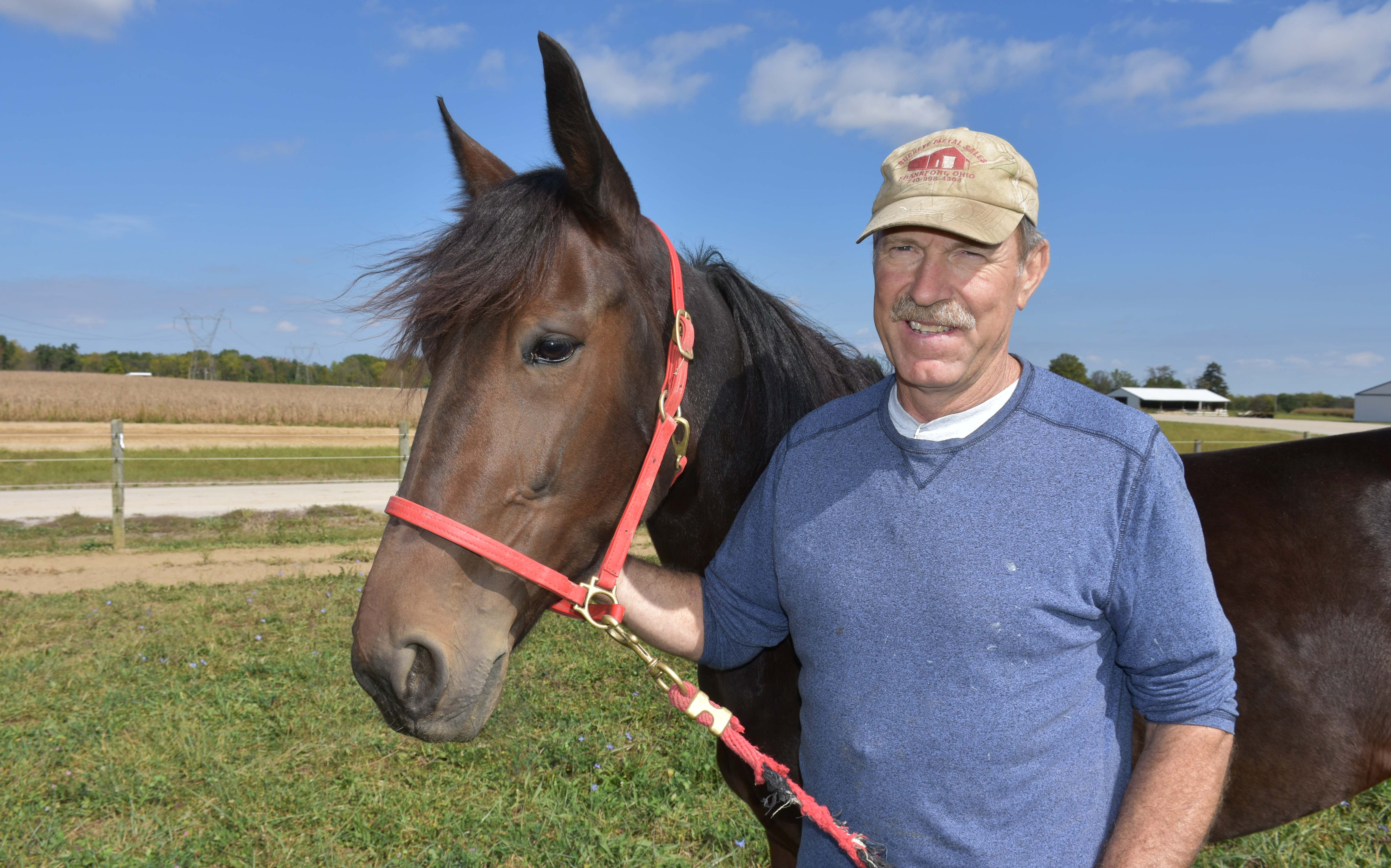 Trainer Dan Ater pictured with trotter Sandys Victory, a favorite of his that he paid only $8,200 for but has gone on to earn nearly $130,000 for him this year. Steve Montemarano photo.

In the office at Midland Acres in Bloomingburg, Ohio, Dan Ater sprawled in a chair, his lanky frame and body language more reminiscent of the Marlboro Man than an Ohio Hall of Fame trainer.

“Honey B is a nice filly; I’m lucky,” he drawled, speaking simply about his 5-year-old trotting mare that is closing in on $100,000 in earnings this season. She is just one of the 35 head that have given Ater a career year in both wins and earnings, including his first $1 million season.

“Some people have better numbers. I just try to help others,” he said.

Joined by a cast of family members and friends, Ater trains his stable on his 51-acre family farm in Clarksburg. Ater’s sister, Ruth Ann, left a career in education to help out. 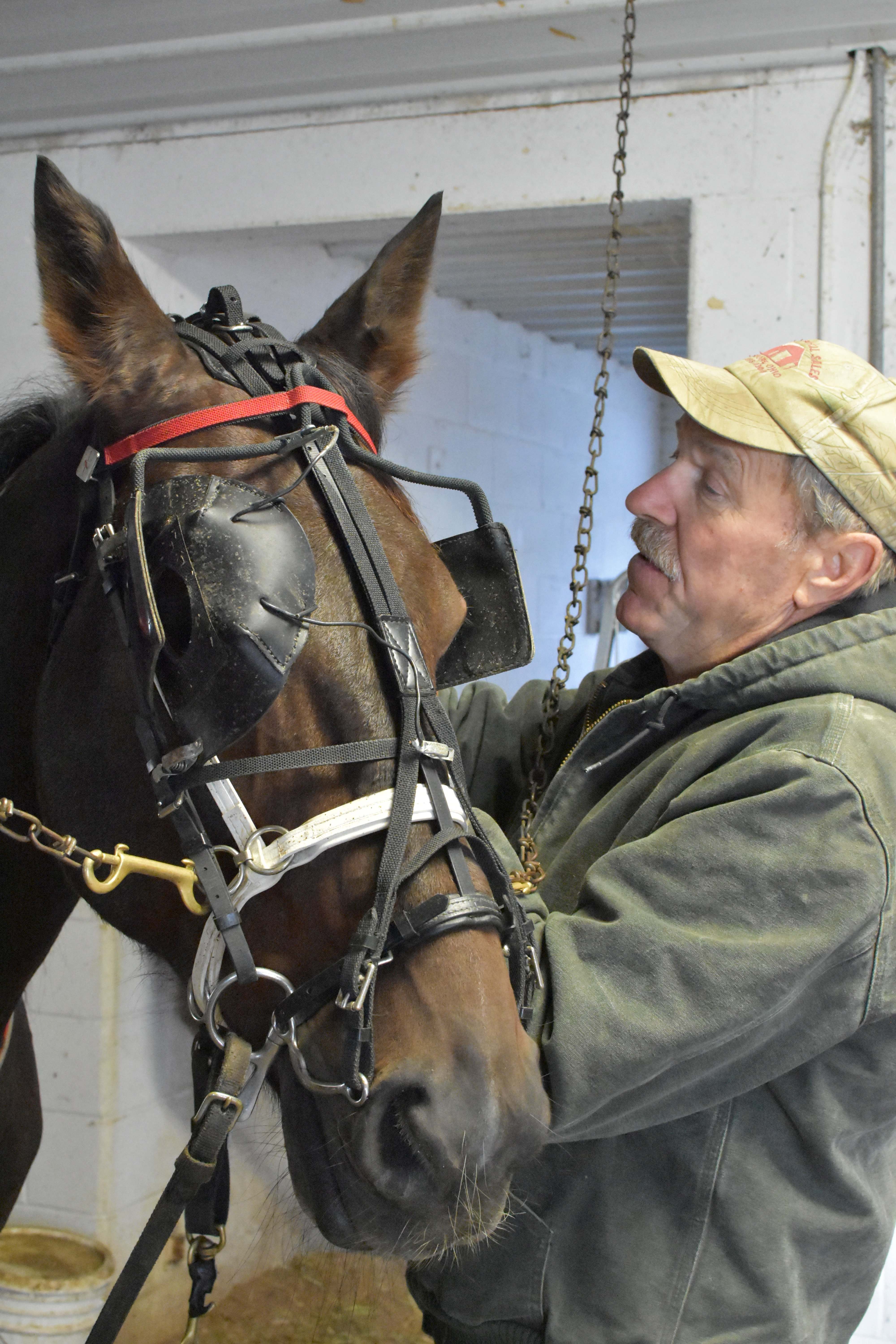 With the assistance of family and friends, Ater trains his stable on the 51-acre family farm in Clarksburg, Ohio. Steve Montemarano photo

Training a large stable isn’t easy. In the barn there are horses standing in cross-ties, one swimming in an indoor pool, and another with a contraption strapped to its knees getting cold-water therapy.

The horses always have hay in front of them. Ater hugged a dark brown gelding and wondered if he was too fat. He then jumped into an old water truck and sprayed moisture onto the training track. Then he was climbing into another vehicle and harrowing the five-eighths-mile surface. There’s no task that’s beneath him, both in the barn and in the boardroom. He’s also a longtime USTA director, representing the horsemen of District 1.

A Chevy diesel rumbles to life as Ater’s son, Kyle, loads three horses onto a gooseneck trailer destined for the races that night.

The work is physical, intense, and calmly coordinated.

Yet there’s a sensitive side to the rugged Ater. He’s been fighting cancer for years. He was first diagnosed with prostate cancer. Then in 2001, tests revealed pancreatic cancer. The doctors gave him five years to live. In 2014, the majority of his liver was removed in a 14-hour surgery. The next year, the cancer spread into his bones.

But you’d never know it. He’s positive and fit with healthy color in his face.

“The chemotherapy pills cause sores in my mouth that make it hard to eat,” he said.

“Cancer is like any health issue. You have to do all the right things to live with it. I owe a lot to Bhavana Konda, M.D. She restored my fighting attitude and reminded me not to believe in having only a short time to live with a cancer diagnosis.”

There are weekly calls and visits from people wanting to discuss their cancer and understand how Ater battles his.

“Dan is the toughest son-of-a-gun I know,” said Jay Mossbarger of Midland Acres.

Ater said he eats a mostly organic diet and dropped 20 pounds. Every day starts with a healthy breakfast and then his mother fixes lunch. 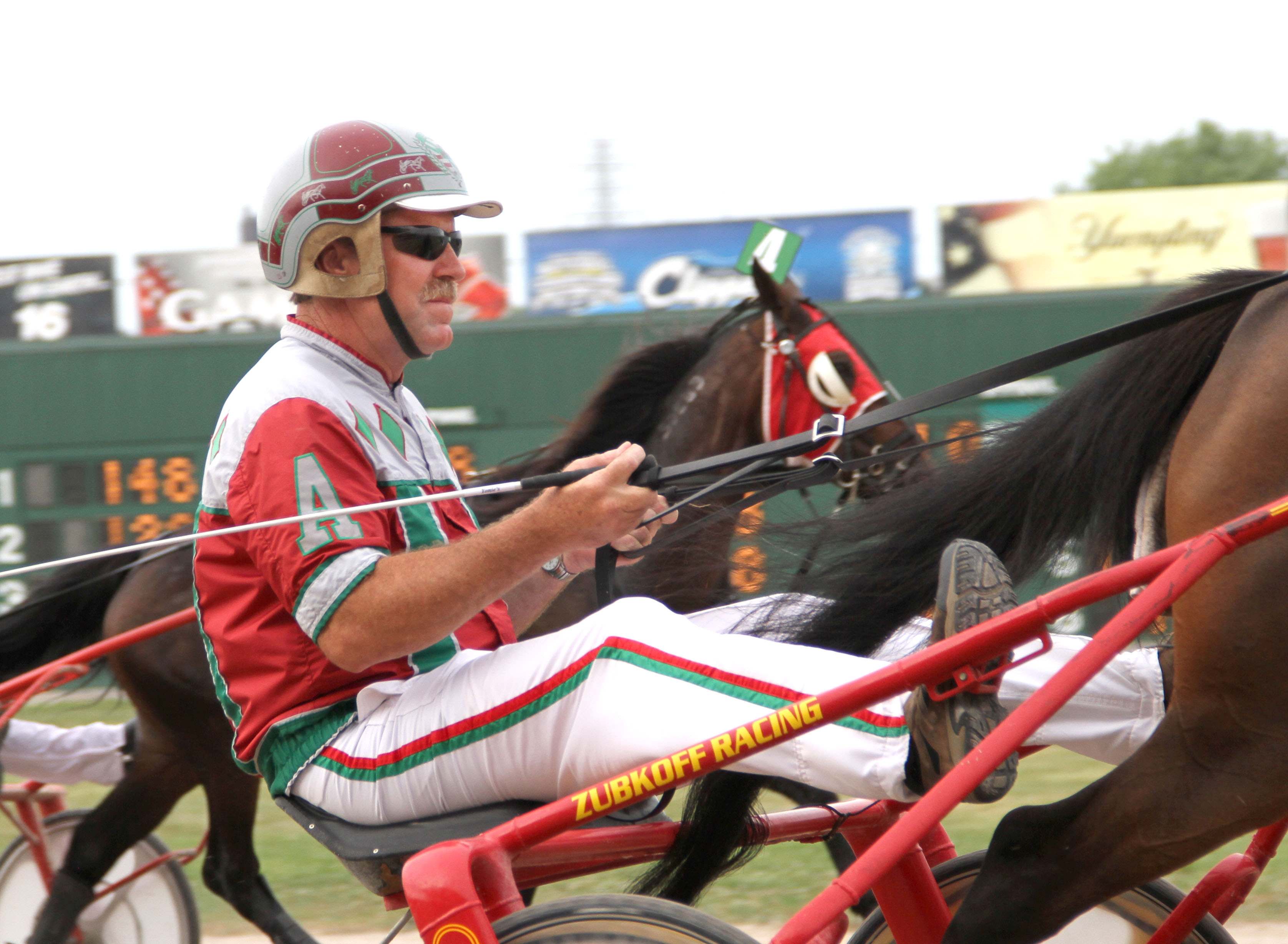 At this year’s Ohio Selected Jug Sale in Johnstown, a relaxed Ater sat in a folding chair at the Midland Acres consignment. A crockpot of fried chicken wings wafted an irresistable aroma that couldn’t be resisted. He polished off a pile of wings, content amongst whinnying horses and friends.

“Doctor Bob Schwartz is my best friend–none better,” said Ater about the man that attends to the veterinary needs of his stable while also having worked at Midland Acres since 1971.

Schwartz and Ater have had close calls. At last year’s Ohio Selected Jug Sale, a yearling got a hind leg stuck in between steel bars dividing the stalls, suspending the colt’s rear end. They rushed in to help–risking life and limb. Ater pried the bars apart in a super-human effort and the horse was saved.

In a quieter moment, Ater contemplated life from a brown leather couch in his office. He said his four children are everything to him: Kyle, Nick, MacKenzie and Daniel.

Daniel is 14 years old and understands his dad’s illness. Seated next to his father, the teen politely asked if he could unload sweet feed from a truck. After some instruction, he got up off the couch and left. As the office door shut, the elder Ater’s voice unexpectedly wavered – and he wept.

“The older kids can take care of themselves, but I’m worried about Daniel,” he said.

Ater then gathered himself and spoke about the Ohio racehorse business.

“If it wasn’t for Gov. John Kasich and [Ohio State Racing Commission] Chairman Bob Schmitz, I wouldn’t be training horses today,” Ater said, referring to the infusion of purse money from video lottery terminal legislation that revitalized racing in the Buckeye State.

Another turning point was training better horses. His keen eye identified Sandys Victory at an auction in 2016. For $8,200, Ater thought he purchased a useful claimer. But the mare trotted in open company, earned nearly $130,000 this year, and achieved a mark of 1:53.4.

At sunset, Ater left the office to feed and water the horses. He checked each one for subtle signs of well-being. When he got to the last stall, the mare was lying down and hadn’t eaten.

It was Sandys Victory.

Ater became visibly worried. The mare’s flanks were bloated and she hiked a hind leg–a tell-tale symptom of belly pain. Ater took the mare’s temperature and called Schwartz to investigate. Shortly after receiving treatment, the mare perked up, nibbled hay, and drank. But she wasn’t out of the woods yet.

Ater had his trailer hitched and ready to transport the mare to the Ohio State University Veterinary Hospital an hour north in Columbus. But when he checked back on her, the colic episode had resolved.

“I’d never been so happy to see a pile of fresh manure in my life,” he said.

The next morning, “Sandy” was turned out in a grass pasture to relax. But the mare just stood by the gate.

“It’s the darndest thing–you put them out, they want to come in,” said Ater.

He returned to the barn to get a pasture mate for his prized trotter.

“They’re herd animals and want a buddy,” he said.

Despite racing for better money than ever, Ater said he laments that racing has changed over the years. In the past, it was more about enjoyment than making money, he opined.

As for racehorse ownership, he recommends budgeting only what you can afford to lose.

“I’ve always had good owners,” he said. “You’re only as good as the people around you.”

And why are Standardbreds going faster? Ater believes that’s due to the breed having improved. “Horses today just look faster.”

With Ohio racing experiencing a renaissance, the Jug Sale boasted high prices, with one horse fetching $150,000. Many Ohio-based trainers couldn’t afford a purchase. Ater managed to acquire a colt by McArdle for $27,000, named Luck Is My Charm. That name mirrors Ater’s life.

Previous: Manchego Looks To Make History In Breeders Crown
Next: Game Changer: Off and Pacing App