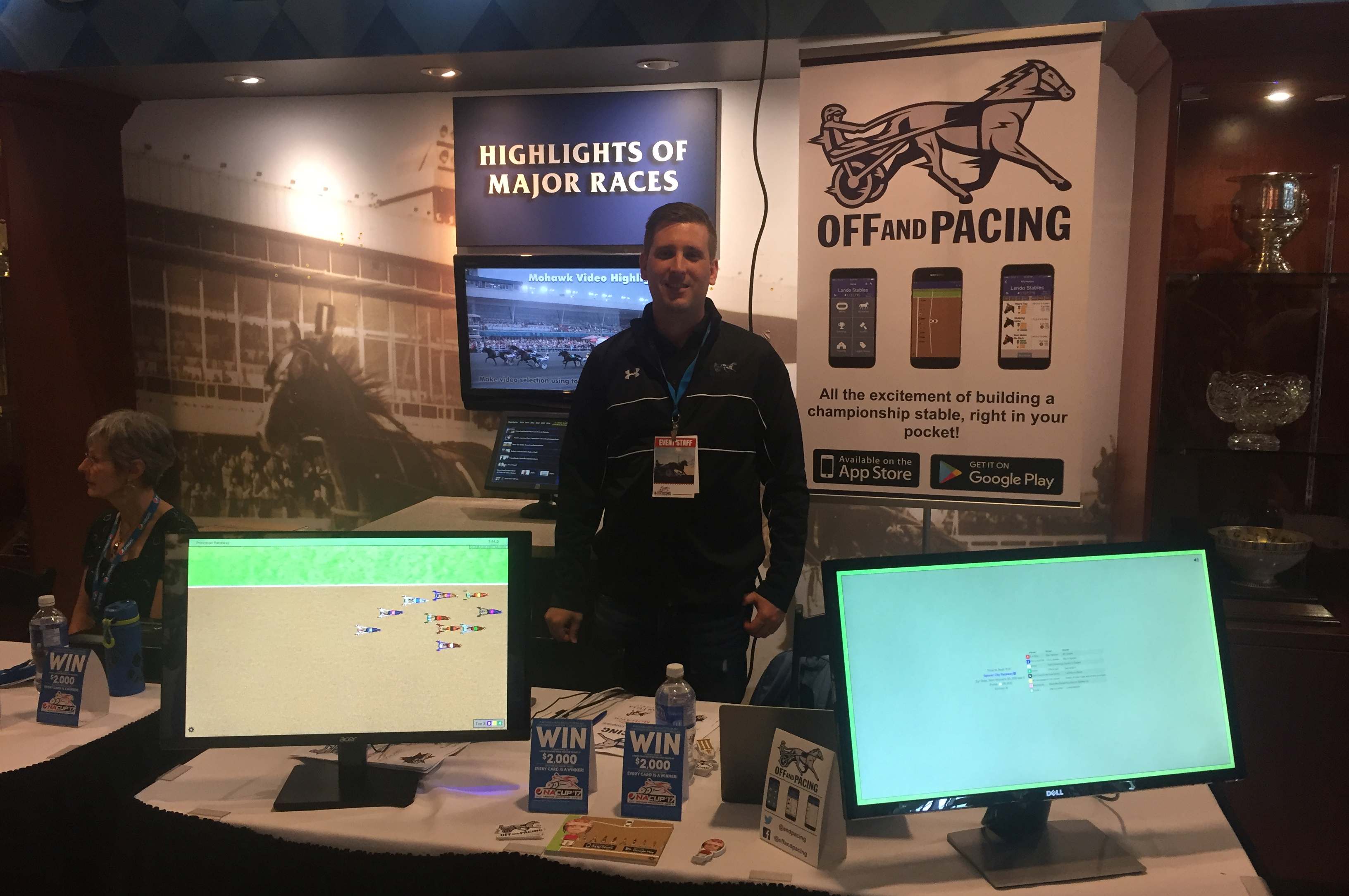 FAN-TASTIC: Ontario-based video game developer Ryan Clements launched his Off and Pacing app this past spring and has watched its popularity grow by leaps and bounds since then. Photo courtesy of Ryan Clements

At the height of summer Grand Circuit and fair racing, the subject of racetrack attendance and handle seems less concerning than at other times of year.

But Ryan Clements isn’t content with the status quo, not even as grandstands fill during the summer.

The Uxbridge, Ont., video game developer is rapidly gaining industry prominence for his sport-specific game, Off and Pacing.

Clements, who is based out of his office at Prince Lee Acres, an active Standardbred racing and breeding operation, said that it’s his objective to use the mobile phone game to help bring harness racing closer to the heights witnessed during the career of the “Pacing Machine,” Cam Fella, who was co-owned by Ryan’s grandfather, Norm. 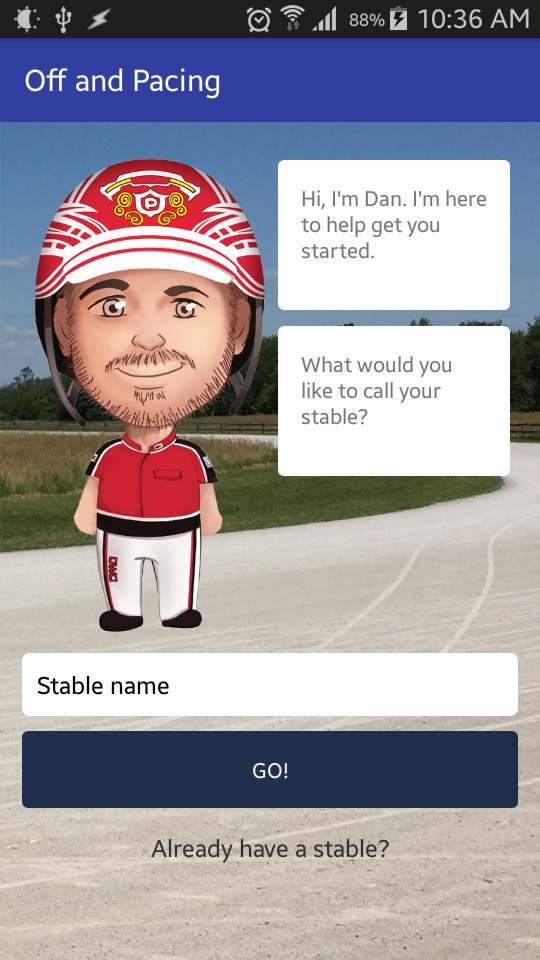 A user-friendly interface makes navigating the app easy and fun.

Introduced in the Google Android and Apple app stores on April 27 and May 3, respectively, Off and Pacing debuted at the beta test level last winter. It attracted test players from social media to advise on ways to optimize the gaming experience, which incorporated building and managing a racing stable. A breeding stable component has since been added.

Off and Pacing is an informal educational tool, allowing gamers to learn about the varied aspects of running a real racing stable. The game is free to download in both app stores, and “coins” can be purchased to buy horses, pay staking and stud fees, and make other financial transactions within the virtual harness racing community. Coin sales are the developer’s sole source of game revenue, but coins don’t equal automatic success in Off and Pacing, noted Clements.

“Out of our top 10 [players], it seems that about half of them are people that purchased coins, and the other half are just good players,” he said.

As in actual harness racing, skillful stable management can put Off and Pacing players in position to win.

“If a multi-millionaire were to show up, they can buy a great stable of horses,” he said. “Now, it doesn’t mean they’re going to be the best—it means they have an advantage, having the money, but it doesn’t necessarily mean that they get the champion horse. Some guy that’s a farmer and raises a few of his own might happen to be the guy that gets the next champion.” 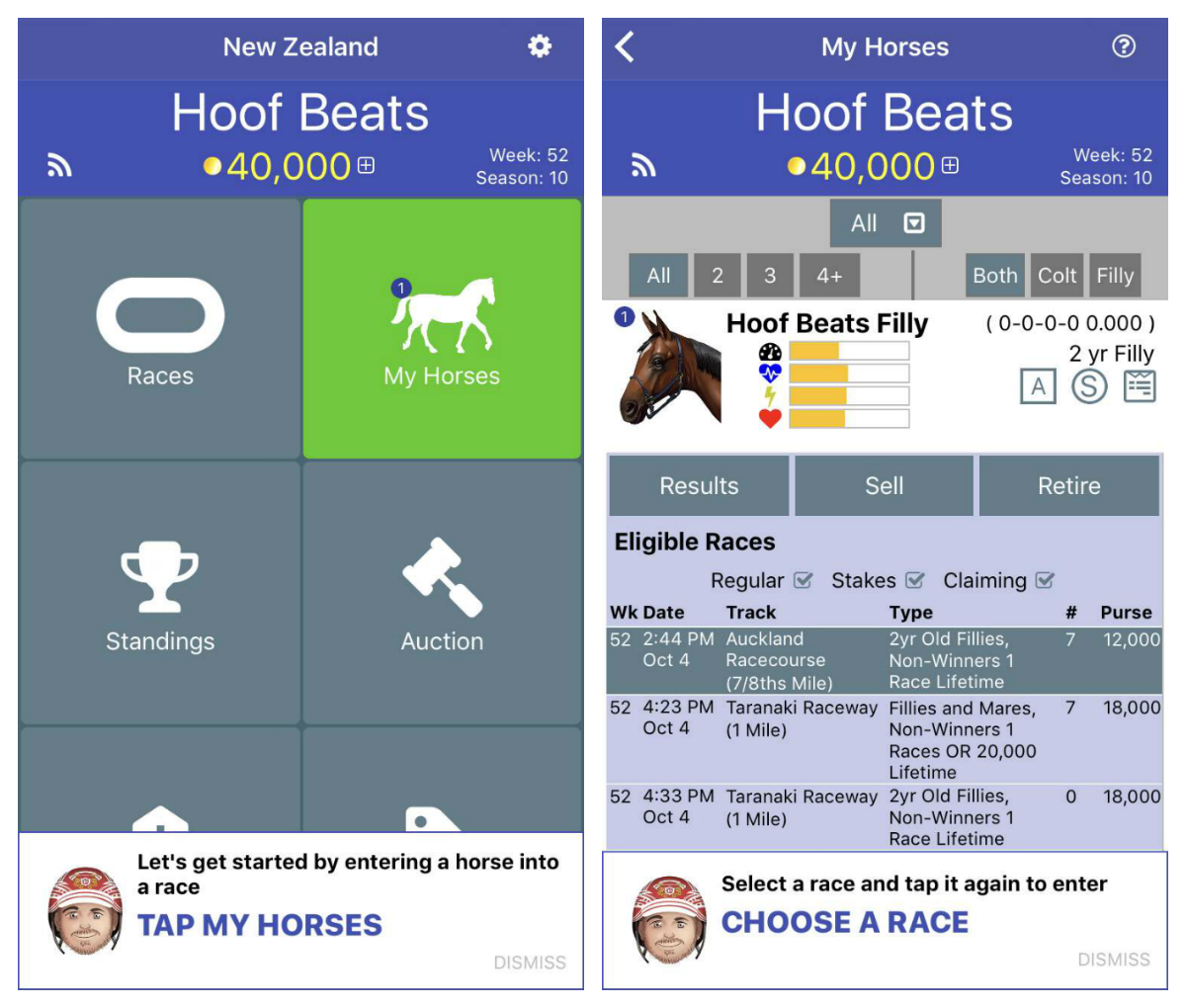 GAME ON: These sample pages from the Off and Pacing app demonstrate the layers of information available to any player. Above left: A menu page lets the player choose which aspect of racing he or she wants to act on. Above right: This page displays the typical information a player would see after entering a fantasy horse – in this case Hoof Beats Filly – in a race.

Two months following its launch on Apple and Android platforms, Off and Pacing has outperformed even the most optimistic projections by The Farm Ventures, his game’s parent company.

“Every step of the way, it’s been growing faster than we ever expected,” Clements said. “That was kind of nerve-wracking at times, because during the beta-testing, at that stage when we went from about 200 people to 1,000, it basically took the servers right down! So I was working all night in Hong Kong, trying to figure it out.

“We’re sort of in a similar situation now, where we haven’t been doing a lot of marketing or pushing the game that hard, because we’re kind of growing faster – not than we wanted to, but than we expected. We’re just trying to keep up.” 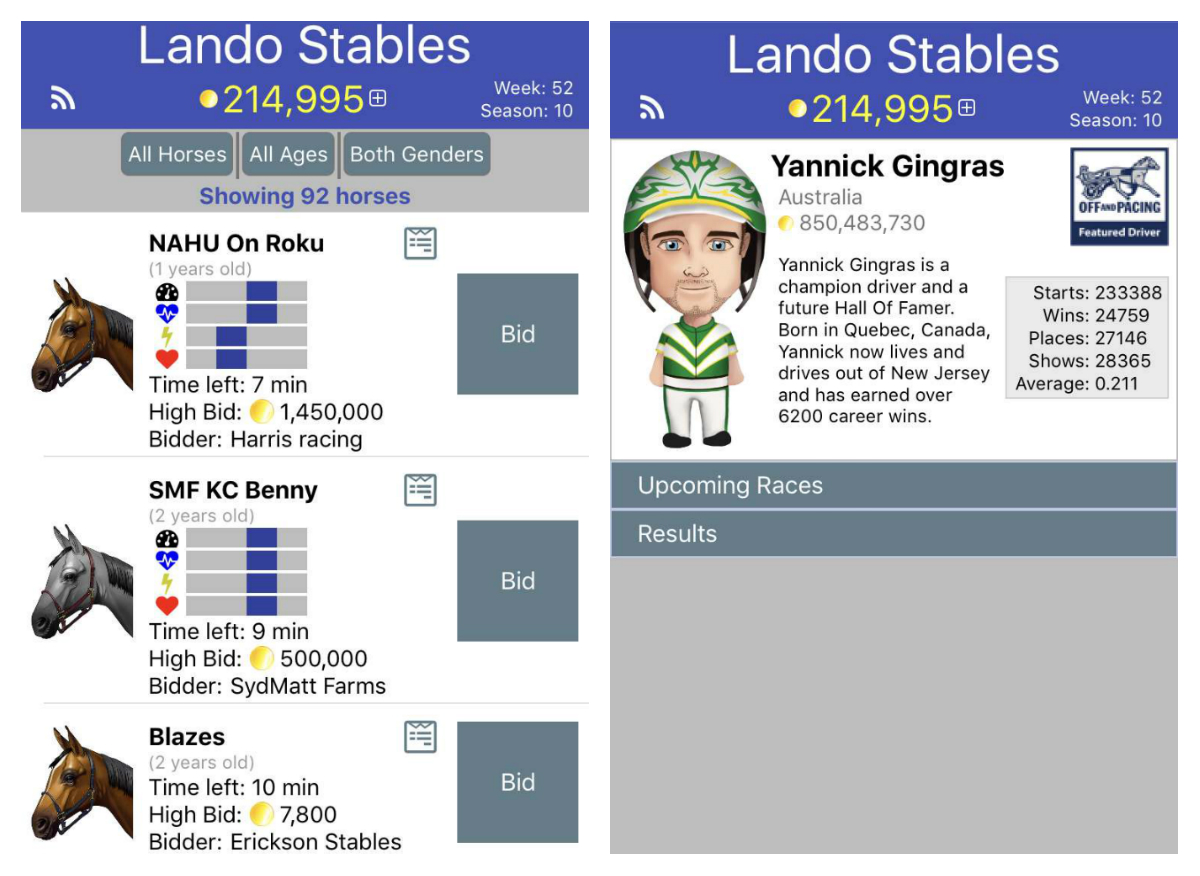 Above left: This page, created for a player going by the name of Lando Stables, shows a list of horses up for bidding in a fantasy auction. Above right: Several successful real-life drivers, including Yannick Gingras, have permitted the creators of Off and Pacing to use their likeness for catch-drivers in the game, allowing inexperienced players to connect to some of the top trainers and drivers at real tracks.

The game hit No. 4 on the Canadian racing game downloads chart shortly after its commercial debut. This category includes games based on all kinds of racing, making Off and Pacing’s rapid rise to prominence an unexpected thrill for the team behind it.

“I think No. 3 was EA Sports’ Need for Speed, so a game that they probably spent millions of dollars on, and we’re there with harness racing right beside them. It’s pretty cool,” said Clements. “It kind of scared me, because if we had like a million people sign up, it would’ve been tough to keep up. So we’re growing it faster than ever expected and we have high hopes for where we can get it to.”

Clements would like to see partnerships between Off and Pacing and real-life racetracks to continue raising the profile of racing.

“We’re looking at doing cross-promotion with the tracks, where if the player goes to the track and scans a code there—there’s a code on the [phone or tablet] screen—they can get some coins in the game,” he said. “So, for example, somebody lives in Toronto, and if they go out to Mohawk, they get 50,000 coins or something, for us to draw people directly to the tracks.”

There is a further industry-promotional element of the game: Clements said it is already helping connect inexperienced players to some of the top trainers and drivers at real tracks. Numerous successful horsemen, such as Yannick Gingras, Aaron Merriman, and Corey Callahan, have permitted their likenesses to be available for catch-drives in the game.

Off and Pacing has become an online meeting place for people with wildly different levels of experience in harness racing, and the connections made create a feeling of personal involvement, one which may expand to include fractional horse ownership, racetrack attendance, or pursuit of a career as a driver, trainer, or caretaker. It’s not a direct or guaranteed escalation from game-player to bona fide racing participant, yet Clements noted that players’ dedication makes that leap more likely.

“I can’t remember which driver was telling me this, but he was telling me he was warming up a horse [at a real track] and one of the people in the stands yelled out, ‘Hey, how come you booked off my horse at [fictional Off and Pacing track] Prince Lee Raceway?’” said Clements. “So there’s already these conversations going on between bystanders and trainers and drivers. I know that people are taking it seriously, so when they own horses in this game, they are naturally making that consideration of ‘Can I do this in real life?’”

Rather than drawing attention or dollars away from real racing, Off and Pacing acts more as a notification system in players’ pockets, reminding them of the sport every time they check on their virtual stables.

“If we can connect with them at that point, we can keep them in touch with harness racing, so they just don’t go [to major live races] one night and then forget about it,” said Clements. “They’re playing the game on a daily basis and it keeps harness racing fresh in their mind. Then they’re more likely to want to go back to the track the next Friday or Saturday night.”

Previous: Picture of Courage
Next: Life After Racing: Who’s the Boss?