Welcome back On Track! In this month’s newsletter, all about the February 2018 issue of Hoof Beats, we remember a legend lost, meet a rising stallion star, say goodbye to a longtime trotting stallion, and meet a training team in western New York. Enjoy! 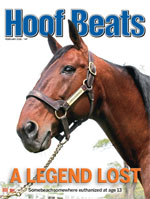 The racing world was stunned to hear that Somebeachsomewhere was euthaninzed Jan. 14 after a short battle with cancer.

Considered one of the greatest racehorses of all time, Somebeachsomewhere was making a name for himself in the breeding shed as well, leading all pacing sires in earnings the past two seasons.

Dave Briggs wrote an excellent obituary for the horse, which we combined with some photos by Mark Hall and Clive Cohen for this month’s cover story. Just one story won’t do him justice, however, so when we publish our annual Greener Pastures section in the December 2018 issue, we will take an even more in-depth look at Somebeachsomewhere and his impact on the Standardbred breed and the people associated with him.

From only two crops of racing age, Archangel led all sires last year in average earnings.

He only had two crops of racing age because he took a short hiatus from breeding to go back to the races. Now he is back in the breeding shed—this time at Winbak Farm of Ontario. Charlene Sharpe caught up with his connections and we share what she found here.

Back to the Backyard

While Archangel is just starting his stallion career, Sierra Kosmos has wrapped his up.

Now 29, the son of Nearly Perfect will retire to the backyard of his doting connections, Rick and Regina Beinhauer. Melissa Keith takes a look at his impressive racing career and two-decade stallion career here.

According to trainer Jack Rice, he has never had a fight with his wife, fellow trainer Maria Rice.

At least that is what he told Nicholas Oakes, who profiled the couple here.

Previous: The Buckeye Down Under
Next: Post Time Special: New Vocations Graduate J J Hall
4 More posts in Hoof Beats Newsletter category
Recommended for you
Hoof Beats – On Track – May 2018

Welcome back On Track! In this month’s edition, all about the May 2018 issue of...