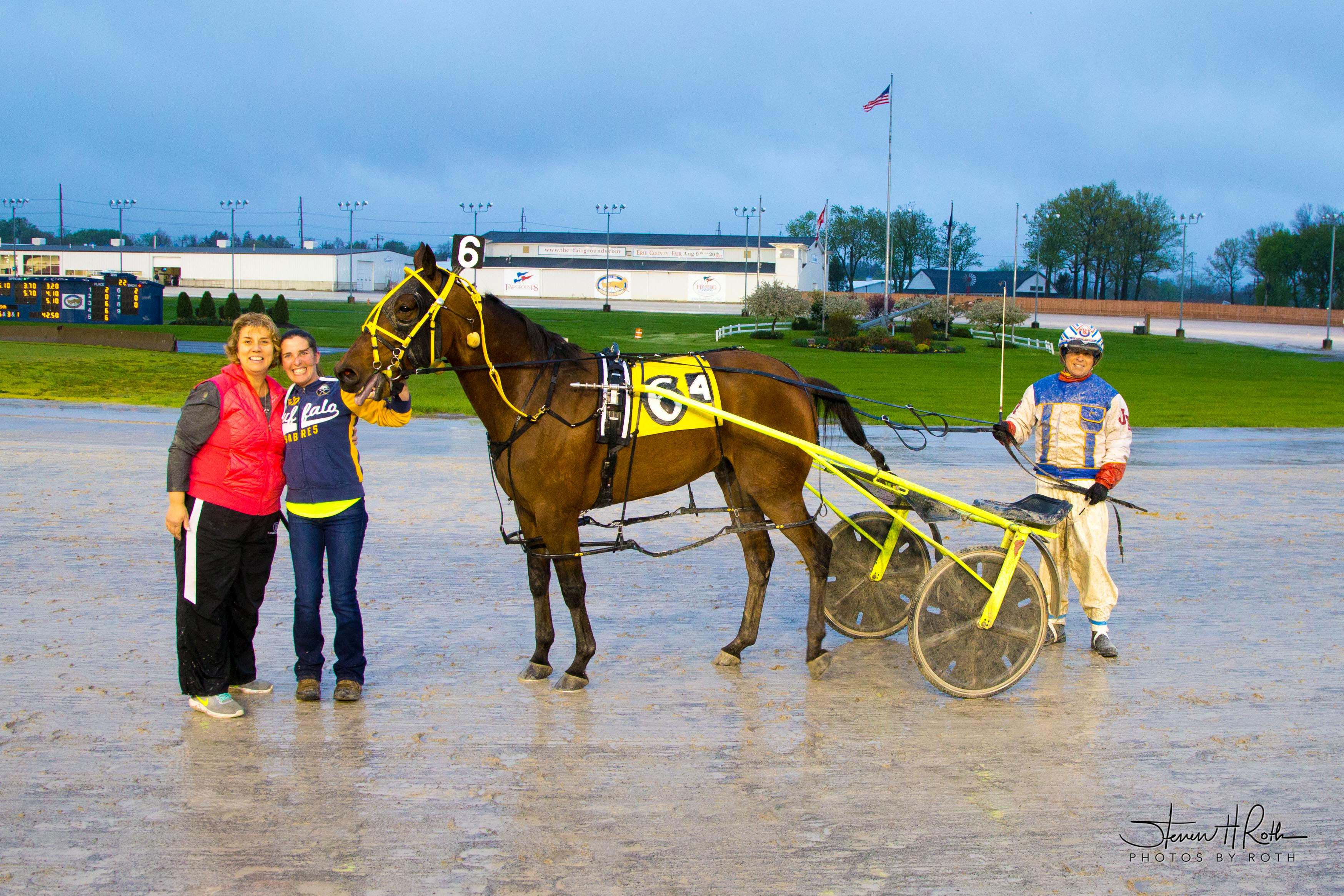 NEW YORK STATE OF MIND: Maria (second from left) and Jack Rice celebrated anohter Buffalo Raceway win lst may with China Dream, one of 20 horses in their stable on the Buffalo-Batavia circuit. Although Jack drove, and can boast many accomplisments as a NY reinsman, he said that these days he prefers training over driving. Photos by Roth.

If it can get around a half, Jack Rice wants it.

The 50-year-old western New York horseman admits he is in the minority among horsemen, but he prefers racing on smaller tracks and has molded his life to fit that passion. A former top catch-driver, Jack now operates a stable of 20 horses on the Buffalo-Batavia circuit with his wife, trainer Maria Rice, 37.

The pair met 18 years ago when Maria’s sister was working for Jack at her home track of Vernon Downs, where Jack was rising to become the top driver at the upstate New York oval.

“My wife and I make a good team,” Jack said. “She does the barn work and I look after things on the track.”

The Rice stable moves between Buffalo Raceway and Batavia Downs, stabling at the track during each meet, but commuting from their home in Hamburg, a short walk from Buffalo Raceway, all year. It is during the Batavia Downs circuit that life is more hectic, as the pair makes sure to be on the road by 6:15 a.m. every day for the one-hour commute.

When the barn work is done at Buffalo Raceway, the Rices will generally go back to their Hamburg home until returning for races or feeding later in the day. But when the action switches to Batavia, the long commute negates a trip to relax in their own surroundings, leaving Jack to other devices.

“I sit in my tack room in the afternoon and drive myself crazy,” Jack said. “I do my homework, look up horses and watch replays and go on Facebook. I probably drive the world crazy, too. I get obsessed. I’m always looking to buy.”

Leaving Vernon was hard for Maria, but she has grown to love racing in western New York.

“As long as we can stay in western New York, we’re going to stay there,” Maria said. “I like the circuit and I like the area. There are three people working for us right now plus me and Jack.”

The statement from the fairer half of the Rice marriage is truer than she may have intended. Jack is active on social media, namely Facebook, posting every day and constantly on the lookout for horses that are “good on a half.”

“If people would realize how many horses I bought recently off of Facebook it would blow their minds,” Jack said. “Without the internet I would be in trouble getting horses. I used to be big into claiming horses, but I don’t like doing that anymore.”

It was advice from Michigan friends Henry and Lynn Wilson that encouraged the Rices to relocate to Buffalo Raceway.

“Lynn and Henry hooked up their six-horse trailer and loaded up our horses out of the kindness of their heart and helped us move,” Jack remembers of the 2013 decision.

“It was one of our best decisions. I wouldn’t trade it for the world.”

The Wilsons kindness did not end there as they also gave the Rices former Michigan trotting champion Keyodee Star to train. Now, after four years on the circuit, Maria was fourth amongst trainers for earnings during the 2017 Buffalo Raceway meet from January to July, then excelled even more during the move to Batavia Downs for the July to December meeting where the Rice barn was second for training earnings and third for dash wins. The barn also regularly made the three-hour ship to Northfield Park in Ohio on Monday nights throughout much of the summer to race in the open classes.

Both Rices admit a big part of their success is their 50-50 partnership with Marc Vogel of Vogel & Wags Nags Stable. 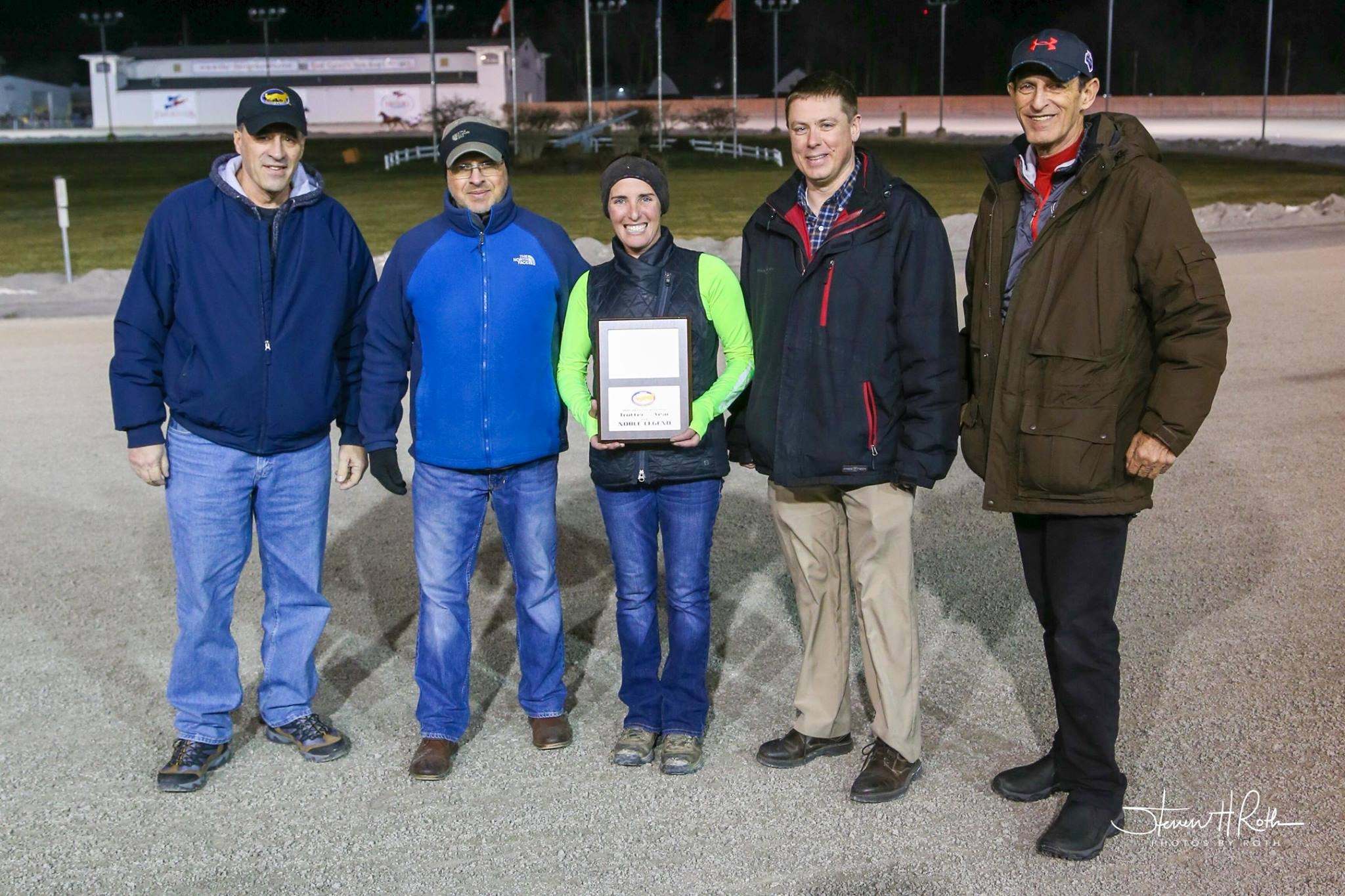 ‘BACKBONE’: The Rices enjoy a 50-50 partnership with Marc Vogel and Wags Nags Stable (far right), and in 2016 reaped the rewards of their partnership’s success by receiving the Trotter of the Year award for Noble Legend at Buffalo Raceway.

“He would let me buy Eeyore,” Jack said with a laugh. “He gives me full autonomy. We go partners and he always says he likes that I put my money where my mouth is. He is our biggest fan and the greatest partner. To have a great owner like that is the backbone of any good stable.”

Jack believes another key ingredient of success is having horses fit at all times.

“No matter what the weather is, as long as the track is open, we jog our horses,” Rice said. “That is a main key to our success to have our horses in shape. Pick the worst day of weather and look over the fence and whoever is out there jogging, those are the people that are successful. It is like that at every track you go to.”

Aside from the training partnership with his wife, Jack has a healthy list of accomplishments in the sulky, including more than 1,400 wins, $5 million in purses, three dash titles at Vernon Downs and a win in Russia while representing the U.S. at the Annual International Driving Tournament at the Moscow Hippodrome. The reinsman also scored track records at Vernon Downs, including a 1:50.3 standard for 4-year-old pacing geldings set by the Mark Ford-trained River Shark and a 1:50 track record for 4-year-old pacing horses set with He’s Gorgeous for Tracy Brainard. He also frequented Grand Circuit action at one point for the Jimmy Cruise stable with horses like Well Budgeted, Magical Leah and Earl Hanover.

But now the fence is where Jack views his horses’ races after rolling back his role in the sulky shortly after the move to western New York.

“Everyone wanted to be a driver, but training I always took seriously,” Jack said.

“I lost my passion for driving. Back in the day it was a much more popular thing to do and I was younger. I get hard on myself and I just decided to give it up. But if I can’t make a living training I will go back to driving again. But right now the 5 percent isn’t making or breaking me.

“I am a firm believer any track you’re at you need to use the top drivers; it is such a major advantage, no matter what anyone tells you. When I was the top driver at a track we raced at, it was a big advantage.”

Even riding high with powerful accounts to drive for, Jack decided training was a more stable way to make a living for his family, which includes his sons Jonathan, 25, and Justin, 22.

“The more I drove, the more I would sooner be training,” Jack said.

“Driving other people’s horses you give them a chance and they love it. Get what you can get. I was half a cowboy when I was younger, but the trainers wanted their horses raced and I was successful. Driving your own is a whole different ballgame. I was always told when you have to dump their feed in the next morning it makes a difference. Sometimes it would hurt my feelings if I drove one hard then came in the next day and saw them lying down. I take it hard. Next thing you know when you’re saving your horses and not getting money, you’re saving nothing.”

But everything good in his life in racing comes back to Maria, Jack said.

“To this day we have never had a fight,” he said. “Been together 18 years and never once had a fight and we work together every day. If there is an issue we just remain silent and trust me, silence is worse than any yelling possible.”

Previous: Charlie Williams is 2017 Caretaker of the Year
Next: Mutuel Feeling: Up and Downs