Standardbreds are consistently showing their versatility, whether it’s for riding or driving, for show or pleasure, Hoof Beats is happy to share stories from readers about their favorite Standardbreds. This month, Charlotte Gelston writes about the shifting hierarchy in her pleasure horse herd.

Equine herd dynamics has always fascinated me. We have had many horses staying or boarding on our property over the last 27 years. The herd has fluctuated from the original one (the first free horse we adopted for our daughter) to 11 (the summer I overbooked boarding due to friends needing temporary housing for their horses.)  The average occupancy was 6-8, which was a more manageable number.

Each time a new horse would arrive, the herd would jockey to re-establish the ranks of dominance. If the current alpha (boss) horse could intimidate the newcomer, he or she would remain the dominant leader, with the new one finding his place among the herd. If the new horse could outrank the boss, the new arrival would reign supreme. The rest of the horses would rearrange themselves in order of dominance. Points of dominance are age, color, longevity on the property, sex, and finally, the most important factor: the horse’s basic personality type.

Age: The older horse is usually more dominant than the younger horse.

Color: The darker the horse’s color, the more dominance it carries in the herd.

Longevity on the property: Usually the horse that has been in a location the longest is dominant over any newcomer.

Sex: Mares are usually dominant over geldings. Stallions are dominant over both mares and geldings, with the exception of the alpha mare, who shares different responsibilities with the stallion.

Personality:  Horses, like people, have varying degrees of assertiveness. The most assertive will take over leadership of the herd, regardless of other points of dominance.

Long before our current barn was built, we made do with run-in sheds in the back pasture, which was seven acres of open fields and woodlands.  There was no way to segregate new horses from the ones in residence, but there was ample room for escape from an overly aggressive boss.

With the alpha horse and the newcomer both haltered, in case a quick exit was necessary, we would cautiously bring the two horses near each other. Each of us was careful to stand to the side as we let them say “Hello.”  Meanwhile, the other horses watched eagerly to see who would come out on top in the pecking order.

One memorable occasion was when our established herd had grown to five: three mares and two geldings. “BJ,” the older, hotter gelding, was the alpha of the herd. His partner, the oldest mare called “Lissa,” was the alpha mare. “Jared,” the 7-year-old handicapped black gelding, had been on the property the longest. But he was outranked by BJ’s personality and age. The fact that BJ had not been gelded until he was 8 years old no doubt contributed to his dominant personality. Jared didn’t want to be in charge, so that was not an issue. His best friend was a mare called “Isis,” who had come from the same breeding farm. Then at the bottom of the herd was “Lexie,” a young chestnut mare, the lightest in color.

When my friend Margie and I acquired “Gatsby,” a 20-year-old gelding, it brought the number to six, with equal numbers of mares and geldings. The only problem was that Gatsby decided he should take over the herd! 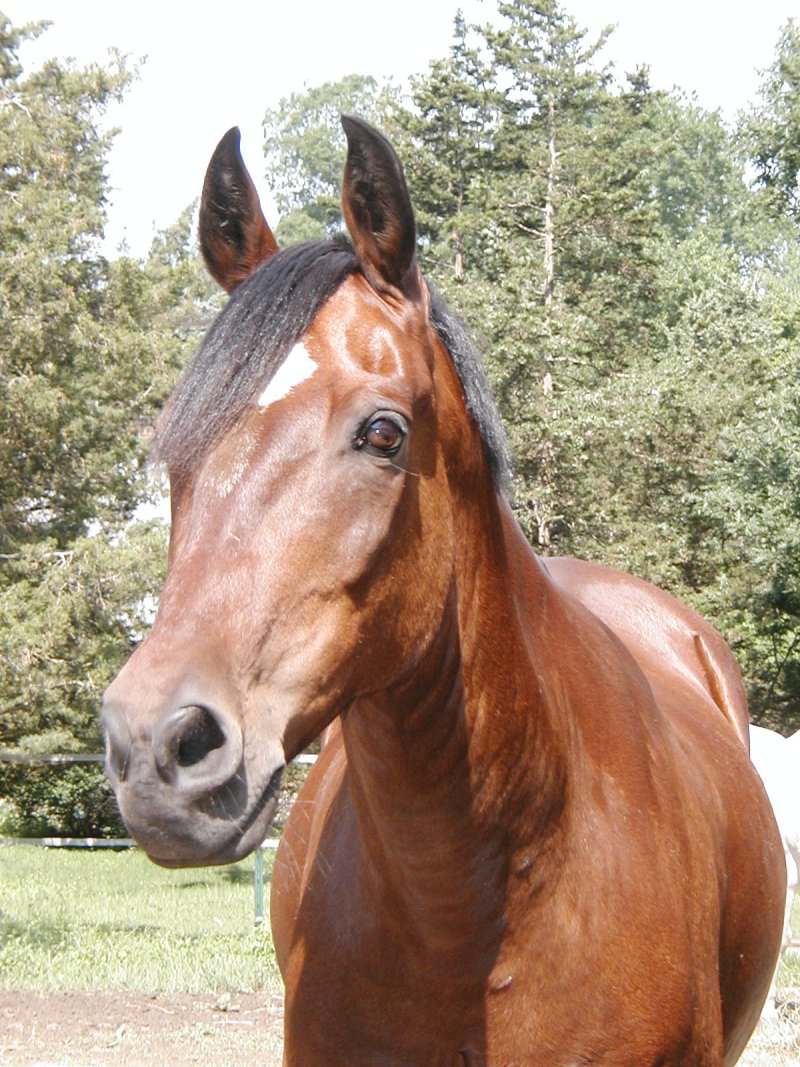 Upon his initial introduction, Gatsby attempted to establish control of the heard.

At their introduction, I had BJ in hand, and Margie had Gatsby. BJ squealed and struck out first, confident that his darker color, tenure on the property, and assertiveness would guarantee submission from this new fellow, who was also three inches shorter in stature.

However, Gatsby immediately copied him.  With a startled expression on his face, BJ increased the pressure by rearing to his full height. That should make the interloper back off! It didn’t, as Gatsby reared right up as well.

BJ, astounded by the newcomers’ audacity, paused to think. Then he deliberately turned around, threatening Gatsby with his huge hindquarters. Faced with the possibility of a double-barreled assault, Gatsby shrewdly backed up, signifying submission.

He who intimidates best, wins. Thinking the contest was over, we let both horses loose to rejoin the herd.

All went well with the other horses meeting Gatsby, who informed each of them that he was planning to be the second in command, if not first. It took an entire week before he gave up trying to usurp BJ’s position, but finally settled into second. Lissa, the oldest mare, was impressed by Gatsby’s attitude and paired up with him. Lexie saw her chance to become BJ’s girlfriend, so she moved up from the bottom of the herd, although Lissa maintained her alpha mare status. Jared and Isis were content to be the lowest in rank. 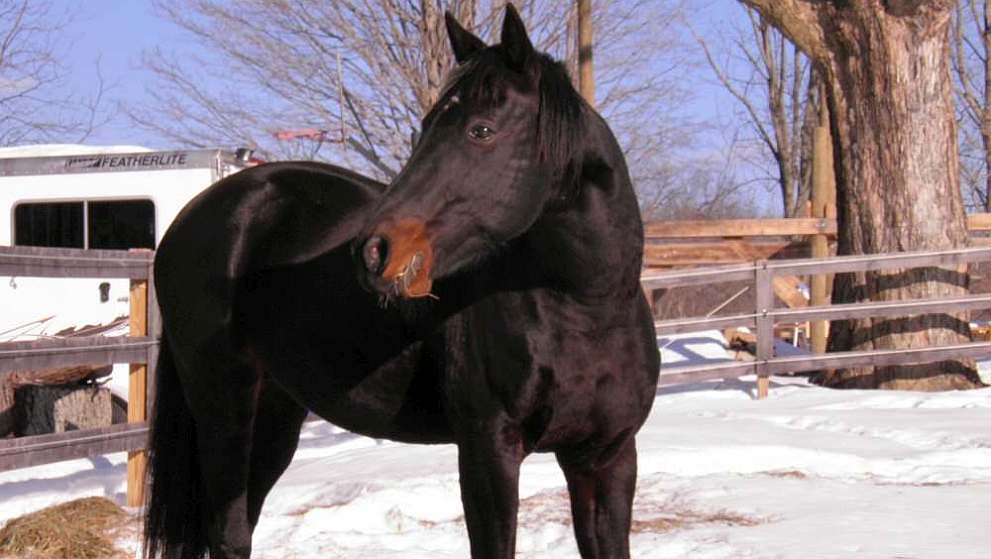 DON’T MESS WITH ME: The gelding BJ possessed several points of dominance that served him well in a herd setting: dark coloring, many years on the property, and an assertive personality. This combination thwarted the audacious efforts of Gatsby to establish dominance when he met BJ, even though he was 12 years BJ’s senior. Photos courtesy of the author

Once hierarchy was established, the herd was stable and very happy. They paired up into three mare/gelding combinations. I could actually lead all six of them the third of a mile walk from the back pasture to the west pasture across the street. As I haltered and lined them all up, BJ would glare at each of them as if to say, “Don’t you dare give my human any trouble!”

I held three lead ropes in each hand. BJ and Lexie were on my right and left, Jared and Isis on the dragline in back, with Gatsby and Lissa, as alpha mare, leading. When I said, “Walk on,” all six would proceed to walk in double-file, each pair keeping the correct pace and distance from each other, fearful of the retribution from the boss if they caused any trouble.

At the end of the driveway, I would call out “Whoa.” They stopped. I looked to the right, then to the left, and if it were clear I said, “OK. Walk on.”  Simultaneously they all started up again and crossed the street. Before long, they would all look right and left with me.

I knew it was BJ keeping them in order, not me. However, since I was BJ’s chosen leader, he always listened to me. He made me look good.

Previous: Game Changer: Off and Pacing App
Next: Mutuel Feeling: Hold the Line

183 More posts in Hoof Beats Magazine category
Recommended for you