Prior to Thursday’s Little Brown Jug final, trainer Ron Burke and driver Yannick Gingras decided that, win or lose, they wanted to send Filibuster Hanover to the front at the start of the race.

Filibuster Hanover, starting from post No. 2 after his second-place finish to Fear The Dragon in the day’s earlier first heat, got the lead and never looked back to win the $401,472 Little Brown Jug final for 3-year-old male pacers by a length over Funknwaffles in 1:50 at the Delaware County Fairgrounds. 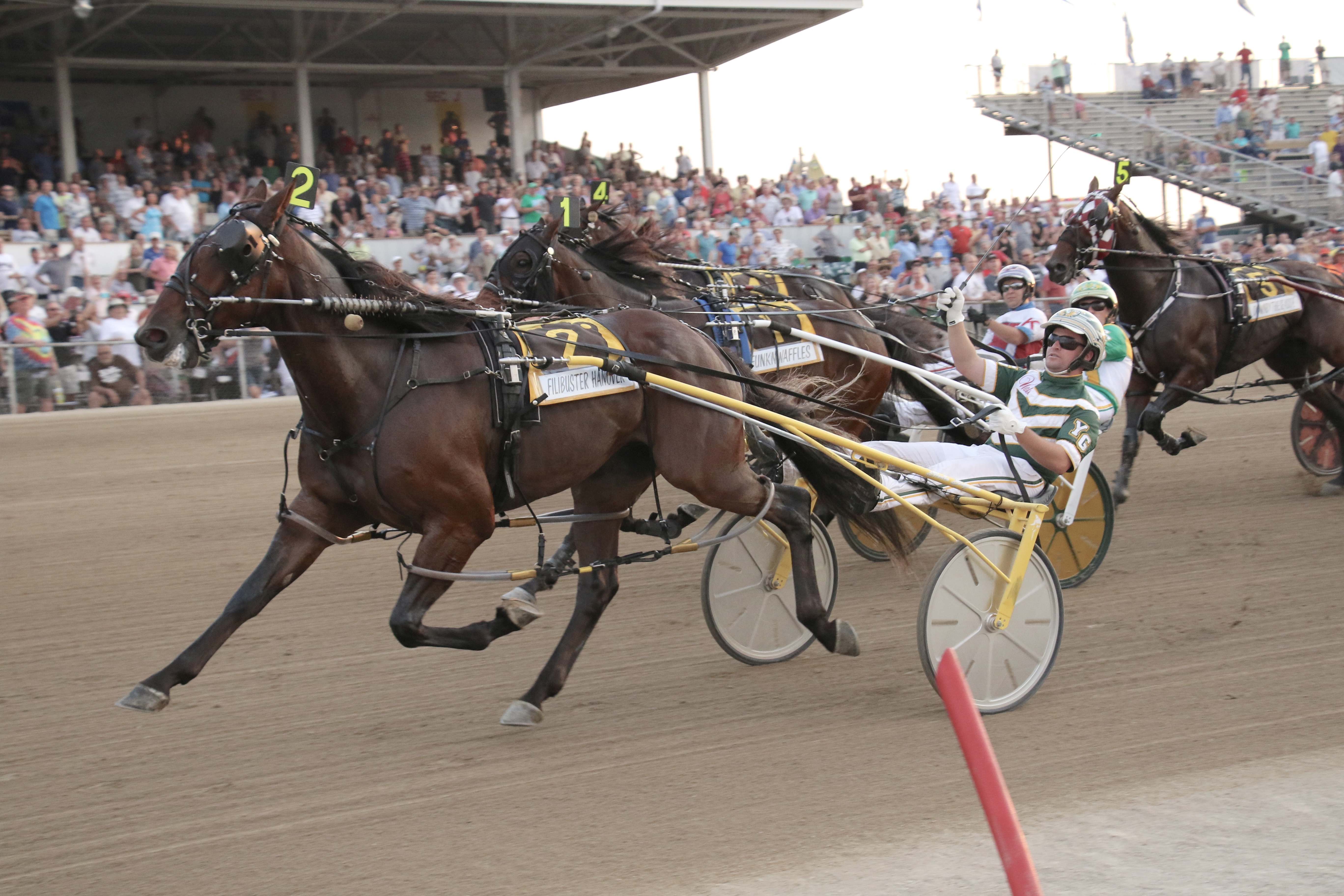 Miso Fast, another horse from the Burke Stable, finished third and Fear The Dragon was fourth in the 72nd edition of the event, presented by the Ohio Harness Horsemen’s Association.

It was the second Little Brown Jug victory for the tandem of Burke and Gingras, who won in 2014 with Limelight Beach.

“After the first heat we knew he was sharp,” Burke said about Filibuster Hanover. “We knew if we could get around (Fear The Dragon in post one) we could control the race from there. We both decided we would go down the road; if we got beat, we got beat.”

Added Gingras, “All year we said when he comes to the Jug we thought he could pop a huge mile on the front. I thought he was the best horse in the elimination, I just was locked in. I had a fresh horse going into the final. If I could get around (Fear The Dragon), I would have parked anybody.” 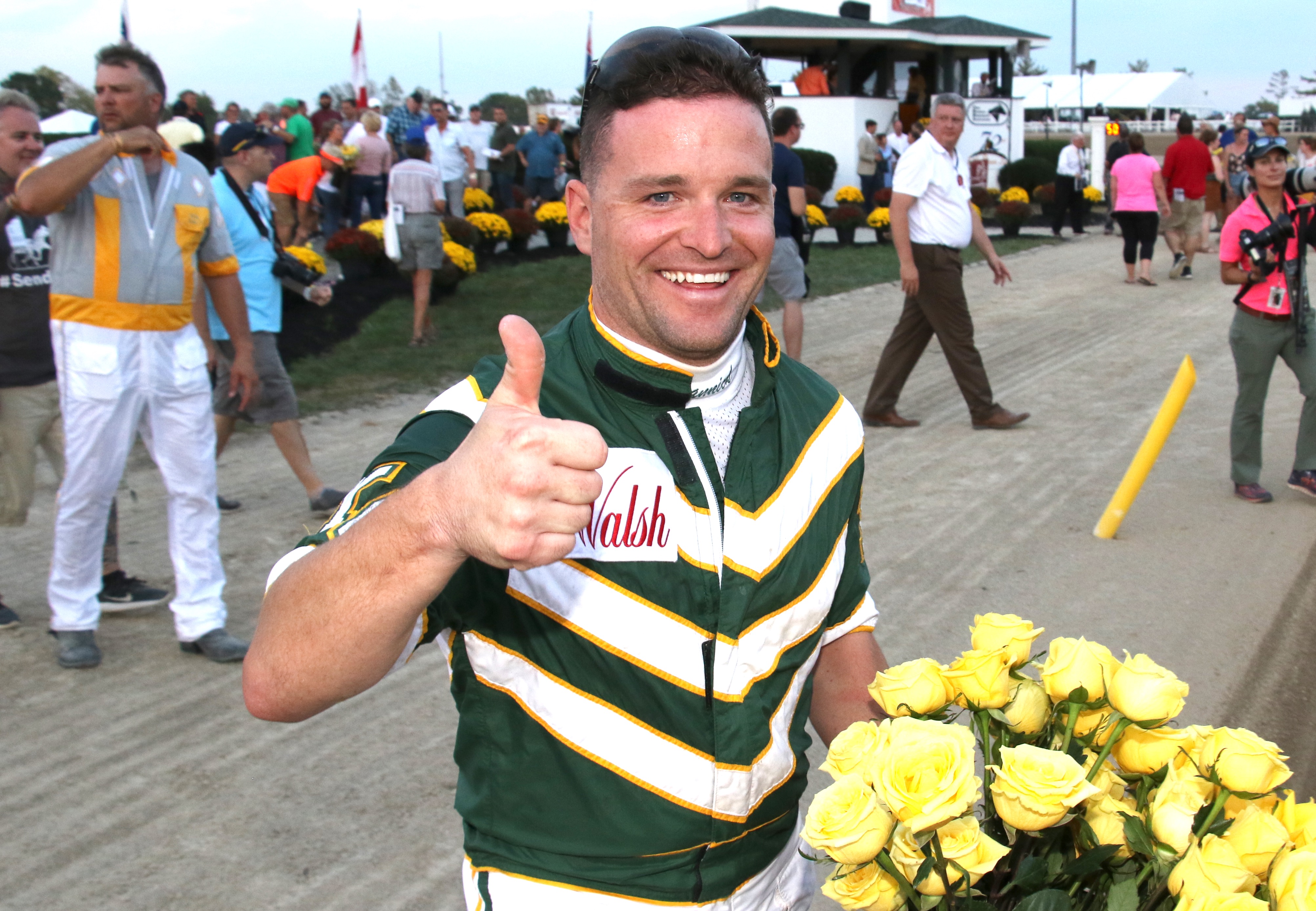 Fear The Dragon, who was in fourth, tried to advance on the outside, but ran into traffic trouble and was unable to make up ground. At the top of the stretch, Filibuster Hanover was 2-1/2 lengths clear of the field and on his way to victory.

“I thought it was a good race,” Gingras said. “I thought we went at it pretty good for the second heat of the Jug. Obviously we came out on top, so I’m happy.”

Filibuster Hanover is a son of Somebeachsomewhere out of the mare Fashion Ecstasy. He is owned by the Burke Racing Stable, Joseph DiScala Jr., J&T Silva Stables, and the partnership of Mark Weaver and Mike Bruscemi. He was bred by Hanover Shoe Farms and was purchased for $90,000 at the 2015 Standardbred Horse Sale.

Although Filibuster Hanover entered the Jug with only two wins in 12 races this year, the gelding’s recent form had resulted in a win followed by three second-place finishes heading to the final.

Burke was unconcerned about Filibuster Hanover racing twice on the same day.

“It’s just another day in the barn for our horses,” said Burke, who leads North American trainers with 625 wins this year and more than $13 million in purses. “They’re used to working hard, they’re used to doing this. It’s not a big deal.” 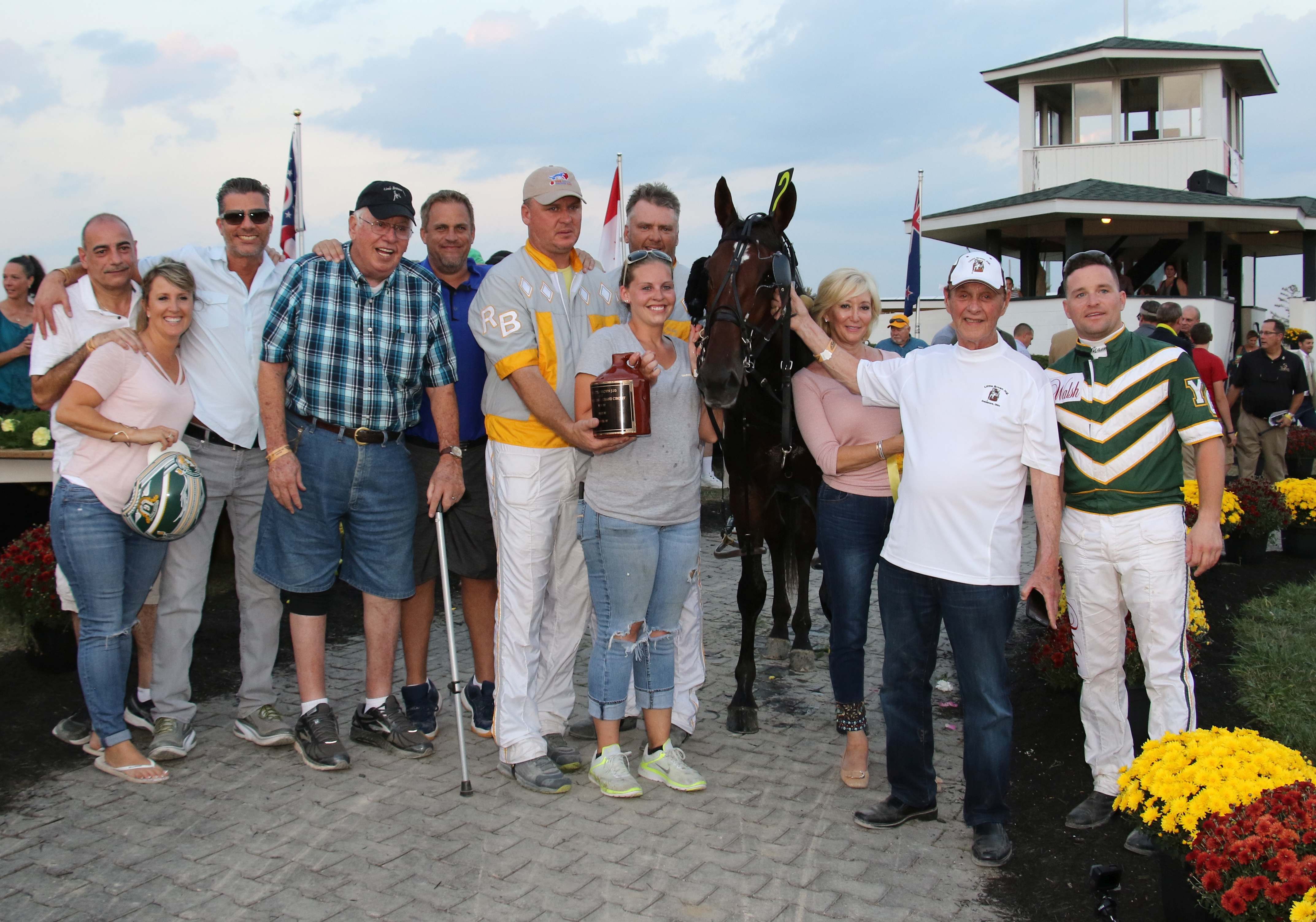 Trainer Ron Burke has said before that the Little Brown Jug is one of the races he gets truly emotional about winning. Mark Hall/USTA photo

Winning a second Jug, though, was a big deal, just as nice as the first.

“I didn’t think it would be, but it is,” Burke said. “It didn’t look earlier in the year like this horse was going to get here and now he’s turned it around. It’s satisfying. We’re thrilled.

“We always thought this horse had ability but it took us some time to figure him out,” added Burke. “We didn’t really make any changes and just needed to work some things out.

“We thought he could be the horse to beat because of the way he was coming into the race and we were very happy with his post.

“We also might have caught Brian’s (trainer Brown) horses (Fear The Dragon and Downbytheseaside) at just the right time as they have been racing hard where this horse is fresh. You just never know but we did think this horse was very capable of winning this race.” 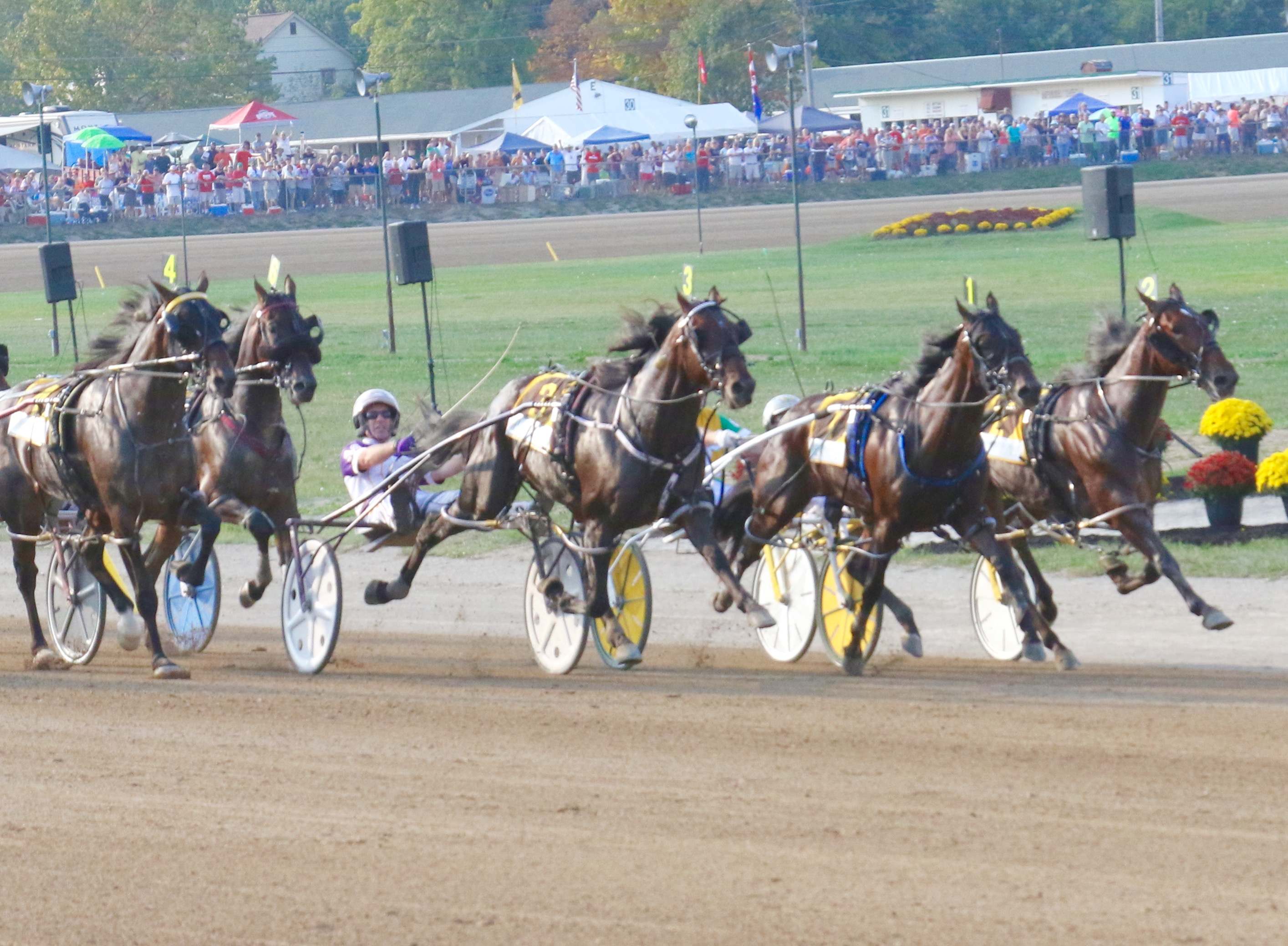 Fear The Dragon (3) came out on top of a tight finish in the opening heat of the Little Brown Jug. Mark Hall/USTA photo

Fear The Dragon led a wall of five horses across the finish line to capture Thursday’s (Sept. 21) $188,928 first heat of the Little Brown Jug for 3-year-old male pacers in 1:50.3 at the Delaware County Fairgrounds.

The order of finish determined the starting spots for the final. The complete order of finish was Fear The Dragon, Filibuster Hanover, Funknwaffles, Miso Fast, Downbytheseaside, Boogie Shuffle, Chip Walther, and R J P (who scratched from the final).

Funkwaffles got the early lead from post No. 1, with Filibuster Hanover second, Boogie Shuffle third and Fear The Dragon fourth. The field reached the opening quarter in :27.1 and the half in :55.3.

By that time, driver David Miller had Fear The Dragon in motion, first in the outside flow. Fear The Dragon was second to Funknwaffles as they hit three-quarters in 1:22.4 before surging to the lead. Miso Fast and Downbytheseaside were three wide on the final turn and joined the top horses to string five wide across the stretch.

Fear The Dragon, the No. 1-ranked horse in harness racing’s weekly poll, won by a neck. He has won 11 races this year for Delaware County Fairgrounds-based trainer Brian Brown and owner Bruce Trogdon’s Emerald Highlands Farm.

“I was happy with him; I thought he raced well,” Miller said. “I was a little worried (Funknwaffles) might have gotten too soft a half, but my horse held game like he always does.

“My horse went a big middle half. I think that made a little bit of difference with him finishing there.”

“I’m very relieved Dragon put in the race he did,” Brown said. “That was tough being first up. He’s always been this kind of horse. He’s not always been perfect, but he still puts in that kind of race.

“He always likes to come from behind. First over doesn’t seem to bother him. He’s always there at the end trying his heart out.”

“This horse doesn’t really want to be on the lead,” added Miller. “That is the kind of trip he prefers. I’m not saying he can’t do it in other ways but this horse is just really, really game.”

–by Ken Weingartner, with contributions from Kimberly French

Previous: For The First Time
Next: Jug Week Handicapping Review

47 More posts in Little Brown Jug category
Recommended for you 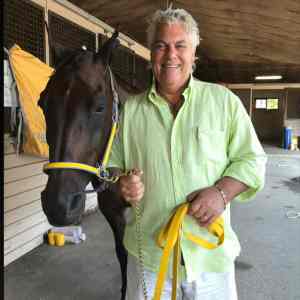