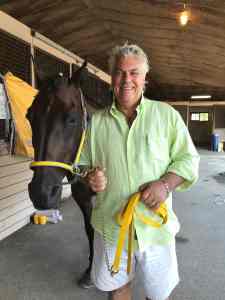 DELAWARE, OH – A bucket-list item was taken care of Wednesday and Thursday, days spent in the Buckeye State, specifically in the friendly confines of the Delaware County Fair and, more to the point, bearing witness to the Jugette and the Little Brown Jug, run respectively Sept. 19 and 20.

The Little Brown Jug held significance to me in that, as a native of Saratoga Springs, N.Y., and having grown up about a mile from the local harness track, I have a memory of “LBJ” winners Most Happy Fella and Bret Hanover coming to town, and I had the chance to see Albatross and his best son Niatross compete, Albatross winning easily and Niatross, for reasons unknown, ducking in and taking a dive over the inside rail.

(I smuggled a Super 8 camera into the track that day and have that flop – which occurred right in front of me and some friends – on film somewhere in the house.)

The Jug also has some significance to upstate New Yorkers like myself who have an appreciation of history and accomplishment: The race was won five times as a driver and six times as a trainer by Billy Haughton, who grew up about 30 miles west of Saratoga.

The Delaware County Fair has been in existence since the 1830s and neither of its marquee races needs an introduction to this audience, as both have long been important events on the harness-racing calendar: The $436,560 Jug had its 73rd running and the $230,700 Jugette its 48th, and they highlight the annual five days of Standardbred sport here.

This year’s Jug carried added significance as the brilliant Stay Hungry was attempting a sweep of pacing’s Triple Crown, having accounted for the Meadowlands’ Cane Pace in August followed by Yonkers’ Messenger the first day of this month.

Coverage of the Jugette and Jug can be found on the pages of www.ustrotting.com: My assignment was to take a walk through the grounds, see what I could see – what a regular visitor might see – and to document it.

That I thoroughly enjoyed what I documented was a bonus.

Each day was steaming hot, with humidity high and temperatures climbing into the upper 80s.

New to the fairgrounds layout, I unknowingly parked about as far from the backstretch as you can, leaving a long but thoroughly enjoyable walk to my first destination, the tent shared by the United States Trotting Association and the Ohio Harness Horsemen’s Association.

Also passed along the way were examples of what was once known as American ingenuity, flashes of brilliance in the form of flatbed trucks decked out with stairs and elevated seating to provide the perfect lookout to oversee not just the racetrack but all its surroundings, as far as the eye could see. Not surprisingly in this town just a few minutes north from Columbus, many of the canopies and adornments carry the proud red and gray of Ohio State University.

All are welcome to stop and say hello, although Michigan fans may find less intimidating surroundings if they search long enough.

I found a different adaptation for the term “reserved seating” nearby: old-school folding chairs, the ones with the nylon webbing, were tied to the chain-length fence that surrounds the track. Those land-claims, made a few days in advance, are universally respected by fellow fair goers here.

The USTA’s Speaker Series, through its Harness Racing FanZone, and smoothly hosted by Michael Carter, was conducted in the tent on both Wednesday and Thursday mornings. There were two sessions on Jugette Day (Julie Miller, David Miller and Ron Burke spoke at 9, Matt Kakaley, Aaron Merriman and Montrell Teague spoke at 10) and three Jug Day (Dave Brower, Roger Huston and Wendy Ross led off at 8; Yannick Gingras, Doug McNair and Tony Alagna came on at 9 and Hall of Famer John Campbell wrapped up the late show at 10 all by himself).

All involved put on a solid, informative show, cheerfully fielding questions from Carter as well as from a near-capacity audience Jugette Day and an overflow crowd Jug Day.

Concluding my introduction to the backside on opening day, a brief stop in the Log Cabin Race Secretary Office provided not only relief from the heat with an alpine feel but also an impressive gallery of photos of Jug-winning drivers.

Relief from the heat could also be found in the grandstand, humongous in terms of the racing fairs I’ve come to know from Arizona to New York and Massachusetts. Plenty of comfortable seating with great views could be found Jugette Day; not so much on LBJ Day.

Wagering can easily be found backside, frontside and even on the turns, but, while finding a place to bet isn’t difficult, it can be a stiffer-than-usual intellectual challenge: Not only are the fields competitive, but the minimum “straight” bet is $2, and the minimum on exotics is $1, provided that the total amount wagered on that ticket reaches or surpasses the $2 mark. The super player accustomed to betting a cavalcade of possibilities on 10-cent wagers elsewhere likely will want to hone his or her handicapping skills when betting here.

This is also a place where betting with a human teller is much preferred; lines at the machines were thin if they existed at all. (PS, tellers’ tip buckets are not hidden here.)

Armed with some familiarity of the grounds, finding a better place to park and wandering freely Jug Day on my second day here, the biggest day of the fair.

First post was 11 in the morning but the grounds were packed well before then, and there were plenty of attractions for the early birds.

Not only was the popular Speaker Series underway, but contending for attention at the same time was an autograph session open to one and all, featuring the drivers who would contend the Little Brown Jug, and, at least as popular, a meet-and-greet session with the hugely popular gelding Foiled Again.

The 14-year-old – winner of 102 races and earner of $7.6 million – has been doing his thing since 2006 for trainer and co-owner Ron Burke, but this will be his last year of employment due to mandatory retirement rules.

Leading up to his retirement, Team Burke, under the auspices of the USTA’s FanZone, has put together a farewell tour for their superstar that includes Northeastern and other Midwestern venues, with a final appearance Dec. 31 at The Meadows in Pennsylvania.

Under the heat and high-pressure of Jug Day, Foiled Again, Murphy, Burke and associates could not have been more gracious as fan after fan walked over to meet the champion, take hold of his halter and beam while one of Burke’s staffers took photos using the fans’ own phones.

Simultaneous to these events, in another attraction unique to the Delaware County Fair, fans could walk into one of its beautiful, well-appointed paddocks and inspect the Jugette and LBJ contenders: The paddocks were open to fans from 8 a.m. to noon on raceday.

Jug and Jugette days provided a fantastic experience for this first timer, meeting every expectation.

Just for reference, I Googled “Trip Advisor” to compare my thoughts to those of others. Most were, predictably, very favorable, with one exception: Evidently a Brit came to town and, unable to differentiate Midwest Americana from Ascot or Chantilly, noted his “camembert starter too cold” (sic); “ham egg and chips okay but plate was cold”  and a burger that came without blue cheese. With that said, he did give points for “antipasti very good,” although he did knock the perceived attitude of his bartender and waitress.

The Brit’s comments, while caustic, got me hungry enough to think about wandering over to at least talk to someone at Bubba’s Bacon booth, and my fortitude was strengthened by an assessment from Kathy Doubrava, who handles food and beverage at Northfield Park.

Kathy is a native Ohioan who is familiar with Bubba’s bread and butter.

Stoking my courage – maybe with some well-disguised ridicule – she opened her left palm to the sky, followed by her right, and told me, “Look, it’s chocolate! And it’s bacon! What’s not to like?”

I definitely got the feeling she was telling me to hike up my skirt, man up and try it, even if I still thought the stick might be the healthiest part of the $5 treat.

The Brit should have met Brad from Daytona, the frontman at Bubba’s.

Brad was good about confiding to a stranger, and he introduced me to Ricky from San Diego, the chef in the operation. It turns out that “Bubba,” whose real name is Devan and who is from Connecticut (not what you expected?) was getting groceries when I showed up, or so the story goes.

So anyway, Brad walked me through the process: After Ricky cooks a big hunk of maple-smoked bacon, he puts it on the slicer and shaves off a strip; weaves a skewer through that strip, then dunks it in chocolate. After Brad wraps a napkin around the end of the skewer, it’s all yours.

The surprising part: It’s fantastic, with or without the blue cheese.

Mike Mullaney is the former executive director of the Agricultural and N.Y. State Horse Breeding Fund, former national features editor for the Daily Racing Form and former media relations director at Gulfstream Park among other things who made his first visit to the Little Brown Jug. 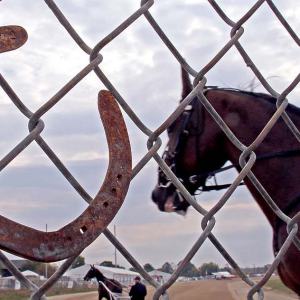