Chip Walther, a 3-year-old pacing colt who finished last season with a four-race win streak, was named by co-owner Mike Anderson in honor of a college buddy, Chip Walther. The two attended Western Illinois University together. Walther now lives in Wisconsin, where he keeps a watchful eye on his namesake.

“His friends thought he was a celebrity because he’s got a horse named after him,” said Anderson, who enjoys naming horses after family and friends. “He gets the biggest thrill out of it. That’s why I name horses after all these people, they just have a hoot. They watch them, it gets them involved, they just have a great time.

“Every time Chip Walther races he’s watching the race. And he gets a bunch of other people watching that normally wouldn’t be watching a harness race. That’s the fun part. When (the horse) finished last year with a bang (Walther) was all excited.” 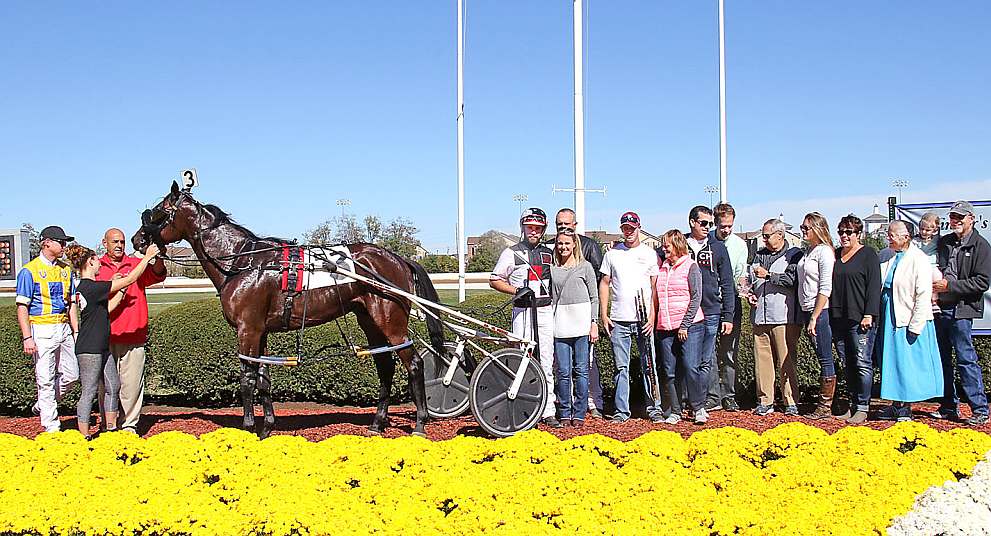 The excitement could continue and grow this year. The Erv Miller-trained Chip Walther is staked to a number of open events including the Breeders Crown, Cane Pace, Messenger Stakes, and Tompkins-Geers.

“We’ve got him staked to most everything except the North America Cup and Meadowlands Pace,” Anderson said. “We’ll let some of the other guys beat each other up a little and we’ll try to come on at the end of the year. Maybe at the end of the year we’ll be bravened up enough that we might have a shot at them, or a shot of getting a piece anyway.”

A son of stallion Art Major out of the mare Bittorsweet Terror, Chip Walther was purchased for $18,000 under the name Bently Hanover at the 2015 Standardbred Horse Sale. His second dam is stakes-winner Swifty But Nifty, whose offspring include millionaire Cam Swifty and multiple-stakes-winner Lonesome Day.

“We try to get some value,” Anderson said. “All the sires are pretty damn good; the difference-maker is the mama’s side. I liked the page and Erv said he liked the individual. He was just a tad on the small side at the time, but he doesn’t look so small now. He’s pretty close to average.”

Last year, Chip Walther won five of 14 races and earned $126,655 for owners Anderson (as Paymaq Racing), Erv Miller Stable, Nick Surick Stable, and Louis “Andy” Willinger. His only victory in his first 10 starts came in a Landmark Stakes at Goshen Historic Track. He was winning the Sheppard Pace at Yonkers before going off stride in the final turn.

“Early we were so disappointed,” Anderson said. “He trained down so good and we had really high hopes for him. But he was a little goofy in the head, a little immature. In the Sheppard I thought he was going to run off. He was up by three lengths and then he jumped off. We went from maybe having a big year to maybe not having a good year at all.

“Erv was real patient with him and didn’t press on him much. Sure enough he kept getting better, got a little more confidence. I couldn’t have asked for a better way for him to finish. We were very happy with him.”

Chip Walther began his four-race win streak with a triumph in a division of the International Stallion Stakes at Lexington’s Red Mile and capped it with a dead-heat victory in the Kindergarten Classic Series championship at the Meadowlands.

“We’re excited,” Anderson said. “He looks good. You’ve got to have luck and you never know how they’ll come back at 3, but right now you couldn’t ask for anything more.”

“R J P is coming back really good,” Miller said. “He’s really strong right now. We’ll see how far he goes. We were really high on him but then he got to where he was hard to drive in a race. We’ve been working with that. Hopefully he’ll be doing it the right way this year.”

Previous: Moving On Up
Next: A Different Kind Of Horsepower
302 More posts in Fan Zone News category
Recommended for you