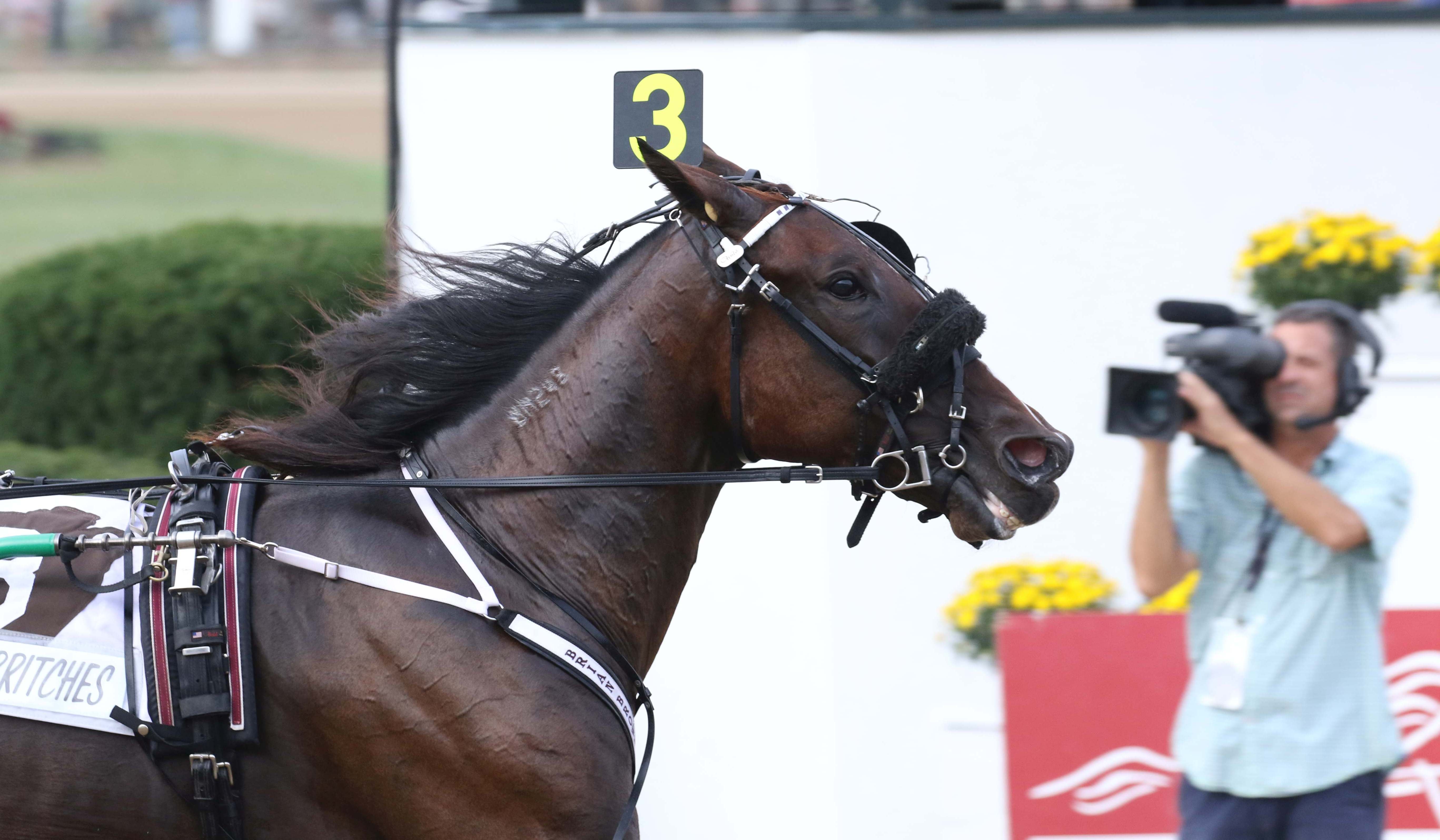 Blazin Britches won an elimination heat of the Jugette with regular driver Trace Tetrick aboard on September 20, 2017. Mark Hall/USTA photo.

Blazin Britches, a 3-year-old filly by Rock N Roll Heaven, has captured some of the top stakes in her class this year, including the Shady Daisy on Hambletonian Day and the Nadia Lobell and the Breeders Crown 3-Year-Old Filly Pace at Hoosier Park.

Despite her on-track success at 3, this precocious filly almost did not survive to see her first birthday because she could not inhale air into her lungs.

“In October (2014), just when we were getting ready to wean our horses, we found her in the field not breathing right and rushed her to the hospital,” said owner Bruce Trogdon, who bred the filly out of the Allamerican Ingot mare Soggy Britches at his Emerald Highlands Farm in Mt. Vernon, Ohio. “She was down and turning blue in the trailer; actually her gums were already blue, so the vet there immediately intubated her.

“She was found to have strangles, which was cutting off her windpipe.”

According to a 2004 presentation by the American College of Veterinary Internal Medicine, the infection Streptococcus equi is caused by bacteria that infiltrate the upper respiratory system of horses, donkeys, and mules. Known colloquially as “strangles” due to the swelling of the lymph nodes in the head and neck, or of the pharynx, making it difficult to breath, this disease is fairly common and was first chronicled in 1251.

Transmitted through direct or indirect contact with horses that carry or shed the virus, strangles is highly contagious and has demonstrated environmental sustainability, especially in water sources. While it can affect any horse at any age, young horses are particularly susceptible.

Strangles is also difficult to contain or eradicate as a horse can continue to shed the disease for a period of time. It can also suddenly reappear after a horse seems to have recovered.

“My groom noticed she wasn’t breathing quite right or actually breathing heavily a few days prior to the day she was down,” Trogdon said. “I vaccinate all my horses for strangles so the thought it could be that never crossed my mind. Not only that, none of my other horses were sick so there would be no way she could contract it.”

When Blazin Britches arrived at the hospital, the veterinarians immediately provided ambulatory care as the filly literally was at risk of dying from asphyxiation. Their first guess was she had contracted strangles. 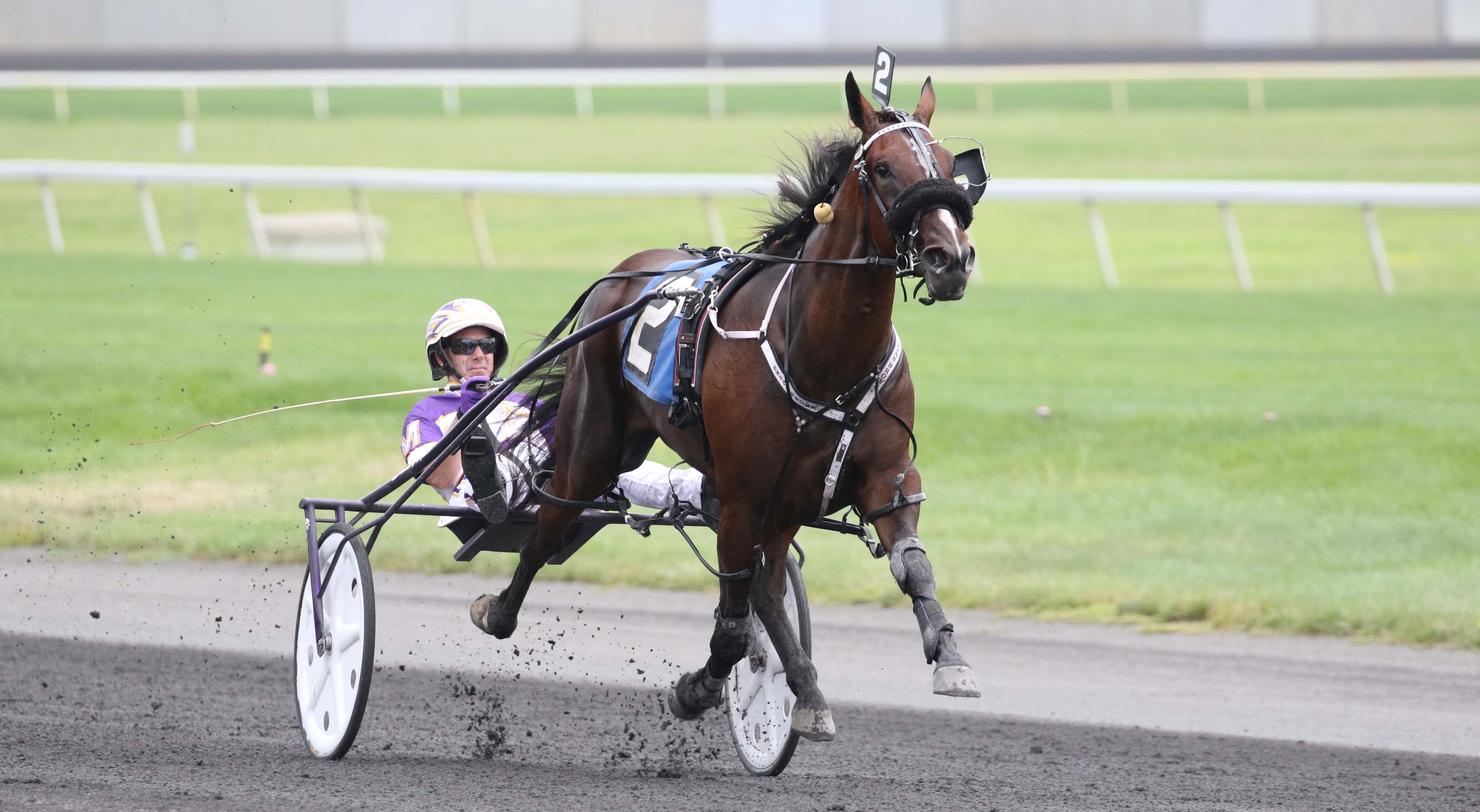 Blazin Britches won the Shady Daisy on Hambletonian Day in 1:48.4.

“I told them she had been vaccinated and there just could not be any way she had strangles,” Trogdon said. “They went ahead and did the tests for it and sure enough it was that. That’s when I realized she must have had a reaction to the vaccine.”

The efficacy of strangles vaccination has not been fully researched according to the American Association of Equine Practitioners. A 2009 article in The Horse describes some complications with the vaccination and why it is not always the best option.

“Because of some of these issues associated with vaccination, it seems inappropriate that boarding stables should require horses housed in their facilities to be vaccinated for strangles,” said Dr. Corinne Sweeney of the  University of Pennsylvania Veterinary School. “In fact, there are some instances when vaccinating a horse is contraindicated.

“The risk of your horse developing immune-mediated purpura hemorrhagica will increase if the horse already has good immunity (as determined by the ELISA test) to Streptococcus equi and then is subsequently vaccinated. Should your horse have a high titer, you may need to have your veterinarian notify the farm manager that it is ill-advised to vaccinate your horse and that your horse should be allowed to be stabled without vaccination. Because of these many issues with the strangles vaccine, it is best that the farm does not require vaccination prior to boarding.”

In Blazin Britches’ case, there was a complication from the administration of the vaccine.

“Tests showed that she got the strangles from the strangles vaccine and the company helped me with the bills somewhat, but I was very upset for this to happen to my princess,” Trogdon said.

Blazin Britches also suffered from another rare situation that occurs from the disease as the veterinarians, even after extensive efforts, could not reduce the swelling that was causing pressure on her windpipe.

“Besides the frustration experienced in dealing with horses affected by acute disease, strangles is not without its set of complications that arise subsequent to infection,” wrote Dr. Nancy Loving in the same article in The Horse. “About 20 percent of horses infected with strangles develop problems other than the basic upper respiratory signs. Some of the complications might be life-threatening, so an infected horse should be monitored closely following initial clinical signs.

“As an example, a Streptococcal organism can seed itself within lung tissues and cause bacterial pneumonia.”

Since the filly was still struggling to breathe after a period in isolation and various antibiotics being incorporated into her care regimen, a trach tube was inserted.

“I think she was at the hospital for about a month or so,” Trogdon said. “But I really wanted to bring her home and take care of her there. I put her and her mom, who was with her the whole time, in a round pen behind my house. She had that trach tube in for months. We had to take it out and clean multiple times a day.

“When we finally were able to remove it, it was so odd to watch her because her neck would move every time she would breathe with the hole in it, which obviously we kept clean as well.

“It wasn’t until May of her yearling year that I was able to mix her in with the filly herd, but the hole healed up perfectly. You would never even know that happened to her now because there is not even a mark from it.”

After contending with a stifle issue as a 2-year-old which limited her to only one start, Blazin Britches set the world aflame as a sophomore. The filly, conditioned by Brian Brown, commenced her 2017 campaign with four consecutive wins at Hoosier Park from April 8 to April 29, then finished second behind the older Miss Mady in a conditioned event at Hoosier Park on July 1. 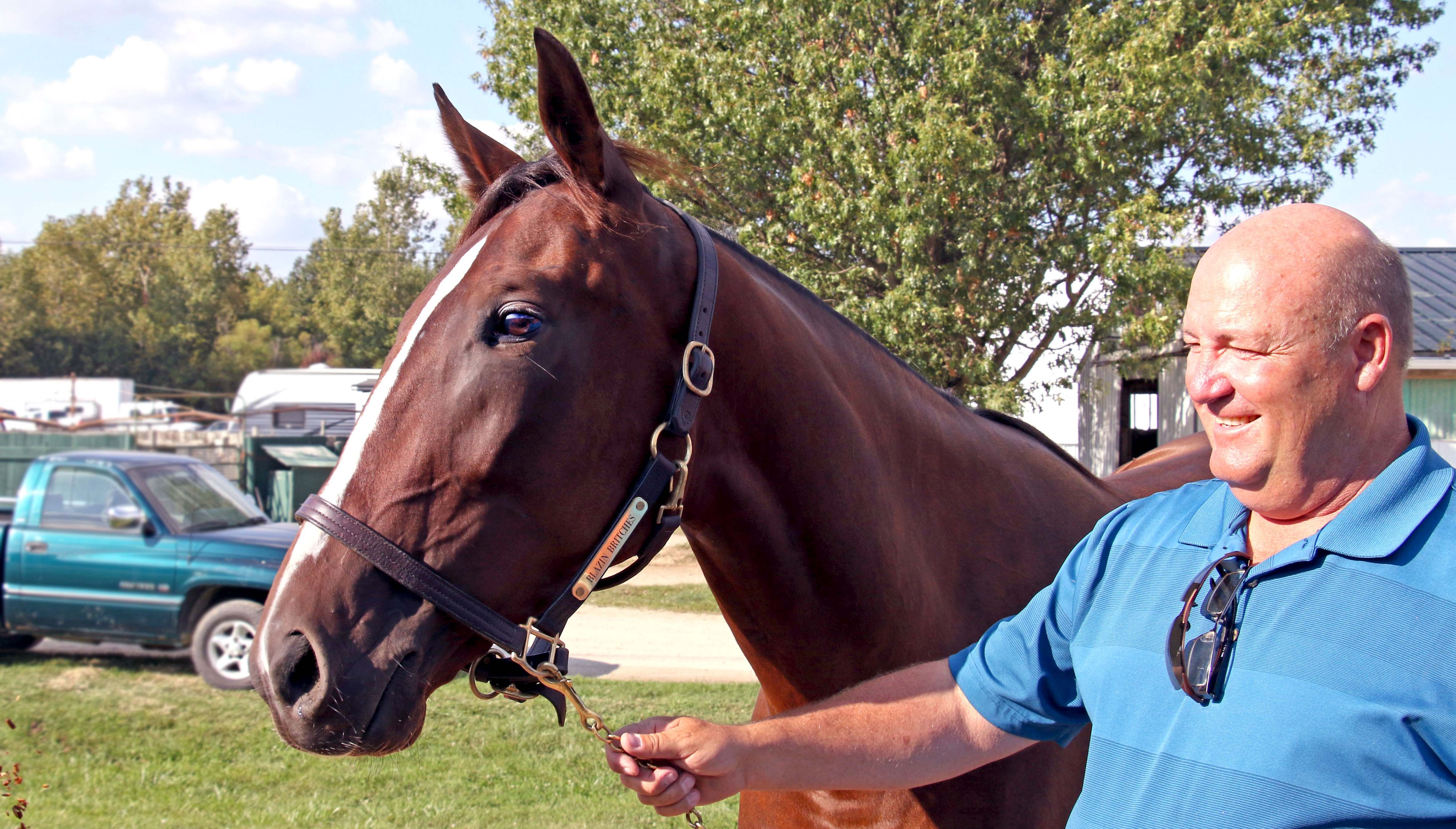 After that defeat, Blazin Britches, who is piloted by Trace Tetrick, reeled off six consecutive victories. Her triumphs include a $63,475 division of the Adioo Volo at The Meadows, a stakes-record performance (1:48.4) in the $113,950 Shady Daisy at the Meadowlands,  the $160,000 Nadia Lobell at Hoosier Park and a $54,650 Jugette elimination. She finished second in the Jugette final.

She has banked $540,424 and possesses a record of 16-11-2-0. Her most recent and most prestigious win came in the Breeders Crown 3-Year-Old Filly Pace on October 27 at Hoosier Park.

“I have loved her since the day she was foaled,” Trogdon said. “I think she is truly a great horse; a beast! I love her even more for everything she has already overcome. She is proof of the ‘great horses are not made, they are born’ theory.  She is my princess.”

To see more from the November edition of Hoof Beats click here.