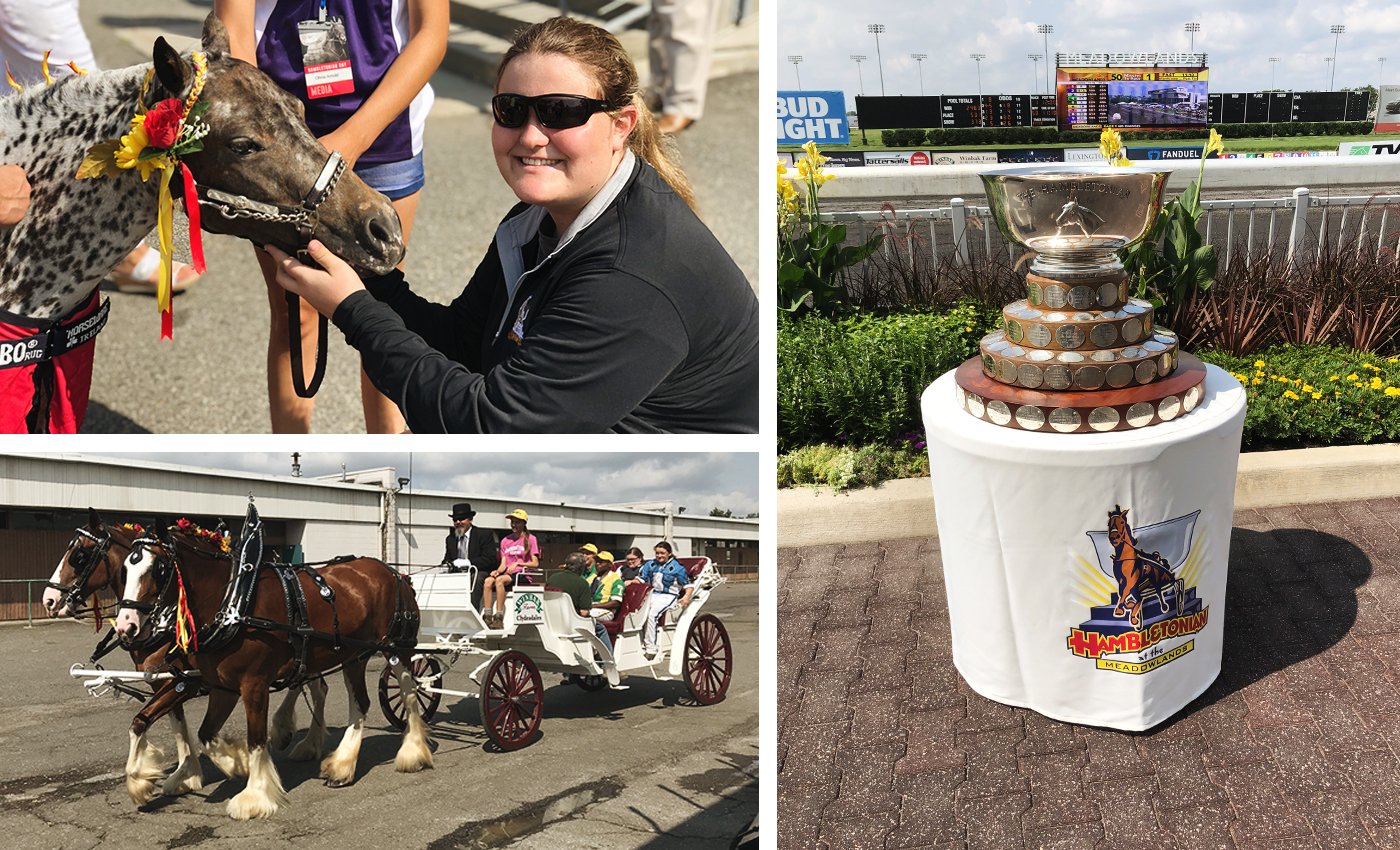 The 2019 Hambletonian was matched with beautiful, blue skies and sunshine. The grandstand was packed inside and out, from the first floor to the top floor. The atmosphere was jam packed with the sounds of cheering crowds and hooves beating across the stretch of the track.

The early part of the race card featured some exciting stakes races including the Vincennes Preferred, the James Doherty Memorial, the Peter Haughton Memorial, Shady Daisy and Sam McKee Memorial, where Lather Up and Montrell Teague set at new 1-1/8 mile record of 1:59.2 – the first time any horse has gone under 2:00 at that distance.

Races eight and nine were Hambletonian eliminations. Each race, including the Hambletonian, was headed by a trio of Standardbreds that prove just how much talent this breed has. Helene Gregory on JB, Kelly Marshall Conn on Xing The Delaware, and Destiny Sheard on Shift Into Glide made up this trio. These horses and riders also compete at the National Standardbred Horseshow, a show I was grateful to be a part of last year.

The first elimination race went to Green Manalishi S and Tim Tetrick in 1:50.3. Following him and also qualifying for the Hambletonian final were Osterc, Soul Strong, Gimpanzee, and Cantab Fashion. The second elimination was won in 1:50.2 by Hambletonian favorite, Greenshoe, and Brian Sears. The remaining field for the final were Don’t Let’Em, Forbidden Trade, Marseille, and Pilot Discretion.

Race 10 was the John Cashman Memorial, won by Crystal Fashion in 1:50.

Races 11 and 12 drew the most fans to the track apron, despite the blistering heat. Up first was the Hambletonian Oaks. Ten of the greatest 3-year-old fillies spread across the open wings of the starting car to the start line as the bell rang. When Dovescry, driven by Simon Allard and trained by Rene Allard, took the Oaks title in 1:50.2.

There was a sea of yellow as everyone had their promotional yellow Hambo hats on to fend off the sun. There was no walking through the crowds or getting close to the track apron. Luckily, I found myself on top of the photographers’ deck to take a video of the stretch drive.

Programs were up as bettors prepared to make their choices. Kids gathered around the winner’s circle or sat on their parents’ shoulders and chose their favorite horse based on what they looked like as they post paraded by. Ten horses filed out of the paddock one by one. After some time, the horses matched to their post position along the gate as it took off towards the front of the grandstand. They were let loose and the race began. To the wire in 1:51, by just a neck over Greenshoe, Forbidden Trade scored the upset with Bob McClure in the bike for Luc Blais.

The day was an exemplary picture of what this sport is all about. The packed stands; food trucks; and kids looking to their parents and saying how they want to do that one day, pointing at the driver in the bike. There was something to do for everyone, whether it was grabbing something to eat, going down to the pony rides, betting on the races, or watching them live.

My favorite part, besides the races, was seeing the Standardbreds leading out post parade. First, Foiled Again lead out post parade with ears perked straight up. He loves what he does and its very clear to see that. Then, the three competitors from the National Standardbred Horse Show. I think it was good to show fans that yes, these horses have a life after racing and are capable of doing anything – from dressage to show jumping to pleasure riding.

The scorching sun couldn’t keep the crowds away from another exciting Hambletonian Day last Saturday at Meadowlands Racetrack in New Jersey.

The day was kicked off by the Harness Horse Youth Foundation exhibition race, which is important on multiple fronts relating to the USTA Youth Delegates. Not only does it generate interest and excitement (especially from younger fans), but it also showcases a bright future for harness racing. It shows young people watching that there are ways to get involved in harness racing, even at a young age, and shows older viewers that the next generation of harness racing is passionate enough to ensure a vibrant future for the sport that brings us all together.

The sixteen-race card consisted of many exciting races, featuring some of the sport’s biggest stars, both two and four legged. Some of the most notable wins included Lather Up with an astonishing new record in the Sam McKee Memorial, Green Manalishi S and Greenshoe in their Hambletonian eliminations, When Dovescry in the Hambo Oaks, and Forbidden Trade pulling off the upset in the Hambletonian final.

Good quality racing with incredible equine athletes is what make harness racing fun. A chance to witness history and see a new world record is also another reason that days like Hambo day attract so many people.

I, along with another youth delegate, Jessica Hallett, helped the USTA social media crew by capturing pictures and videos of winning horses and posting them to different social media outlets. It is important to bring updates to fans that couldn’t make it and also give something for fans that were at the Big M on the big day something to share with friends to share the message, “I was there, harness racing is exciting”. I believe that social media can be a great tool in broadening the fanbase of our sport if done correctly. This is something that many of the youth delegates are adamant about, since young people are the ones being targeted through digital approaches.

Carnival rides and games, pony rides, face painting, and more activities for kids certainly kept families busy all day. It is important to make the racetrack a family friendly place, so people are more likely to come back. Today’s youth is tomorrow’s future for our sport, so it is crucial that we don’t leave them out of big days like Hambletonian Day. The Meadowlands did a good job of making a day at the races a family affair last weekend and I saw many young fans throughout the crowd. However, I hope to see even more next year.

Hambletonian day was once again one of my most exciting days of the year. It showcases the best in our sport and makes people eager to come back to the track again!

Previous: Night of Records in New England
Next: Tiny but Mighty

302 More posts in Fan Zone News category
Recommended for you