Driver Trace Tetrick got a new nickname fromMiami valley Raceway announcer Barry Vicroy as he renamed Trace “Touchdown Tetrick” when he scored his sixth win in the nightcap of the Tuesday (Jan. 24) matinee program.

Tag Up And Go (Tetrick) notched his first local score but it certainly wasn’t anything new to the well-traveled 7-year-old son of Angus Hall who now sports 29 career victories. In just his second try at Miami Valley, the Brewer Adams trainee was a convincing victor over Revenue Agent (Greg Grismore) and Insomniac (Brady Galliers) in the weekly $22,000 Open Trot. The 1:54.3 clocking was the quickest on the trotting gait in the 2-1/2 week old 2017 meet. 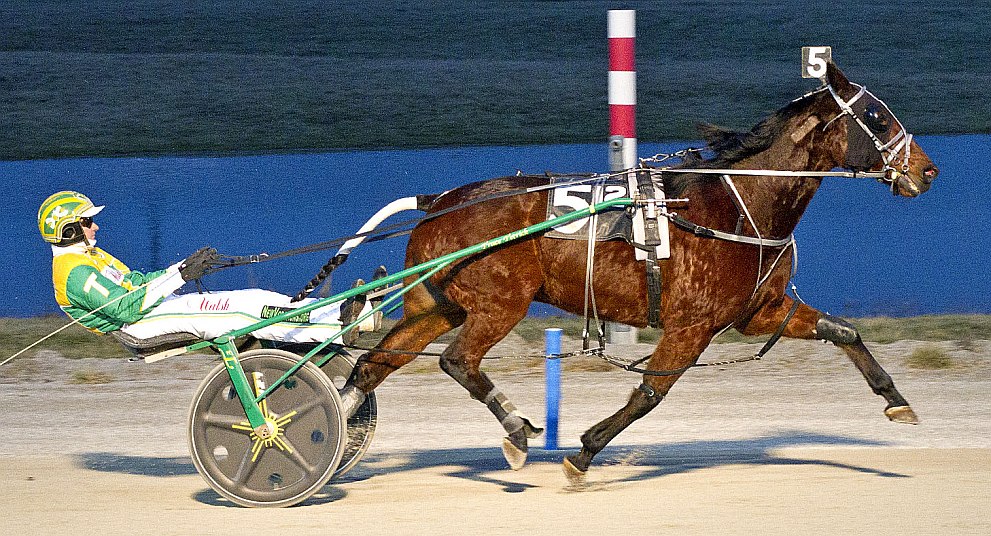 Trace Tetrick scored one of his six wins with Tag Up And Go in the Open Trot. Conrad photo.

Tetrick left the gate with authority and save for a brief “give and go” moment with Insomniac at the first quarter pole Tag Up And Go dictated all the fractions. The 6-5 favorite cut fractions of 27.4, 56.3 and 1:25.2 before sealing the deal with a 29.1 final panel. Revenue Agent seemed hopelessly boxed in around the final bend, but Grismore found a seam in mid-stretch and rallied sharply to grab the place money.

Four divisions of “Claim To Fame” series races were contested by $8,000 claiming pacers, plus a pair of splits for $12,500 filly and mare pacers.

The $8,000 group winners were Grantor Hanover (1:54.4, Jeremy Smith), Oyster Bay (1:55.3, Trace Tetrick), Dunside Art (1:54.3, Mike Oosting) and Turbo Mach (1:53.1, Trace Tetrick).  All four qualified for the $20,000 championship leg next Tuesday when they will be joined by Status Quo, Mike’s Hope, Peck Blue Chip and Ravenswood Reese in the lucrative final. The final spot in the championship leg will be the winner of a random draw between Perma Grin, Holy Chip and Untouchable One—all of whom tied for ninth in total earnings during the two preliminary legs.

Winners in the pair of splits for $12,500 mares were A Little Starstruk (1:55.2, Kayne Kauffman) and Sexy Card Shark (1:55.4, Trace Tetrick). The nine finalists who will chase a $17,900 pot next week are A Little Starstruk, Sexy CardShark, Transit Hanover, Ginger Tree Alexis, Caviart Scarlett, Cenalta Firecracker, Geisha Girl N, Ginger Spice N and either Rescue Team or Auf Wiedersehen, who tied for ninth.

Previous: Longtime partners are enjoying the ride with Panocchio
Next: Justin MacEachern named 2016 Caretaker of the Year
302 More posts in Fan Zone News category
Recommended for you