For Wanda Polisseni, it was a moment that left a permanent imprint on her soul.

The year was 2006. Polisseni had just ventured into the racing business. A group launching the Thoroughbred Adoption Center in Finger Lakes, N.Y., approached her for help, and she realized she didn’t know why such a facility was important.

“I thought when the babies got done racing they always go off to a beautiful life,” she said. “I didn’t do my homework when I started this.”

And the irrepressible Polisseni—who’s 80 going on 30—suddenly found a new cause.

In Wanda-speak, a baby is a horse. She refers to every one of the 100 head in her Purple Haze Stable as “my baby,” no matter what age, and has a special relationship with each.

“I love my horses,” she said. “I love it when I can set foot at the track by the barn and I walk in and hear them nickering. I want to be a part of their life.”

So Polisseni decided to start rescuing retired Standardbreds. She was initially going to invest in another facility, but—at the urging of friends who knew of her profound passion for horses—she decided to open her own.

After several years of exhaustive research and planning, and with the help of good friend Betty Holt and the executive board, the Purple Haze Standardbred Adoption Program opened in early June in Oxford, N.Y.

The mission statement on the website is simple: “The PHSAP is a 501(c)3 organization created to ensure that retired (New York) Standardbred horses find a second career.”

The center is hoping to provide internships for students at nearby SUNY Morrisville and SUNY Oneonta, along with an outreach program in which clinics and educational seminars will be provided.

Despite her lofty position and financial investment, Polisseni is quick to note, “It’s our program. It’s not going to be mine. I want it to be the board’s. I want them to feel ownership.”

The center will be funded by grants, donations and sponsorships, although it must operate between one and two years before it is eligible for grants. As usual, the charitable Polisseni has donated a considerable amount to prepare the facility. All outside contributions go toward the animals.

“One thing Wanda is very clear about and wants people aware of is that any money people donate or sponsor, is only used for horse care,” Holt said. “It’s not used for anything on the farm. She pays for all of that.”

Holt has been Polisseni’s invaluable aide from the start. The two met after Polisseni bought Smoky Bonz, a 2-year-old gelding Holt was involved with. Following his first win at Saratoga in 2004, Holt visited the winner’s circle to introduce herself and a friendship blossomed.

The two work together with the Harness Horse Breeders of New York State, which will be housed at the adoption center, and Holt was a no-brainer to help with this project.

“Betty is the absolute best,” Polisseni said. “She’s just been a great friend, never asking for anything in return. Way back when I first started talking about it, I knew she would be part of it.”

The two visited various farms in upstate New York in search of the right facility. When they arrived at the Oxford site, Polisseni knew she had found the perfect venue as she walked down the driveway. It was a former Thoroughbred showplace that required some cosmetic improvements and, most importantly, needed to expand from nine stalls to 20.

“I would like to have a few extra, in case a trainer or owner has a horse that needs a little time,” Polisseni said. “A lot of people don’t want to give those horses time.

“If we get the stalls, we can keep them separate and let them have the stall rest they need, as well as adoptions.”

Work began on the facility last December. At the outset of October, Holt said, “I think everything has moved along at a pretty good pace. It’s a work in progress. Wanda’s trying to do everything first class. We want to make sure we set it up so it will be there for a long time and that it’s self-sustaining. We’re also trying to re-use some things as far as some stuff left over from other projects. We don’t just recycle horses, we recycle everything on the farm.”

Other upgrades included more posts and fences, a new driveway and some landscaping. As Polisseni explained, “The facility hadn’t been used for a while and I wanted a showplace.”

There were 13 stalls filled at the beginning of autumn and Holt estimated all 20 could be full by the holidays.

To donate a horse for adoption, there is a strict vetting process. The donor must first fill out an application providing extensive information about the horse, and include a letter from a vet and any vaccination records.

A $300 payment is required to help cover the first month’s expenses, the horse’s back shoes must be pulled off and the horse must be delivered. The maximum age for donation is usually 15, unless there is a special case that the board will take into consideration.

Once a horse is donated, it will be evaluated for a certain amount of time.

“I don’t want a horse coming in and two days later someone takes it,” Holt said. “I want to make sure a horse is sound, it’s got a good attitude and it’s going to be a good fit.”

A similar process takes place when someone wants to adopt. They must also fill out an application for what they are looking for in terms of a particular horse, how they plan to use the horse and what experience they have. A reference from someone in the Standardbred industry or a veterinarian is required, along with photos of the applicant’s facility and the animals they currently own. To date, the facility has provided two horses with new homes.

“If there are any further questions, we would make a visit to their farm as well,” Holt said. “We’re not going to jump at anything. We want to make sure these are the right places for them.”

Much like Polisseni, Holt has a bond with horses. But she won’t draw comparisons between herself and her friend.

“They don’t make them any better than her,” Holt said. “Wanda is a very special person. I don’t think anyone I know of compares to Wanda. Obviously, I love the horses and I would love for people to take a Standardbred and use it for riding and find pleasure and joy in the fact these horses are war horses and then they go on and become very suitable family horses. But watching Wanda’s smile when she sees what she’s created here probably means as much to me as the horses do.”

Polisseni built a lucrative business with her late husband, Gene, and has used her fortune for good. The couple had to endure the passing of their daughter, Kim, who was killed at age 18 by a drunk driver in 1983. Kim hoped to be a police officer and in her honor her parents funded a law enforcement training center in Rochester, N.Y. Polisseni also named her stables after Kim, as her favorite color was purple and she was a huge fan of guitarist Jimi Hendrix, who wrote and performed the 1967 hit “Purple Haze.”

It would not be Polisseni’s only worthy cause. Her other children—Gary, Valerie and Greg—are also active charity workers. The family operates the Polisseni Foundation, which assists numerous organizations. Its mission statement is “Improving the quality of life in upstate New York,” and it has donated millions of dollars to countless worthy causes.

Polisseni sits on boards of hospitals, colleges and numerous goodwill groups, and assures that “I’ll never sign on to a board that I’m not going to work for.” In 2014, she was the subject of a cover story in Rochester Women magazine entitled “Small Town Farm Girl with a Big Heart.”

Her philanthropy does indeed trace back to her upbringing on a farm.

“My brother and I did all the work,” Polisseni said. “We boarded Standardbreds in the off-season. I know how tough life can be, but I will never complain. Other people have worse lives than that. But it’s made me who I am today and I feel so much compassion for those who can’t get to a local hospital or don’t have the things kids really need.”

Despite her early exposure to horses, Polisseni did not get involved in racing until three years after Gene passed away in 2001. She purchased six Standardbreds from a neighbor on New Year’s Eve, then purchased two Thoroughbreds and has been successfully involved with both breeds ever since.

Polisseni has received countless awards, but humility is one of her greatest traits. One night her horses won the first three races and when another won the fourth, she refused to go back to the winner’s circle.

Polisseni actually feels guilty about doing so well because she feels sympathy for other longtime trainers who struggle to make ends meet with just a few horses. When it was suggested her success might be karma for all the wonderful things she has done, she quickly responded, “But I don’t expect it. They’re not all gonna be stakes horses. If you think you’re gonna have stakes horses no matter what you pay, you better not be thinking about the business.”

Polisseni has employed some outstanding trainers and teamed up with Trond Smedshammer to form a dynamic duo over the last decade. Most of her purchases are done with only Smeds-
hammer’s aid.

“I want to sink or swim by myself,” Polisseni said. “I don’t want any partners telling my trainer what to do. I’ve got the best trainer there is; he trains my babies the way I want. I never have to worry about anything. But he always runs everything by me. It wasn’t until I had him that I had as much fun. I tell him, if he retires, then I’m done.”

It’s hard to imagine Polisseni ever being on the sidelines—especially with her latest project. If Polisseni has one point to get across to potential racehorse owners, it is to make sure they consider that horse when it’s done racing and find a good place for it.

As she begins her eighth decade on earth, Wanda’s days are fuller than a harvest moon and her wit is still sharp.

Which is why her quest for proper horse placement will remain in overdrive.

“I appreciate all the donations we have had, the help from my board of directors,” she said. “I’m beyond grateful for the people willing to help. The main thing is to make sure these horses and babies are protected at the very end of their racing career. I just wish I could do more, because there are many of these babies that need this.”

Do more? Horse lovers will tell Polisseni she is doing more than anyone could ever hope for. HB

Previous: Industry Trends: Bonanza in the Bluegrass
Next: Swift Success

256 More posts in Hoof Beats Magazine category
Recommended for you 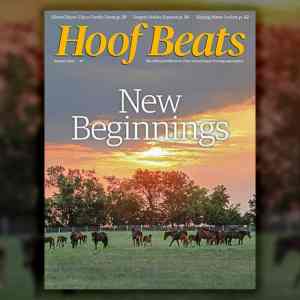