It’s one thing to stand out against many of the finest older pacers in training. It’s quite another to do it as a young’un.

Missile J, a relative toddler at the age of four, finds himself worthy of a seat at Saturday night’s (April 22) adult table for Yonkers Raceway’s $529,000 final of the George Morton Levy Memorial Pacing Series. This race, and its companion, the $310,600 Blue Chip Matchmaker, are the sport’s two richest of the season to date.

The Levy, of course, honors the memory of the Hall of Fame founder of Roosevelt Raceway.

Back to Missile J we go. The son of American Ideal, already with last season’s Art Rooney Pace, for then-owner Ken Jacobs and then-trainer Linda Toscano, here highlighting the resume, was the leader in the Levy clubhouse after winning his first three series starts. With his place in the final thus secured, he took the fourth week off before a ‘just don’t get hurt’ fifth-place effort in last Saturday’s (April 15) final prelim leg, winding up third in the standings. 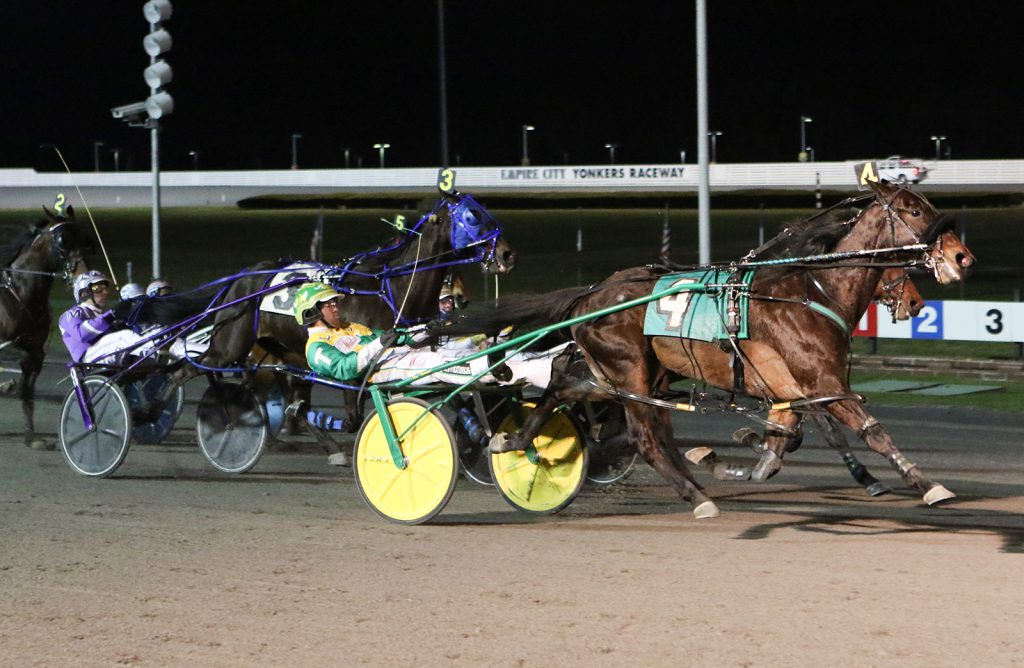 Missile J won three of the Levy prelims at Yonkers Raceway and ended up 3rd in the overall series standings. Mike Lizzi photo.

According to the U.S. Trotting Association’s Anne Chunko, just four of the previous 29 winners of this race have been 4-year-olds. Though Missile J won the Rooney flashing eight-hole speed, his success in the Levy has been the result of some eye-popping closes.

“He’s a bit of a hothead,” trainer Scott DiDomenico said. “Once you start him up, it’s hard to throttle him back down.”

DiDomenico took over training after the horse changed hands for $115,000 at the Meadowlands sale this past January.

This season’s early results, seven wins in nine starts, came on the hooves of a very poor end to 2016, when Missile J finished seventh in the final of the Empire Breeders (Tioga) and eighth (last) in the final of the New York Sire Stakes here at Yonkers Raceway.

“We, along with co-owners John McGill and Brian Carsey, just wanted a good Yonkers Saturday night horse,” DiDomenico said. “There was no thinking he’d be in the Levy.
“I knew he was a high-speed horse who could sprint and was raced hard. He seemed a bit tired at the end of last season, but the first few times we raced him this season at The Meadowlands, he was so good that we decided to take a shot and nominate him.”

“He wants to chase horses, but even he surprised me a couple of times,” DiDomenico—who added an open bridle to the horse’s wardrobe–said. “What that allowed us to do was given him a week (round four) off, and that was big. This is a grueling series, and not having to race every Saturday was a big plus. Also, having (Timmy) Tetrick each week has been great. The pair leave from post position three in the Levy.

I have one of the best drivers in the sport and I love the draw,” DiDomenico said. “There’s speed inside and outside and he (Tetrick) can just watch things unfold. Now, Missile J just has to execute.”

For all of Tetrick’s accomplishments, he has never won this race.

The 34-year-old DiDomenico, an Illinois expatriate who earlier this season earned his 1,000th career training victory, has enjoyed his greatest success with the $1.4 million pacing lass, Handsoffmycookie.

“Personally, it would be special to win this race, especially here (Yonkers). It’s where I’ve mainly raced the past number of years, and it’s where I always prefer to race,” he said.

Complete entries for the Saturday races at Yonkers can be found by clicking on this link.