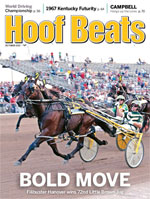 Click the cover to read a digital version of the October issue, absolutely FREE! Thank you for visiting the Harness Racing FanZone.

Profile: Grecale As
Good as He’s Ever Been: 14-year-old trotter shows no signs of slowing down
by Charlene Sharpe

Life After Racing
The Lost and Found Trail: Sometimes horseback is the best vantage point
by Charlotte Gelston

Shoeing News
Limb Support: A look at the equine structures supported by shoes
by Steve Stanley

Trot Lines
Stalling Is Significant: A professional consignor puts much thought into yearling stalls at sales
by Bob Marks

Previous: End Of An Era
Next: Feel The Rush
14 More posts in Hoof Beats Index category
Recommended for you 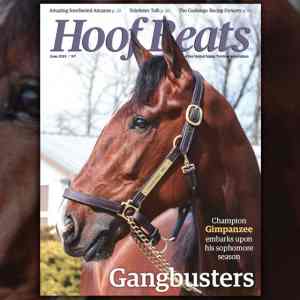 Features Pursuing Perfection Gimpanzee gears up for his sophomore campaign by Katie Navarra Tools of...