The sun may not have been shining, but many of the sport’s stars absolutely sparkled on a action-packed Saturday morning (April 22) at The Meadowlands, as seven Dan Patch Award winners demonstrated it is stakes season and they are prepared to pick up exactly where they left off prior to their winter vacations.

Shortly before this morning’s card commenced, future book Hambletonian favorite and world champion Walner made his presence known to his fans and fellow Dan Patch winners by stretching his legs around the East Rutherford oval with regular pilot Tim Tetrick at the lines. Conditioned by Linda Toscano and owned by Ken Jacobs, the son of Chapter Seven looked fit and pleased to be enjoying his exercise.

Although he did not capture a Dan Patch trophy as a 2-year-old, What The Hill, last year’s Peter Haughton Memorial victor, served notice his sophomore season may be even more rewarding for his connections as he out-finished Explosive Ridge by a neck, with Texican only a head behind, to capture his qualifying contest in 1:55.3. The son of Muscle Hill-K T Cha Cha, who appeared in the fourth race, is trained by Ron Burke and is owned by the same in conjunction with Our Horse Cents Stables, J&T Silva Stables and Deo Volente Farms.

Just two races later Hannelore Hanover cruised home to capture her qualifying race in 1:54 over fellow world champions and Dan Patch winners J L Cruze and Broadway Donna. The 5-year-old daughter of Swan For All-High Sobriety looked absolutely in hand for driver Yannick Gingras and is one of five qualifying winners for her trainer, Ron Burke, on this morning’s card. In fact, Gingras was effusive in discussing her after the mare, who is owned by her trainer, Weaver Bruscemi, Frank Baldachino and J&T Silva Stables, crossed the finish line.

“She was really, really good. I couldn’t be happier with her,” he said. “She’s been driving perfectly, two fingers, and had plenty of trot. She’s a lot sounder, perfectly gaited. Last year it would take her maybe a sixteenth of a mile to get going sometimes, but now she’s been perfect. I hope (it’s a big year). I’m looking forward to it, that’s for sure.”

Despite the victory by their rival, JL Cruze and Broadway Donna were not disgraced in a field that also included the very competitive 4-year-old mare Fad Finance and the 4-year-old Dupree, who is also stakes placed.

Race seven saw defending Breeders Crown champion Someomensomewhere follow her stablemate Somesleazetoplease around the track in an effort that would appear to move her forward. Now under the care of Hall of Famer Jimmy Takter after her recent purchase by Diamond Creek Racing and ABM Racing, the 3-year-old daughter of Somebeachsomewhere-Omen Hanover, was previously conditioned and owned by Nick Surick, as well as KDM Racing.

The eighth race went to That’s The Ticket rather than defending Dan Patch winner Idyllic Beach, who was second. Timed in 1:54.4 That’s The Ticket, with David Miller in the bike, also defeated that rival in last year’s Three Diamonds. Trained by Chris Ryder, the daughter of Roll With Joe-Art Account is owned by Craig Henderson, Robert Mondillo and Lawerence Minowitz.

Although Boogie Shuffle may not be a household name, he is one to bear watching as the son of Well Said-Ciela Hanover was second to Downbytheseaside in that colt’s world record equaling mile (1:49) at Red Mile. Trained by Mark Harder and guided by Scott Zeron, Boogie Shuffle flew home with a :26.4 final quarter panel. He competes as a homebred for Fox Hollow Farm.

World champion and Dan Patch Award winner Huntsville tallied an off the pace score in the 10th race. The son of Somebeachsomewhere-Wild West Show stopped the clock in 1:53.2 with a sizzling :26.2 final quarter-mile. Owned by this trainer Ray Schnittker, as well as Ted Gewertz, Charles Iannazzo and Steven Arnold, this colt is very physically imposing and strode out beautifully through the lane. He is preparing for a journey that will take him to the Keystone State and then to Canada.

“He went good,” Schnittker said. “There were no disasters, so that’s good. We put an open bridle on him and he got along pretty well with that, so I was very happy for his first start. I trained him last week out here and he was very good too. He’ll have another qualifier next week and then off to The Meadows (for the first leg of the Pennsylvania Sire Stakes on May 6). He goes to The Meadows, then Pocono and then the North America Cup.”

Dan Patch winner Boston Red Rocks illustrated his late season rush in 2016 has continued into the new year, with a very exciting photo finish triumph over the very talented Western Fame, who was second in last year’s Little Brown Jug and Pennsylvania Sire Stakes final. Lyons Snyder, who is also fleet of foot and stakes placed was right there in third, with the undefeated Maine champion, Seeley Man, in fourth.

Owned by Peter Blood and Rick Berks, Boston Red Rocks, used a blistering :26.4 final quarter-mile to get his nose on the line in front. The millionaire is conditioned by Steve Elliott.

The males may have put on their own show in the previous race, but the ladies offered an entertainment experience as well, in the morning’s final qualifying contest. Dual Dan Patch winner and world champion Pure Country and the extremely talented Darlinonthebeach, as well as the never to be dismissed Blue Moon Stride certainly lived up to expectations. Blue Moon Stride, trained by Mark Harder and owned by Emilio and Maria Rosati captured this affair, but this division is going to be captivating.

Pure County and Darlinonthebeach just could not quite reach their fellow contestant and Rock Me Baby, who was fourth, raced just as well. All four mares turned in sub :26.4 last fractions in their quest for the finish line. All their connections had to be very pleased with their efforts.

Brett Miller, who is Pure Country’s regular pilot and was in charge today, seconded that opinion and also lauded the final time of 1:51.4 at this time of the season.

“She was very good,” he said. “She went with an open bridle today and she’s always way more relaxed with the open bridle. When they put the cups on her, she knows it’s game time. So for her to go that fast and be that good with an open bridle, she feels good.”

from the USTA Communications Department 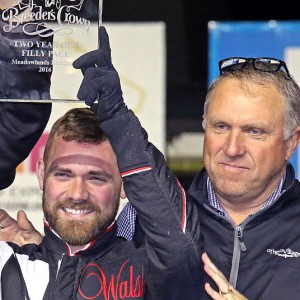 by Ken Weingartner Marcus Miller is going from Rising Star to Stars and Stripes. The...