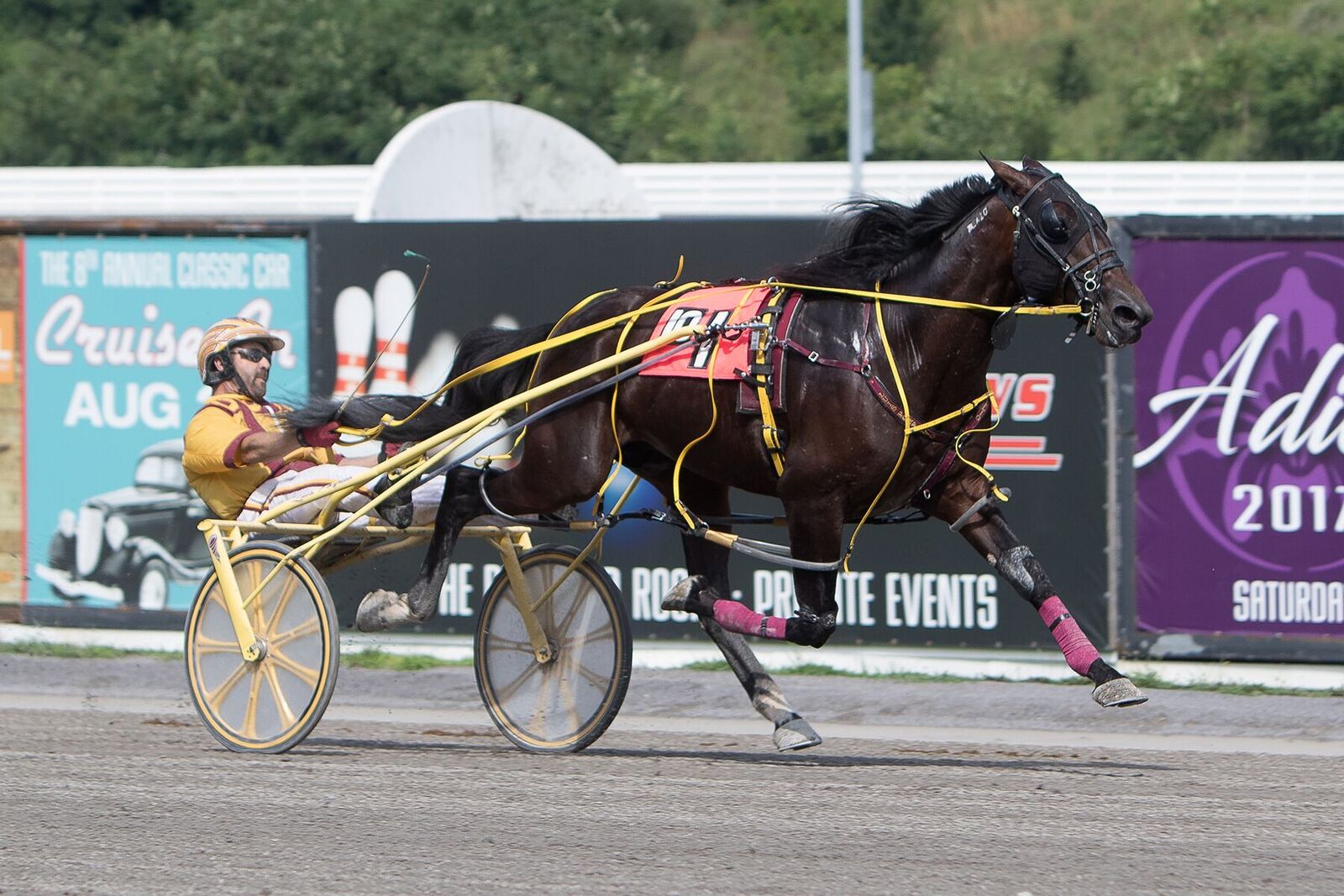 Luis Porfilio, co-owner and occasional driver of Churaco Art Surco, saw enough promise in the pacer during his racing career in Argentina that he purchased a piece of the horse and moved him to the U.S. this past spring. Photo by Chris Gooden.

As he competed in events for non-winners of two and three races lifetime this summer at The Meadows, Chucaro Art Surco might have looked to most like just another promising young pacer.

Which he is. In July, Chucaro Art Surco won two of three starts at the Pennsylvania track, taking a mark of 1:53.1 on July 29. While he certainly appears to have a strong future ahead of him, what some might not realize is that Chucaro Art Surco already has quite the reputation in Argentina.

Prior to his arrival in the U.S. in late March, Chucaro Art Surco won 20 of 24 lifetime starts in the South American country. Luis Porfilio, whose Heritage Stables LLC owns the horse with Leonardo Agusti and Claudio Bencardini, said the pacer was the country’s premier stakes horse.

“He was a very good horse there,” said Porfilio, who is himself a native of Argentina. “He won all the races very easily.”

It was after one of those impressive wins that Porfilio spoke to the pacer’s owners about bringing him to the U.S.

“Over there he doesn’t have much to race against,” Porfilio said.

And so Porfilio bought part of the pacer and imported him to the United States after a final 1:59 win south of the equator.  Chucaro Art Surco joined a fellow Argentinian, Albionkinginfinito, in the Porfilio Stable.

While it’s certainly not cheap to import a horse—Porfilio said $17,000 was spent getting Chucaro Art Surco to Pennsylvania—it is something Porfilio has done a handful of times since moving to the U.S. nearly two decades ago. Though he works primarily as a blacksmith, Porfilio and his wife, Angela, maintain a small stable of their own. He said that as a third-generation horseman in Argentina, he’d found plenty of success, but knew he’d have more earning potential in the U.S.

“I make more money here being nobody than being there and driving the best horses in the country,” he said.

Though the trip was the longest journey of Chucaro Art Surco’s life, Porfilio said the horse arrived in Pennsylvania in good condition. Because he made the move this spring, he didn’t have to adjust to a drastic temperature change. Porfilio said his other Argentine horse, Albionkinginfinito, hadn’t been so lucky. He came to Pennsylvania in January, when it’s summer in Argentina.

“He went from 95 degrees to 5 degrees,” Porfilio said. “He walked off the trailer and tried to turn around and get back on. He’s still having problems.”

Chucaro Art Surco had no such trouble getting acclimated. He did, however, become a year older when he came north. Because the Southern Hemisphere breeding season is opposite North America’s, Chucaro Art Surco was foaled Nov. 15, 2013. When he crossed the equator, he went from age 3 to age 4 just like that.

The pacer was deemed ready to race in June. With Porfilio in the bike, he won a qualifier at The Meadows June 2 in 1:54.2. In his first pari-mutuel start, however, the pacer was used hard to get to the front and tired, finishing ninth.

Two weeks later, he made a break and never caught the field. While Chucaro Art Surco again went offstride July 12, Porfilio was able to get him back pacing. Chucaro Art Surco made a first-over move and went on to win the race by more than three lengths in 1:54.3. He followed that up with a close second-place finish July 24 before his impressive 1:53.1 win on July 29. 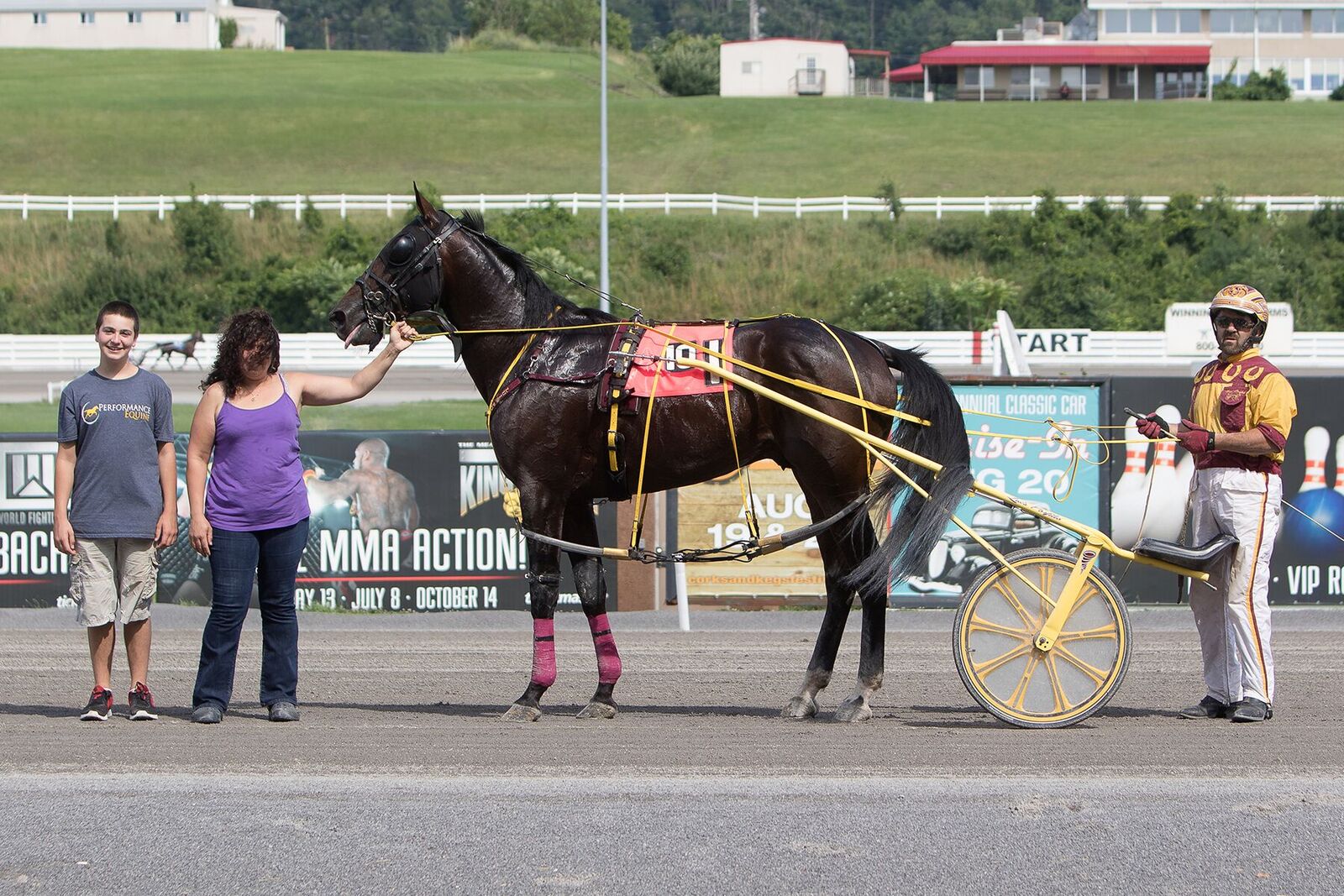 Chucaro Art Surco has won three of seven starts (as of Aug. 28) since coming to the U.S. Photo by Chris Gooden.

Porfilio believes the pacer will only continue to improve as he adjusts to the American style of racing. When asked about the difference between racing in Argentina and the U.S., Porfilio couldn’t help but laugh.

“Here it’s a different story,” he said. “They go so fast. Over there this horse raced against the best horses in the country and beat everybody. Here he races in non-winners of two.”

While driving strategy differs in Argentina as well—it’s not unusual to see horses three and four wide at the half—Porfilio said the biggest difference is in the quality of the animals themselves.

“Here you have the best horses in the world,” he said.

Nevertheless, Argentinian standouts who come to the U.S. do often find success, though it can take years. Porfilio referenced Chucaro Ahijuna, the Argentinian horse who in 2004 set the world record for double-gaited performers, winning in 1:51.4 on the pace and 1:53.3 on the trot.

Porfilio said he is pleased with Chucaro Art Surco’s performance so far and does not mind taking his time with the horse.

“I think next year he’s going to really be OK,” Porfilio said. “I think he’ll be a good horse.”

To see more from the September 2017 issue of Hoof Beats, click here.

Previous: Life After Racing
Next: The Statistical Edge
57 More posts in Headlines category
Recommended for you 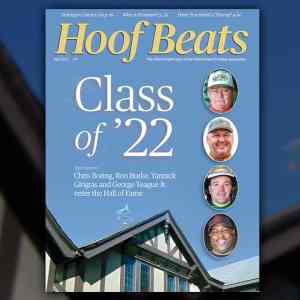