Andy McCarthy continues to process his good fortune in the sport

Andv McCarthy experienced the greatest thrill of his driving career in August when he won the Hambletonian in a record-tying time with the filly Ramona Hill. It actually took the Australian 13 years to surpass his previous highlight, which occurred in just his third American race.

And that highlight kickstarted a career that has been skyrocketing ever since.

The story has become one of legend, most likely because it involves a kid filling in for one. It was June 2007 and the hungry 21-year-old had all of two drives under his belt when the $46,500 Open Pace was held at The Meadowlands. Many of the sport’s best drivers were in Toronto that weekend for the North America Cup, leaving trainer Noel Daley looking to put someone behind Took Hanover in place of Hall of Famer John Campbell.

He turned to McCarthy, who had driven the same horse a week earlier. It was like putting in a fresh-faced rookie to pinch-hit for Babe Ruth in the ninth inning or replacing Tom Brady with a first-year quarterback to run the two-minute drill.

“Absolutely,” McCarthy said. “They were big shoes to fill right there.”

And the guy filling them was unknown to one of the co-owners.

“It was quite funny,” Daley said. “John Fielding’s comment was, ‘Who the hell is Andy McCarthy?’”

Fielding quickly got his answer as McCarthy drove Took Hanover to victory in 1:49.

“To this day, that’s one of my biggest thrills,” McCarthy said. “The Hambletonian topped it now, but the thrill I got racing that horse at The Meadowlands that night was amazing. It was the old Meadowlands where you come down the home stretch and you can see the skyline of New York City. I was just a young kid and I thought that was really neat. Just coming from where I came from, you never saw those kinds of miles. You cross the wire, you see 1:49 and New York City’s right there. That was a very big thrill.”

And it ignited a very big career for the affable Aussie, who increased his earnings every year from 2012-’19, with a career-high of $7,674,813 in 2019. The 34-year-old has won more than $50 million in career purse money as of late September this year, which he considers his finest season.

At the Hambletonian, McCarthy stopped the clock with Ramona Hill in 1:50.1, a record time she shares with her sire, Muscle Hill. McCarthy won four other races that day, including the $90,525 Shady Daisy with Reflect With Me and the $350,300 Jim Doherty Memorial with Darlene Hanover.

“I’ve had a good few years, but the Hambletonian is the bucket list race for sure,” McCarthy said. “I try not to get carried away too much with it. A few days after the Hambletonian it got a chance to sink in. But I’ve been pretty busy. You just have to keep moving and keep doing your job. I definitely feel my confidence level is at a peak right now because of that day. It was the highlight of my career.”

That career started Down Under. Born in Bathurst, Andy worked at his dad John’s successful Brisbane stable with older brother Luke (37) and younger brother Todd (27). Luke is a top driver in Australia who drove in America in 2009, and Todd recently came to the U.S. to stake his claim. Their sister Jodie, 36, is a physical therapist.

“She has the brains out of the family,” McCarthy said. “She went to university.”

He began driving at 16 and had solid success. Two weeks into his junior year, he quit high school and his dad insisted he learn a trade to have something to fall back on.

“I tried out plumbing,” McCarthy said. “I didn’t mind it, but I wanted to work with the horses, so I said, ‘Why don’t I learn how to shoe?’ You can always make a dollar shoeing horses; it doesn’t matter where you are in the world, really.”

He did all of the shoeing for his father, who had a stable of 40 to 50 horses.

“At the time, Noel Daley had an Australian guy and a Kiwi guy who were very good blacksmiths,” McCarthy said. “I’d just hang out with them and learn some stuff off them.”

Through them, he met Daley, who gave the youngster his first break.

“I went back to Australia and met the family and Andy was 20 then and expressed some interest in coming over,” Daley said. “He turned 21 and got his visa. He didn’t know what he planned on doing, so he worked for me for a while.”

Daley was the ultimate host when McCarthy arrived at his Bordentown, N.J., stable, giving him a job, a place to stay, and a car to drive. His house guest arrived with simple goals.

“I actually came over to be a better blacksmith,” McCarthy said. “But I did want to win one race. I wanted to have a picture to take home and hang on the wall. I didn’t think I’d ever make it as a driver here.”

That thought changed after he won that one race, which occurred at the sport’s biggest venue while he was filling in for one of its biggest names.

“That kind of got the snowball rolling,” McCarthy said. “At that time, you looked at the driver colony at The Meadowlands—there wasn’t room for a guy like me, a 21-year-old kid. I knew it wasn’t going to happen overnight. But after I won that race, I definitely got bit by the bug. I’d done a lot of driving Down Under, but still, this was the pinnacle of harness racing, especially The Meadowlands.”

McCarthy paid his dues, often driving to The Downs at Mohegan Sun Pocono just to drive one horse in an overnight. He won 11 races and $243,446 his first year, and life as a blacksmith became an afterthought. He quickly learned to adapt to the less aggressive style of racing that was prevalent in his native land.

“You could move people out of the way, stuff like that,” McCarthy said. “We would race really tight and the horses were pretty much right next to each other because the race bikes were so much more narrow.

“It’s a little safer and roomier over here. You’re driving against the same guys at almost every racetrack. Everyone is kind of looking out for each other a little. If you got a horse and you’re having a little trouble with it, you let two or three guys behind you know about it so they can keep an eye on you. You don’t want to get run over and you don’t want to run over anyone else.”

Other trainers began to notice McCarthy’s ability—most notably Tony Alagna—and McCarthy began receiving better horses to drive. He has not disappointed, having won more than 200 races for six straight years entering 2020, including a career-high 290 in 2018.

In 2019, he became the eighth driver in history to win at least four Breeders Crown finals in a season and was the first to do so without driving a favorite.

His success is a tribute to his countryman’s eye for talent.

“I don’t mind giving a guy a chance,” Daley said. “I knew he could drive. I’d seen him drive at home. Even at that age, he’d done quite well. His father gave him chances and he’d won some of the bigger races.

“Obviously, they gain their experience along the way. But you get a gauge pretty quick whether someone has it or they haven’t. It’s a matter of which way they go with experience. Some get better and some don’t. The horses ran for him.”

In 2009, McCarthy enjoyed an eventful year for several reasons. He hit triple figures in wins (219) for the first time and met his future wife, Katrina, who was a bookkeeper at Harrah’s Philadelphia Casino and Racetrack. The two were married in 2013 and have two boys born two years apart on March 29. Finn is 6 and Olly 4.

They own 2½ acres, complete with a chicken coop, in Swedesboro, a southern New Jersey suburb across the river from Harrah’s. McCarthy is also a regular at The Meadowlands and Pocono and has enjoyed an increasing number of drives on the Grand Circuit.

Being in demand keeps him away from home for stretches. But coming from a close-knit family that he still visits often, McCarthy’s top priority is being a good husband and father. Katrina works in the geography department at nearby Rowan University and sets her own hours, which allows her to watch the boys when her husband is away.

“She’s busier than I am; I know that,” he said. “It’s tough during the season. I can hang out with them during the day and drive at night. I try to make as much time as possible in the winter. We usually travel, go back to Australia, or somewhere.”

Traveling is in McCarthy’s blood. Prior to their children being born, he and Katrina took a three-month vacation to South America one winter, going to Peru, Ecuador, Columbia, Guatemala, and Belize. They recently took the boys to Hawaii, Australia, Belgium, France and Sri Lanka.

“I think a lot of people from Down Under like to travel,” McCarthy said. “We’re a little isolated down there, a long way away from anything, so it’s nice to see the rest of the world.”

He said the boys are of an age where they can start to enjoy some of the sites they see. Finn and, to a lesser extent, Olly also appreciate what Dad does for a living.

“My oldest is a die-hard fan; he knows all the drivers,” McCarthy said. “Finn loves the game. Olly’s just starting to get into it now. Earlier on, it was more about tractors and planes and trains and anything mechanical. But he’s really starting to get into the horse racing now.”

And while it’s too early to start thinking about what they will do later in life, McCarthy has no qualms if his sons follow their old man into harness racing.

“Whatever they want to do, they’ll do,” he said. “I’m not going to steer them in any way. Hopefully, the game’s going good enough that when it comes time to make a decision, that could be an option. I love this game. Me and my family have had a lot of success in it and you meet so many good people. I definitely wouldn’t steer them away from it. I just might go down the route that my dad took with me and tell them to have something to fall back on.”

Talking to McCarthy, it’s easy to see that life is good, both on and off the track. And he points to one man as the main reason.

“I owe every bit of success I’ve had to Noel Daley,” Andy said. “He gave me a shot. There were enough good drivers around he didn’t need to use me. But he stuck by me and we’ve had a lot of success together. He gave me a room, gave me a car when I got here, and sent me on my way.

“I’m just in a very fortunate situation right now. I couldn’t be luckier.” 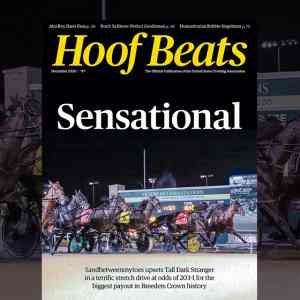