Is there a reason horses are going so much faster now than in the past?

Nancy Takter remembers vividly the day she watched Tom Ridge become the fastest trotter in history with a 1:50.2 win in the 2004 World Trotting Derby at the Du Quoin State Fair in Illinois. Takter was the 23-year-old caretaker of the colt, trained by her father, Jimmy, who at the time called Tom Ridge’s performance “amazing.”

Fifteen years later, Takter watched as Manchego became the fastest female trotter in history with a 1:49 victory in the 2019 Allerage Mare Trot at Lexington’s Red Mile. No longer a groom, Takter now had Manchego in her own training stable. The 4-year-old mare’s performance, like Tom Ridge’s effort, certainly could have been called amazing.

But for Takter, it also was something else—a moment of fulfillment in a new era of speed for the trotter.

Prior to her world-record win in Lexington, Manchego twice broke the 1:50 mark, but in losing efforts, missing by a nose in 1:49.4 at age 3 and finishing fourth with a time of 1:49.2 at age 4. Her fastest wins had put Manchego tantalizingly close to establishing her own mark in the 1:49s, with two triumphs in 1:50 and another two in 1:50.1, one of those a win by nine lengths at Hollywood Gaming Dayton Raceway in the start prior to her 1:49 score.

“When she won at Dayton, I looked at the timer and I was like, ‘Seriously?’ She was so under wraps that day. But then she came back and trotted [1]:49 flat. It was great. She’s an amazing horse.”

Manchego will be one of the horses to watch again this year as a trotting speed revolution looks to continue into a new decade.

At the end of the 20th century, the fastest trotting mile in history was 1:51, set by Pine Chip in a time trial at Lexington’s Red Mile in 1994. The clocking eclipsed Beat The Wheel’s mark of 1:51.4 established earlier in the year at The Meadowlands.

When the second decade of the 21st century came to an end last year, the fastest mile belonged to Homicide Hunter, thanks to his 1:48.4 triumph at Red Mile in 2018. Three other trotters joined Homicide Hunter in the sub-1:50 win club that season.

That club got its first member in 2008, when Enough Talk won in 1:49.3 at Colonial Downs to lower the trotting speed standard from 1:50.1, set by both Donato Hanover and Giant Diablo on the same card at Red Mile on Oct. 6, 2007. From then through 2017, three additional trotters won in less than 1:50, topped by Sebastian K’s then-world-record 1:49 at The Downs at Mohegan Sun Pocono in 2014. After that, the floodgates seemed to open. During the final two years of the past decade, eight trotters broke the 1:50-win barrier, with seven more winning in 1:50.1 or faster.

“I think once it happens, then the drivers feel more confident that it can happen again,” said Ron Burke, who has trained three sub-1:50 trotters in Atlanta, Hannelore Hanover and Impinktoo. “They give horses chances by getting to the half[-mile] faster. Why our sport has gotten faster and faster—with the advent of catch drivers—is, as they’ve realized horses can go faster, they’ve asked them to go faster.

“There will be more horses that can do it. Now when you get to the half in :53 in a trot race, you don’t think you’re an idiot. Years ago, they would have thought you were insane, and tell you no horse could trot that fast. They’re finding out, yeah, the great ones can, and you find the true bottom of these horses. But if you don’t give it a shot, if you’re not aiming for [1]:49, how do you ever become [1]:49?”

And as illustrated by Manchego, a fast mile does not have to be a one-off performance. Six Pack, who retired at the end of his 4-year-old campaign in 2019, became the first trotter with sub-1:50 wins in two different seasons, going 1:49.1 at age 3 and 1:49.2 at age 4. He enjoyed an unprecedented four victories in 1:50 or faster.

“The horses are conditioned for it,” said Yannick Gingras, who drove each of Burke’s three sub-1:50 winners. “The trainers know what they’re doing. If the horses weren’t ready for it, they could do it maybe once. They have the best trainers in the world taking care of them. They didn’t show up here by mistake, they showed up here because they were ready. These trainers have prepared these horses for months to get to this point. That’s the reason they can handle it and can sustain it. All the credit goes to them for making it happen.”

Ake Svanstedt trained and drove Six Pack, as well as three other sub-1:50 trotters, including Sebastian K. No one has trained or driven more horses with marks faster than 1:50. He pointed to breeding being a key factor.

“I don’t know if I’m surprised, but there are a lot of horses that can go [1]:49,” Svanstedt said. “I think they can go faster in the future. They’re born to trot now. Years ago, you must balance them to make them trot. Now they’re natural trotters.”

Brian Sears, who was in the sulky for Homicide Hunter’s 1:48.4 win, agreed.

“I just think the gait has become so natural, so flawless,” Sears said. “It used to be that you had to rig them up and make sure they’re not touching anywhere, and these horses are getting to be like pacers. As soon as you throw a harness on them, they’re trotting and doing it in good-gaited fashion.

“A great gaited trotter, there’s nothing better than that. I always said about [2009 Horse of the Year] Muscle Hill that he was so efficient behind that he almost went like a pacer; there was no wasted action. That seems to me where he got most of his speed. I think you see that in some [of his progeny].”

Of the 11 fastest 3-year-old trotters in history, only Muscle Hill and 2007 Horse of the Year Donato Hanover competed prior to 2018. Muscle Hill’s offspring include three of the remaining nine—Manchego, When Dovescry and Beautiful Sin—as well as former Burke star Mission Brief, whose 1:50.3 win in 2014 remains the fastest mile ever by a 2-year-old.

“But never in my mind did I not think Mission Brief could trot [1]:48 flat. She had a different gait; it was a little more powerful. Some of it is Muscle Hill’s breeding changing the game.

“Muscle Hill, he went in [1]:50.1 and was under wraps, and at that point right there, he could have gone in [1]:49. I think maybe his progeny is going to be where you see it get to [1]:48. And it looks like [stallion] Chapter Seven now might be the other one. You’ve seen horses like Walner, Atlanta—extreme speed.”

Manchego, like Mission Brief before her, also has a special gait, according to Takter.

“It’s hard to explain unless you’ve ever sat behind her, but she has a gait unlike any other horse I’ve sat behind,” Takter said. “It’s almost like she’s on springs; she has this bounce to her. She literally springs forward. Where does it come from? Is it how she’s built? She’s the only one I’ve ever felt that in. It’s like she’s a rubber ball and bounces forward. She’s very light on her feet. It’s very unique.”

Manchego and Atlanta—who, prior to Manchego, held the trotting record for a female at 1:49.1—appear to be the most likely horses to challenge 1:48 this year.

“I could see Atlanta coming back this year and trotting in the [1]:48s,” Burke said. “Obviously, Manchego. They are high-speed horses that can carry their speed for a long time. Nobody else to me has shown that high, high ability. To me, coming back, those are the two. They’re going to be [age] 5 and this is usually the year, or the next two years, when a horse is going to find the true top of their game.

Regardless of the results of their performances, trotting speed will continue to evolve and change the sport.

Ken Weingartner is the USTA media relations manager. To comment on this story, email us at readerforum@ustrotting.com.

Previous: Industry Trends: Summing It Up
Next: Hoof Beats February 2020

163 More posts in Hoof Beats Magazine category
Recommended for you 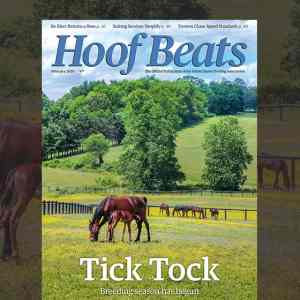