Tall Dark Stranger provides a fairytale season for his connections

Judy Chaffee happily refers to Tall Dark Stranger’s rookie season, which culminated with the Dan Patch 2-Year-Old Colt Pacer of the Year Award, as a “fairytale.”

That being the case, consider it a sequel for the Chaffees’ Caviart Farms stable. Her husband, Buck, also described Captain Crunch, their 2018 winner of the same award, as living out a fairytale campaign.

The cast of principal players in this latest tale is altered slightly. It includes Jim Avritt Sr. as the author, the ownership group as the publishers, Nancy Takter in her recurring role as the fairy godmother, the horse himself as Prince Charming, and Yannick Gingras as the faithful comrade who helps our hero take on all challengers.

It could be entitled “A Stranger Wears the Crown” after the horse claimed the Breeders Crown.

Talk Dark Stranger was bred by Avritt’s small but successful Kentucky operation and purchased at the 2018 Lexington Selected Yearling Sale for a whopping $330,000 by Caviart Farms, Crawford Farms Racing, Marvin Katz and Howard Taylor. With Takter training (she also trained Captain Crunch) and Gingras driving, Tall Dark Stranger was so good as a freshman that he enters the 2020 season as one of harness racing’s top 3-year-old pacing colts and will obviously be heavily staked.

He is coming off a campaign that included victories in eight of nine starts and $717,514 in earnings. He also established a stakes record while winning the $562,500 Metro Pace, harness racing’s richest race for 2-year-olds.

Those successes culminated in the Dan Patch Award.

It was like enjoying a season-long visit to Fantasy Land, according to Chaffee.

“When Buck and I became owners in Tall Dark Stranger, it was the beginning of an adventure that, at least in his freshman year, was as happy as any fairytale,” Chaffee said.

The only encounter with an evil queen came in the Breeders Crown elimination when a bout of sickness led to a second-place finish. The illness persisted through the final, but Tall Dark Stranger managed to gut out a victory that was tinged by controversy (more on that later). The horse enters this year with no such health issues.

“He’s phenomenal,” Takter said in early February. “He could not be coming back any better. I’m super happy with how he’s coming back. He grew up a bit, filled out a bit. He’s just happy to be back at work.”

And Takter is happy to have him, as Tall Dark Stranger immediately caught her attention as well as that of her Hall of Fame father, Jimmy. The son of Bettor’s Delight out of Avritt’s homebred Dan Patch winner Precocious Beauty, Talk Dark Stranger continues to give the breeder a strong crop of quality out of a moderate pool of quantity.

“My dad was with me inspecting yearlings prior to the sale,” Takter said. “He was gorgeous, he was beautiful, he has the pedigree page to match his conformation and his looks. We both obviously fell in love with him.”

She added with a laugh, “Obviously there were a lot of people that fell in love with him, because we had to pay $330,000 to bring him home.”

At the same time, the Chaffees were in Lexington looking for a well-bred filly to race and eventually make a broodmare. As Judy poured over the catalog, she could not help but notice the addition of a lone colt.

“There was no thought of buying him,” she said. “But based on his impressive breeding and video, I just wanted to see him—to see what he looked like.”

The colt was Tall Dark Stranger.

And the first impression?

“What we saw is etched into my memory forever,” Chaffee said. “He had a regal air about him (Prince Charming usually does); he looked so strong and well put together. Even now I remember turning to Buck and saying, ‘Is there such a thing as a horse being too perfect?’ In my mind, he was perfect.”

And yet, perfection was not on the shopping list—at least until later that day when Takter called. As they discussed fillies, idle chatter came around to the perfect colt.

“As quickly as Nancy asked his hip number and I responded ‘60,’ Nancy asked, ‘How much of him do you want?’” Chaffee said. “She later mentioned that her dad had given the colt his best mark and said that only one horse at the sale ever gets that very highest rating.”

When the Chaffees decided to go for it, Takter quickly assembled the ownership group to divide the steep price into quarters.

“Plus, Buck and I have found that it is great fun to share rooting for a horse with partners; and partners in turn become good friends,” Chaffee said.

In this case, they all became successful friends as reports from Takter Farms in East Windsor, N.J., were positive before Tall Dark Stranger ever raced.

“He was just a really good individual, right from the get-go,” Takter said.

Tall Dark Stranger wasted little time making an impact, winning his debut at The Meadowlands, followed by a victory in the second leg of the Dream Maker Series in 1:51.1 at Woodbine Mohawk Park.

On Sep. 21, he applied the stamp of greatness by winning the $562,500 Metro Pace in 1:49.1, also at Woodbine Mohawk Park. The colt took a fifth of a second off the stakes mark set by Sportswriter in 2009 and equaled A Rocknroll Dance’s 2011 track record. After Capt Midnight took the lead, Tall Dark Stranger roared past him to give Gingras and Takter each their first Metro victory.

“That was the most phenomenal moment of the season for me,” Chaffee said. “Yannick said in the winner’s circle he did all that without even asking him. He did it all with his ear plugs still in. Once again, he showed he had that great combination of phenomenal speed, determination and a love for winning.”

Like all great horses, it is a quality that defines Tall Dark Stranger.

“He’s really versatile; he’s really honest,” Takter said. “If he’s on the front he’s going to do what he needs to stay there, and if he races off cover he’ll do what he needs to pass horses in front of him. He’s kind of figured out what he’s supposed to do, which the great horses do. They know they’re supposed to win. They’re able to relax in a race; that’s what makes them great. They know when it’s time to go, it’s time to go.”

The season’s lone blemish came in the Breeders Crown elimination, with a second-place finish to Papi Rob Hanover. Tall Dark Stranger was struggling with a throat issue Takter addressed but was still not 100 percent heading into the final.

In the Breeders Crown final, it appeared Papi Rob Hanover would gain the measure of Tall Dark Stranger again when he crossed the line first by a head. Gingras placed an objection against David Miller, saying that his horse was bumped. Following a lengthy deliberation, the judges concurred, and Tall Dark Stranger was awarded the triumph.

When it was finally decided, emotions were mixed.

“Buck and I spoke with Yannick in the winner’s circle,” Chaffee said. “He said that the other colt veering over really did make the difference, and that he knew Stranger was going to win. He also pointed out that he had not lodged an objection since 2002 and said he never would have done it this time except that he knew that his colt was fighting back and going to win—he didn’t doubt it.”

Nor did Chaffee after watching the replay, but that could not remove a tinge of disappointment.

“There is a sadness to the fact that there will always be questions about which colt would have crossed the finish line first if that colt had not veered in,” she said. “There are those who think that Papi Rob Hanover was robbed. But there is always the fact that if Yannick is correct and Tall Dark Stranger would have clearly won the Breeders Crown, you have to say that Tall Dark Stranger actually both won and lost. Yes, he was awarded the Breeders Crown win, but forever and always that veering in leaves him with a record that reads ‘second placed first.’”

Takter also wishes the controversy never occurred, but feels the judges got it right.

“Obviously, it’s not the ideal way to win the Breeders Crown, but I do, a hundred-million percent in my heart, believe that my horse was coming back,” she said. “My horse wears a blind bridle and he can’t see Papi Rob until Papi Rob gets by him. Once he sees that, he digs in again and he’s going to go by, but he gets bumped at that point and if you watch the replay, he loses the race by a head and the bump was quite significant. So, that was the difference.

“Obviously, I wish the bump never happened, because then he would have beat him outright and there would have never been a discussion about it.”

Either way, any discussion about Tall Dark Stranger’s debut season is laced with superlatives. He not only won races, but made life easier for his trainer.

“He’s such a pleasure to be around,” Takter said. “He’s got such a good head on his shoulders; he does everything right. Horses usually end up messing up a trainer’s schedule somehow. Gratefully he stuck to my plan. He did everything he was supposed to do.”

As did the driver.

“Yannick and he have gotten along really good since the first baby race,” Takter said. “Yannick respects my plan, too, which makes me happy. I wanted to race him off the pace at the beginning of the season just to build confidence. It’s not always an easy task to have your driver and your horse listen to you, but I managed to get that done.”

Takter shut Tall Dark Stranger down after the Breeders Crown to get him fully healthy for this year, feeling there really wasn’t much more to prove.

Chaffee felt her horse proved himself time and again, living up to the lofty expectations she and Buck had.

“Tall Dark Stranger had exactly the kind of year that we not only hoped for, but to some degree even expected,” she said. “It seems a bit strange to say such a thing, but from the very first moment that we saw him as a yearling, we couldn’t help but believe in him.”

Their belief was rewarded, but it’s too early to say they live happily ever after in this fairy tale.

After all, this year brings a whole new set of challenges, and Takter looks forward to them.

“I don’t think we’ve seen anywhere near his bottom,” she said. “In the Breeders Crown he was not healthy and was still able to perform at such a high level. He’s just an outstanding animal. He can carry his speed for a long time. He’s got quick speed, so it’s kind of like a double threat.

“Obviously, we’re all looking forward to his 3-year-old season. But he needs to be healthy. Things kind of have to go your way. You need to draw well once in a while and you want to get off on a good start to the year. I guess the first big dance on the schedule is the North America Cup.”

What happens there remains to be seen. But as any fairytale fan knows, things usually work out well for Prince Charming at a big dance.

Previous: Rambling Man
Next: Lady Is a Champ
207 More posts in Hoof Beats Magazine category
Recommended for you 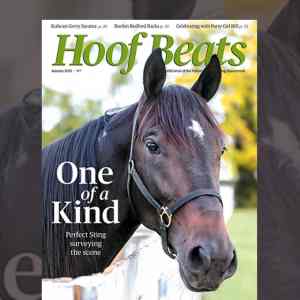 Features Simply the Best Perfect Sting is the only undefeated freshman male pacer to win...