It did not take long for Jimmy Takter to fall in love with Pasithea Face.

“It was the first time I trained her,” Takter said about the 5-year-old Swedish-born mare, who arrived in his stable on June 19 and two months later trotted one of the fastest miles in history by a female trotter. “She came here and she looked fantastic and she adapted very easily to my way of training.

“I drove her in her first qualifier and I thought, wow, what a nice filly. She is a fantastic horse.”

Pasithea Face has won two of four races since arriving in North America, including a 1:50.4 triumph in a division of the Miss Versatility Series on Aug. 20 at Tioga Downs. At the time, it was the sixth-fastest winning mile by a trotting mare in history and only three-fifths of a second off Giant Diablo’s world record. 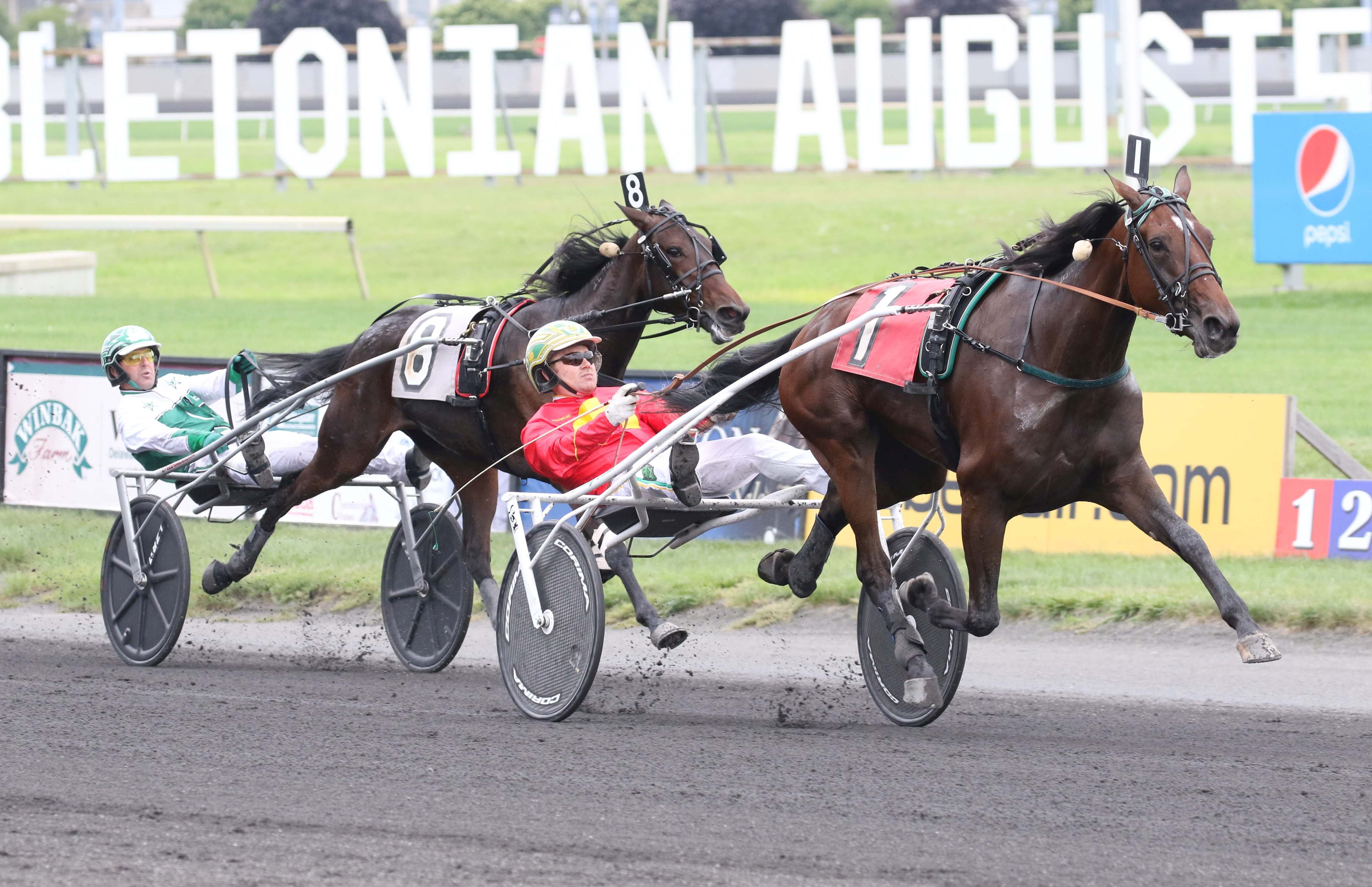 On Friday, Pasithea Face will compete in the first of two eliminations of the Maple Leaf Trot at Mohawk Racetrack in Ontario. It will be her first try against male rivals since arriving from Europe, although the 5-2 morning-line favorite in her race is another mare, Hannelore Hanover. She finished second in last year’s Maple Leaf Trot.

Pasithea Face is the 7-2 third choice and will have Tim Tetrick in the sulky.

The favorite in the second elimination is defending champion Resolve, who is 9-5 on the morning line. The top-five finishers from each C$40,000 elimination return Sept. 16 for the C$593,000 final.

Pasithea Face, owned by Courant Inc. and trained previously by Lutfi Kolgjini, is a daughter of 2009 Horse of the Year Muscle Hill out of the French mare Jovelinotte. Courant Inc.’s Anders Strom found Pasithea Face as a yearling while looking at several other horses.

“I was in the paddock to see some yearling fillies by Muscle Hill that I was interested in on the recommendation of Thomas Moberg, primarily Princess Face and Pandora Face,” Strom said via email. “One more horse caught my eyes and that was Pasithea Face, so I basically told Kolgjini I wanted to buy her in the package as well.

“It was her fantastic conformation and Muscle Hill on a brilliant French maternal line that attracted me most. I already owned her big brother Opitergium (by Pine Chip) at the time, a really strong horse that did well in Group races. I now also own a half-sister, Lovelinotte (by Toss Out), who is a broodmare with Am Bloodstock (our breeding operation). She has already started to produce nice young horses.”

Pasithea Face enjoyed a strong career in Europe, winning nine of 31 starts and earning $301,199, but Strom and Kolgjini thought the mare’s racing style might be better suited for North America.

“Lutfi and I discussed this at length and decided the mile tracks in the U.S. would be ideal for her, and also that she might be a good mare to breed in Kentucky for the future,” said Strom, who can be followed on Twitter at @Courant_AB. “A broodmare that could show 1:50 capacity with some French outcross will obviously yield attractive offspring for the U.S. yearling market in the future.”

Pasithea Face finished second in her U.S. debut, but found the winner’s circle on her second try, capturing the Dr. John R. Steele Memorial on Hambletonian Day (Aug. 5) at the Meadowlands in 1:51.2. Next was her 1:50.4 victory at Tioga, where a week later she finished fourth in Emoticon Hanover’s 1:50.2 mile in the Joie De Vie Stakes.

Takter expects the ladies to give the gentlemen a battle in the Maple Leaf Trot.

“I think both Hannelore and Pasithea are competitive with those horses,” Takter said. “We’ll see; maybe I’m wrong. I’m not going to say (Pasithea Face) is going to go out and win, but I think she will be good.

“She’s a sweetheart. Kolgjini did a good job developing her. He always has his horses looking great. A horse like that makes me look good. I don’t take much credit. But I’m the babysitter and I make sure she’s happy.”

Pasithea Face’s future will be determined by how she handles the remainder of the campaign.

“We will race her the rest of the season and then listen to the horse; if she is sound, we might do another year of racing,” Strom said. “There is even an option to try the big races in France with her if Jimmy Takter thinks she can do it. He should know having had Moni Maker racing the long-distance races in Paris before.”

For now, Strom is simply happy to watch Pasithea Face compete in her new environment.

“She seems to enjoy racing the way races are run in the U.S.,” Strom said. “Besides that, she goes along well with Tim Tetrick. I do as well. I really enjoy seeing Timmy driving my best horses over there. He is a class act.”

Following are the fields in post order for the two Maple Leaf Trot eliminations, with drivers, trainers and morning line.