Novice driver learns after mishap with a cart and a stone

Standardbreds are consistently showing their versatility, whether it’s riding or driving, for show or for pleasure. Hoof Beats is happy to share stores from readers about their favorite Standardbreds. This month, Charlotte Gelston writes about Notorius Bluestone, now named “Blue” and under the care of Terry and Charlie Dickinson. 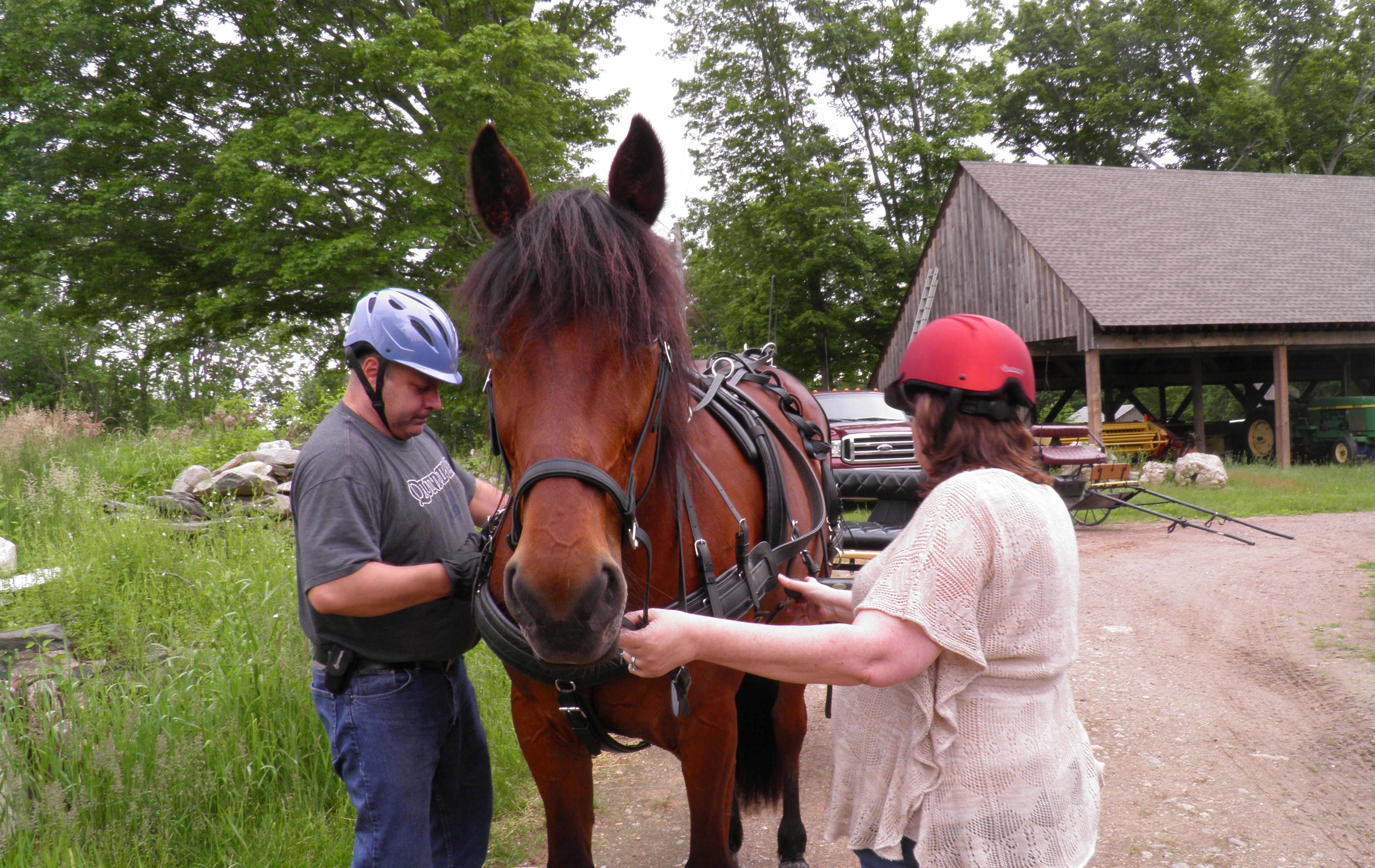 ALL SET: Charlie Dickinson and his wife, Terry, get Blue ready for an outing. Photos by the author.

As we departed by the lower route near the back pasture, I pointed out a particularly treacherous triangular-shaped rock that lay in wait just as we passed through the opening in the stone wall.

“Remember to swing wide as you take this corner, or else you will hit this big stone,” I warned him. “On the way back, it is even more dangerous. It forms a “ramp” which will bring your left wheel up high enough to flip the cart right over.”

“Duly noted,” said Charlie with a nod of his head.

As we drove down the rough old road, I told Charlie, “On a road like this, you are bound to hit a few rocks, stumps or roots in the path. It‘s impossible to go around all of them.  Just try to avoid the largest ones which will cause the most jolting on us and wear on your cart.”

Charlie was carefully trying to miss the worst of the embedded stones along the route, but it isn’t easy. We bounced a few times as we encountered some he couldn’t avoid.

Blue seemed to concur with his opinion. He carried his head alertly, ears pricked forward, and didn’t stumble once the entire way. As we made our way out of the woods and onto the smooth dirt road, he eagerly increased his trotting speed when asked to “trot on.” We flew up the dirt road, letting Blue have his head.

Curious as to how fast Blue could travel, Charlie had brought along his GPS unit.  Blue continued lengthening his stride, pulling two adults and a rugged trail cart weighing 150 lbs.  Even with all the extra weight compared to his racing days, Blue effortlessly hit 29 mph!

“Wow, what a thrill,” said Charlie as he slowed Blue to a walk. “He’s really fast!”

“He sure is,” I said. “But best of all, he never thought about breaking his huge trot. He’s very well-trained.”

We continued driving another mile or two, making a loop back to where we had exited the woods. Charlie was doing a good job choosing his path. When the left wheel next to me narrowly missed a particularly big stone, I had to ask, “Did you steer around that one on purpose, or did you just get lucky?”

“I saw it coming and steered Blue a little more to the left, hoping to avoid it,” Charlie replied with a smile, “and we did!”

He was quite pleased with his performance, and rightly so.

Not wanting to be a “back-seat driver,” I refrained from repeating my earlier warnings about the triangular stone near the opening in the wall. After all, Charlie was driving well, and I didn’t want to sound like I was nagging.

Charlie was watching more to the right side as we approached the opening, and sure enough, that diabolical stone was exactly in line with the left wheel.  Up it went, tipping the cart hard to the right. Charlie fell out onto the ground first, and the cart continued a few more feet before unceremoniously dumping me, then righting itself.

This left poor Blue entirely on his own recognizance. Surprised and confused, he continued trotting straight through the woods about a hundred yards, coming to the driveway leading from the barn to the back pasture. He chose that route and trotted into the field.

By the time we arrived, he had made one pass around the pasture and was headed back our way.  I stood in a straight line with his trajectory, arms extended down and out to the sides.

He slowed and came to a stop directly in front of me, with a relieved expression on his face. He was shaking and sweating, but otherwise he was no worse for the adventure.  We stroked him softly and told him what a good, brave boy he was. Within a minute he had calmed down. Standardbreds are so sensible.

The lines had been dragging on the ground, but still intact, and the cart showed no signs of damage. Poor Charlie was rather upset, visions of what could have happened flashed through his mind.

“Will you drive him back to the barn?” he asked. “I want to watch him moving to be sure he isn’t lame.”

“Good idea,” I replied as I picked up the lines and got into the cart. “Walk on, Blue, let’s go back to the barn.”

Thankfully, he showed no signs of lameness.

Once we unharnessed and cooled him out, we returned Blue to the barn pasture with “Rhythm”(registered as Mr Artline). They stood nose-to-nose, as if discussing the misadventure. Charlie and I discussed it as well.

“I’m sorry I didn’t remind you about the hazardous rock,” I said. ”I didn’t want to sound like an old nag, especially after you made your great maneuver around the other stone.”

“It wasn’t your fault,” Charlie said. “If I had been a little cocky about driving so well, hitting the stone and flipping the cart certainly deflated my ego! I will be sure to check both sides of the cart from now on. And you are welcome to nag me anytime. I promise not to take offense.”

Charlie now qualifies as a “real” driver. Often it is our mistakes that teach us more than our successes.

To see inside the January 2018 edition of Hoof Beats, click here.

Jeff Gural has passion for harness racing and love for the horse by Gordon Waterstone...