As each work day draws to a close, Jerry George eagerly anticipates when the hands of the clock reach the exact juncture that signals that he is able to depart.

While most of his co-workers rejoice in the fact they have completed their daily tasks to pay the bills, for George, he is mere minutes away from what makes his day complete as a certain 3-year-old filly longs for his presence as much as he desires her company.

She bosses around her playmates and kicks up her heels in the field in his absence, but there is no denying the bond Lolli Drops and her owner share. In her eyes, he is the one she counts on to not only satisfy her needs, but exceed them. For George, he simply revels in caring for her, as he is eternally grateful his filly is still breathing and values every second he is able to spend with her.

“Her left front ankle blew up and she went lame right after the race. We X-rayed her and discovered she had a medial fracture in that sesamoid that ultimately detached. We elected not to have surgery and forgo trying to race her again because of the low success rate of recovery with this injury.” 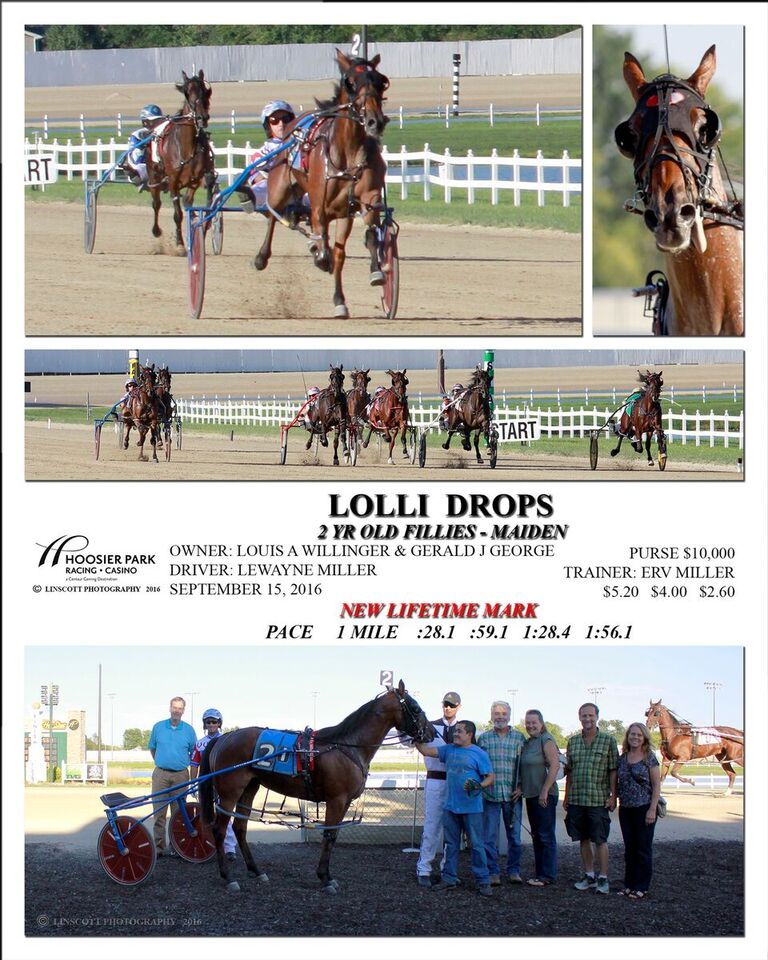 Highs and Lows: Lolli Drops broke her maiden at Hoosier Park last September, only to be pulled from racing action one race later because of a fractured sesamoid.(Win photos by Linscott Photography)

Prior to purchasing the daughter of Real Desire – Westopia, George demonstrated a penchant for speed as he was engaged in auto racing as a hobby. Harness racing was not even a blip on his radar. That is, until Louis “Andy” Willinger transitioned their casual discussions from one sport to another.

“Andy is one of the owners of the company I work for,” George said. “When we first started talking, it was about our sons’ baseball careers and that led to the horses. Andy is a top pedigree man and has owned a number of horses, including a world champion in Lis Mara. He knows a lot about the game and loves it.

“Andy introduced me to the Indiana fair circuit. I expressed an interest and he offered to go in halves with me; he buys them and I find a way to take care of them. I don’t have my trainer’s license, but that is my eventual goal. I received a lot of help from numerous trainers in our area, which is in Corydon, Ind., on how to accomplish that.

“The next thing I knew, Andy introduced me to Erv (Miller) and we went to the Hoosier Classic Yearling Sale where he and Erv helped me pick out Lolli. We brought her home for $4,500.”

George not only found himself immersed in a new business venture as an owner, but eagerly threw himself into being wholly responsible for his new horse.

“I’m a very hands-on person,” he said. “When I become involved in something, I am all in and Lolli was no exception. It was like we were learning together.

“There were so many people that helped me along in the learning process, but I learned the most from top horsewoman Leigh Lewis. She is a former Rolex eventer and I met her by keeping Lolli with her horses the first six months I had her. She taught me how to school and understand her.”

As George endeavored to garner as much knowledge about the industry as possible so he could best prepare Lolli Drops for her career, an unspeakable tragedy engulfed his family. George’s brief entry into the harness racing world and even his ownership of the filly was now hanging by the slimmest of threads.

“On Feb. 27, 2016, my daughter Brittany and my son-in-law, Will, lost their newborn daughter to a strep infection just days after her birth,” George said. “Losing Cora was the most painful and disastrous thing that has ever happened to our family.

“I stopped working with Lolli and went to Colorado to be with Brittany and Will. That’s when I talked to Andy about getting out of the deal with Lolli because I just didn’t know what to do about anything. I remember the first day I came home and I started jogging her in the snow. That is when I decided to dedicate whatever was to come from this adventure with Lolli to Cora. Since then there has never been one time I have not sat behind her that I don’t think about Cora, of losing her and of my daughter’s great pain. Cora’s death changed my life and the time I spent with Lolli became extremely beneficial in helping me move on.”

As George and his family struggled to regain a sense of normalcy and peace, Lolli Drops continued her lessons that would prepare her for her racing career.

“Leigh said she was as smart as any horse she had come across,” George said. “She acted like a stud colt and is definitely a lead mare.”

By July 2016, George determined his filly was ready for competition and Lolli Drops was entered in a contest at the Frankfort, Ind., Fair. Steered by Jay Cross and trained by Simon Girod in all three of her fair appearances, she was seventh in her debut, then second by a neck at the Corydon fair and fifth at the Connersville fair.

“I met Simon at Corydon before I had Lolli and all he does is train horses for the fair races,” George said. “His teenage daughter helps him out and does a great job. I consider us to be good friends so it seemed only logical for him to train Lolli.

“My wife’s sister, Kathy, trains Thoroughbreds. She was there for Lolli’s second race. She was about 20 lengths behind at the eighth pole and Kathy called it that she would win this race. She made up all that ground to just lose and she was never touched with the whip. Andy agreed with me that was her defining race and that is when we decided to take her to Lexington.

Once in Lexington, Lolli Drops entered the barn of Donnie and Mary Brock.

“We had worked out an arrangement where they would allow me to jog their horses if I cleaned stalls for them,” said George. “When Andy and I made the choice to send her to Red Mile, Donnie and Mary had some horses there, so I sent Lolli to them to train. Randy Jerrell qualified her for us and shod her as he is a blacksmith. He was great with her and is a top-class horseman.”

Lolli Drops captured her qualifier in 1:56.2 Aug. 12 at Red Mile, but George had no plans to keep her in Lexington; she was headed to Indiana as her time was swift enough to place her in Indiana Sire Stakes competition. Lolli Drops joined Erv Miller’s stable in August and was fourth and first in two qualifiers prior to her maiden-breaking score on Sept. 15.

Lolli Drops grew her own personal entourage. George would provide weekly updates on Facebook on her progress and his family and friends, in ever-increasing numbers, traveled to the track to watch the filly race.

“So many people came to know her and a lot of them did not know anything about racing until she came along,” he said. “She had fans cheering for her and a following.”

Then George was dealt another devastating blow with the injury Lolli Drops sustained. In an instant, all joy, excitement and elation over her success vanished as he now battled with another tremendous personal loss; one that he believes is his own fault.

“I blame myself for what happened to Lolli,” he said. “When she was training in Lexington she was getting out quite a bit on the right line, so we had Dr. Clara Fenger examine her with acupuncture point/stone method. She said something was going on in that left front ankle after no one else could find anything clearly wrong with her. My farrier attributed it to her angles being off on her feet. Maybe someone more experienced in the business would have known better to ask more questions of the trainer and the veterinarians.

“I always felt 2-year-olds should not be pushed anyway. We never rushed her, but if I would have done things differently, this might not ever have happened to her.”

After viewing the X-rays, George realized the sesamoid fracture was severe enough to warrant extreme care in not only rehabilitating Lolli Drops, but threatened her life.

Roughly the size of a half-dollar coin, the sesamoid bones are a component of a horse’s ankle that affixes to each branch of the suspensory ligament. An injury to a sesamoid prior to fracture is extremely difficult to diagnose due to their small size and any damage to those bones does not offer a high rate of recovery because there is little blood flow to the area. Sesamoids also do not contain periosteum, which is a protective tissue that covers the bone that is an essential element in the healing process, and are exposed to an incredible amount of force, which does not bode well for a return to full use.

The injury Lolli Drops sustained was a detached fracture, meaning it was not a clean break, and bone fragments could easily migrate into her joint, as well as extensive network of tendons and ligaments surrounding the sesamoids. If the filly moved the wrong way, it could cause irreparable, life-threatening damage.

“After the injury I took her to Rood and Riddle,” George said. “I also contacted Dr. Fenger as she really liked Lolli and she put together a rehabilitation program, which I followed to a T.”

The first step in the recovery of Lolli Drops was to heal the fracture and that required four months of stall rest. George was finally able to turn her out on a limited basis in January 2017. For nearly two months, he monitored her every movement while she was outside to ensure she would not further injure herself by taking a bad step in a muddy, slippery paddock.

After six months of holding his breath, George’s efforts and prayers were rewarded as his filly’s health was restored.

“We started cycling her under the lights and then bred her in March to Always A Virgin,” George said. “We will never know what could have been with her, because she was fast and we never got to the bottom of her, but I am just so incredibly grateful she is still here with me.

“All I can hope for is we get a baby out of her that is just like her.”

Previous: Life After Racing: Everything in its Place
Next: The Statistical Edge
792 More posts in Share category
Recommended for you