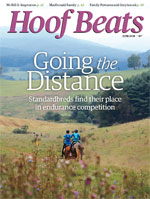 Hoof Beats magazine is curated for print and is best viewed held in your hands as a print magazine. Click here to subscribe to get Hoof Beats sent to you.

Bet-a-Million Gates
The Ghost, the gambler, and the devil’s rope
by Dean A. Hoffman

Profile: Kayla Schaefer
Stronger Together Florida horsemen work together to bring a friend to a survivor
by Jessica Hallett

Opening Bid
Don’t We Have Better Things to Do? Proposed House bill HR 2651 is federal legislation that isn’t good for harness racing
by Russell C. Williams

Previous: Trotting 4 Charity a winner to Gingras
Next: ‘Companionable Sensibility’
40 More posts in Headlines category
Recommended for you