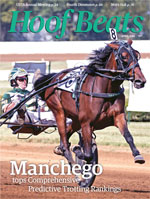 Welcome back On Track! In this month’s issue, all about the April 2018 issue of Hoof Beats—our annual Trotting Preview—we get a video update on 3-year-old trotters Manchego, Fourth Dimension, and Met’s Hall, and introduce a chance to win a beautiful print of Wiggle It Jiggleit by Michelle Hogan! The digital edition of Hoof Beats is available for subscribers NOW at http://myaccount.ustrotting.com. Enjoy! –TJB

Trainer Jimmy Takter has trained some of trotting’s greatest fillies and mares in his career. He thinks Manchego could be the best of the bunch.

The 3-year-old filly and Dan Patch Award winner is predicted to be the richest 3-year-old trotter, regardless of sex, in this year’s Hoof Beats Predictive Trotting Rankings. As a companion to this month’s feature story on her by Rich Fisher, USTA’s Ken Weingartner talked to Takter about Manchego.

Ken Weingartner stopped out at Melander’s farm in New Egypt, N.J.—Stanley Dancer’s old place—and talked with Melander about Fourth Dimension to accompany Lauren Lee’s feature in this month’s issue. The colt is ranked No. 4 in the Predictive Trotting Rankings.

Check out the video here.

Met’s Hall Looks to Do Big Things, Too

What would 2017 have looked like if Met’s Hall hadn’t gotten sick?

We will never know the answer to that, but we do know that he is training down for a big 2018 campaign. Ken Weingartner talked to trainer Julie Miller about Met’s Hall at their home base at Gaitway Farm in New Jersey. It is a great complement to the feature story by Nicholas Oakes.

Check out that video here.

Read the story about a talented harness racing artist, then enter to win one of her limited-edition portraits of Wiggle It Jiggleit. 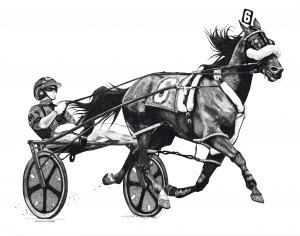 This month’s personality profile is all about Michelle Hogan, who uses a technique called “stipple” to create incredibly detailed drawings of racing’s most famous athletes. She has kindly donated one of her prints of Wiggle It Jiggleit to Hoof Beats, and we want to give it to you!

From March 21 until April 23, anyone who buys a subscription to Hoof Beats–whether it’s a new subscription or a renewal–will be entered in a drawing to win this beautiful print. It’s No. 2 out of only 20 prints ever made.

So head over to http://myaccount.ustrotting.com to subscribe to Hoof Beats and enter today! To see more of Hogan’s work, visit www.harnessartist.com–and tell her T.J. sent you!

Welcome back On Track! In this month’s edition, all about the May 2018 issue of...