While the driver has a good-guy reputation and is generally considered a gentle and sympathetic soul toward horses, don’t mistake kindness for weakness.

Page is out to win every race he drives in.

He’s prepared and motivated to deliver victories. He may not have a win-at-all-costs mentality, but he strives to hit the wire first every time he is in the bike.

“I’m pretty tough on myself,” Page said. “Horses and horse racing are an investment. Owners put a lot of money and work into this with yearling sales and the day-to-day operations. I’m pretty critical of myself. It’s my job to get their horses to the winner’s circle.

“I’m passionate about harness racing and driving. It means a lot to me.”

So do the horses he drives.

Many of the horses Page pilots are for trainers Ron Burke and Brian Brown. Both think highly of Page, not only for his driving talent and skills but also for his compassion and concern for the animals.

“Sometimes, I may be a little too passive with them,” Page said. “I take pride in having a healthy horse to race each week. Give me a month with them and we’ll be successful.”

Burke commends Page’s relationship with horses. He also said Page helps keep him in check with handling horses on the track.

“Truly, Chris is a fan and a friend of the horses,” Burke said. “He likes to win with the trip. He is very patient and kind. Sometimes I’ll really want to go with one and he has another idea of how to win. Chris believes there are ways to win without physically hurting the horses.”

Brown admits sometimes he urges Page to expect more from horses and to physically push them.

“He’s always trying to get the horse a trip and to win,” he said. “I have to tell him sometimes to quit worrying about it. He sometimes qualifies horses slower than I train them. But he always seems to have his horse around. Chris may not win every race, but you know he’s going to have your horse around.”

Page has emerged as one of the top drivers in North America.

In 2019, he moved his career win total beyond 5,000 and helped steer Elver Hanover, trained by Burke, to Ohio Horse of the Year honors as a 2-year-old. The pacer won all nine of his starts, including Ohio’s Triple Crown, with Page driving him eight of those times.

Page also won more than 400 races for the seventh straight year in 2019 and just missed setting a career-high for purses. He won 454 times and earned $5.93 million. His earnings fell short of his $6.19 million in 2018, but he didn’t race as much last year as he took some well-earned time off to get married and enjoy his honeymoon.

“I hardly ever take time off,” Page said. “A day here or another there. But I took a month off to celebrate our honeymoon and to travel. We had a good time.”

Page’s earnings per start in 2019 did exceed the prior year and he also drove 2-year-old filly pacer, Looksgoodinaromper, and 4-year-old Mission Accepted, who was named Ohio’s best older trotter. Looksgoodinaromper was also an Ohio champion. Those horses are also Burke trainees.

“Last year, I felt I took a few more steps in the right direction in trying to master my trade,” Page said. “I’m trying to do things right and be around the right people.

“Last year was a very good year. I must thank the Burkes. They are the ones who made it possible. Between them and Brian Brown, things have been very good for me.”

In addition, he and his wife, Brianna, are expecting a baby at the end of the year, right before Christmas.

“We’re having a COVID-19 baby,” Page said. “Everything is good. I’m very fortunate.”

Page has made his own luck in harness racing. Without a family legacy or much knowledge about the industry, he earned his way to this level through diligence, hard work, and studying all available information.

“I had an uncle and a couple of cousins who were hobby horsemen,” Page said. “When you start from the bottom, you appreciate more what you achieve.

“I have worked for everything in this business. I’ve done it without a (family) name, a grandfather or a dad who was in it. I wouldn’t have had this any other way. When I was younger, I didn’t have any horses. But I’d still go to the qualifiers. I’d just show up and be available. I’d show up at fairs in case someone needed a driver.”

Page was planning on becoming a veterinarian before he decided to be a reinsman. He scored his first win in 2001 and surpassed 300 victories and 1,000 starts in a single campaign eight years later.

“He’s been one of the drivers who has improved the most,” Burke said. “He had not been exposed (to the sport) and the learning curve was greater for him.

“He likes to see things with his own eyes. He is well informed. He could get a little better. But he’s pretty good right now.”

Page’s commitment to knowing all he can about the horses he drives and the drivers and horses he competes against is understood in the industry. He reads programs, studies charts, and watches plenty of video.

“It’s hard to say how good he could be,” Brown said. “He could go on to the Grand Circuit and be successful.

“Anytime you study and drive, you’re giving your horse and yourself a better chance. I know I heard that (Dave) Palone was like that. And he and Chris talk and they are friends. (Chris) probably picked some of that up from him.”

Palone said Page will soon have to make a decision he himself was faced with many years ago.

“If Chris wants, he can make the move—and it literally takes the physical move—out East and compete on the Grand Circuit,” he said. “That’s up to him. I had the choice and I chose to stay home, stay at The Meadows, and be with my family. And it’s been great for me and them.

“Chris will be faced with the same thing. He has to decide if he wants to be the best driver in Ohio or leave his family or move his family. No matter what, he’s going to be successful. Like most of the top drivers, you put the time in to study and you get to know who you have to beat and how you beat them. No matter how much studying you do, you still have to adjust.

“Sometimes you have to abandon the plan and go with your instincts. He is humble and doesn’t give himself enough credit. It’s just not all studying that makes Chris successful. He’s got a lot of talent. He’s a good guy and a real good driver.”

Page is aware of the pain the pandemic has caused in the racing industry in terms of lost lives, jobs, stake races, and purses.

He’s thankful for being financially sound and everyone around him being healthy.

“We aren’t rich by any means, but we are fine,” he said. “Everybody pretty much took a hit. At Scioto Downs, our purses have come back, and the stakes program is booming. I’m thankful to be in the position we’re in.”

One thing he won’t ever forget is the horses and people who have helped him along the way. His admiration for them is never-ending.

“Maybe I’m just a softy,” he said. “Growing up, I loved animals. I’ve owned a couple horses. I’m a fan. The horses are the true stars of the sport. They have created the industry I make a living in.

“To be successful, you have to know a few people and gain their trust. The Burkes have been great to me and Brian is such a stand-up man and a good guy to work for. Whether Ron asks me to go to Maine or Spain, I’m going. I always put the work in, and I still do. I believe in being available, being polite, and being respectful. This is a passion, a labor of love. I’m just trying to be better in life and as a driver.”

John Sacco is a freelance writer living in Pennsylvania. To comment on this story, email us at readerforum@ustrotting.com. 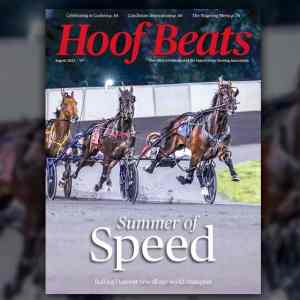