On the second day of the 2018 Lexington Selected Yearling Sale, Karl Pinske headed to the bar to grab a couple of beers for himself and his son, Carter. By the time he returned, Carter had purchased a yearling for $42,000.

Karl approved; however, neither man knew they should have toasted to their good fortune as they had just procured future world champion Amigo Volo.

“When my dad came back, I had the ticket in my hand and he said, ‘Which one’s that?’” Carter said. “He was happy about it, especially after I told him the price. It’s just luck. He slipped through the cracks. When I saw he was still there, I looked down at my book and I had pretty high ratings on him. I wrote, ‘Correct, low money.’

“There was nothing wrong with him; he’s just small, so we didn’t want to overspend on him. We’ve kind of evolved into shooting for Grand Circuit or sire stake horses. A lot of times the smaller horses aren’t that quality. But he had a great video, he was correct, everything was good with him. He was just on the smaller side.”

And as trainer Richard “Nifty” Norman pointed out, “You look at the horse and say, ‘Look at this little guy.’ But you can’t tell what they have inside.”

Amigo Volo possesses an intensely competitive spirit, which presented itself when he began his career. In his first two years of racing, the gelding has:

Such luck is usually a byproduct of some sharp minds and solid research. Pinske felt it was a little of both.

“We really try to do our homework, but I feel any sale you do with the yearlings, whatever is meant to happen is going to happen,” he said. “It was one of those things where it just happened and worked out. That’s what’s cool about it.”

Bred by Kentuckiana Farms and Jorgen Jahre Jr., Amigo Volo is out of Margarita Momma and by Father Patrick, whom Jimmy Takter proclaimed is the best horse he ever trained.

Norman trained the gelding’s full brother, Reign Of Honor ($433,954), who sold for $120,000 as a yearling in 2017. He heartily agreed with the Pinskes—who own Pinske Stables—that if they could get Amigo Volo for nearly one-third of the price, they should open the checkbook.

“When we went to look at him, I actually liked him better than his brother,” Norman said. “He was a little more open, a little thicker. Reign Of Honor won $209,425 at 2, and here’s a full brother that was a better type and sort of got overlooked. It was a no-brainer.”

David J. Miller, who usually partners with the Pinskes, had brains enough to purchase one-third of the horse. No one could imagine what would transpire when Amigo Volo’s connections began training him.

“He was really tough one week, the next week he was perfect, then really tough again,” Pinske said. “He was a ridgling and was one of those ridglings that would really test your patience one day, and the next one he would be the coolest horse you’d ever been around.

“But no matter if he was tough or great to deal with, he was always good-gaited and showed ability. He’s really, really athletic, but he just had other things on his mind most of the time. We took our time with him.”

Amigo Volo was eighth in his career debut on July 19, 2019, at The Meadowlands in a leg of the Kindergarten Classic Series. He rebounded 11 days later to break his maiden in his second start at The Downs at Mohegan Sun Pocono. The gelding has been an overachiever ever since.

“He’s actually been nothing short of amazing,” Norman said.

As a 2-year-old, Amigo Volo won six of 12 starts, was second twice, and earned $610,546. The gelding set multiple world records and won the Breeders Crown final in impressive fashion after breaking in the elimination.

His connections discovered early on the gelding disliked dirt in his face when he was behind other horses.

“There were probably more nervous times or worried times his first year because he started making mistakes by shaking off the stone dust coming back at him,” Dunn said. “In the Breeders Crown elimination (when he finished seventh), he had dirt hitting him in the face. He would shake his head and then he broke a couple of times. We had to get him clear of the other horses.”

Despite that issue, Amigo Volo trotted a 1:52.3 mile at Red Mile in his second Grand Circuit appearance. It was a world record.

After faltering in the Breeders Crown eliminations, an equipment change proved beneficial, as the gelding went wire-to-wire in 1:54.3 to take the $600,000 final.

Amigo Volo followed that performance with another world record when he won the Matron Stakes in 1:52.4 at Dover Downs.

“I think at the time, it didn’t register,” Norman said of the gelding’s first year of competition. “As a trainer, you’re always a little bit glass-half-empty; you worry about next week more than just what happened today. You keep looking ahead, thinking, ‘Geez, can we keep this up?’ or ‘Where the hell did that come from?’ He just kept answering the bell.”

Pinske could only watch and marvel at each of Amigo Volo’s performances.

“Every time he did well like that, you just had to pinch yourself like, ‘What the heck are we looking at here?’” he said. “Then he’d go out and do something better. Those kinds of horses—they don’t come along too often and you just have to take it in when they do.”

“After the Breeders Crown, basically we said to each other, ‘He’s not very big. He might not be any better next year. We better get what we can get right now,’” Norman said. “That’s why we raced him as much as we did. What he did at the Breeders Crown, just scraping in by the skin of his teeth to make the final, and then he comes out and jogs to win it. It’s hard to process it all.

“When we came back last year, we figured anything we got was all gravy. I didn’t really know what to expect. And it turned out he was just better than ever.”

When Amigo Volo returned last year, Dunn began working on the gelding’s habit of breaking when he was behind horses. While learning his lessons, Amigo Volo kicked off his season by winning two of his first three races.

Saddled with post position 10 in the $1 million Hambletonian on Aug. 8, Amigo Volo hit the wire in fourth. Norman felt the horse gave a good account of himself in that event but could not overcome the post and a tough trip.

“Dexter made that horse last year,” Pinske said. “He was really careful with him the whole way.”

He might not have been performing where Dunn wanted him to be early in the year, but the driver never left out of the gate hard with him. He always gave him a chance to be cool and find his rhythm.

“That’s really what I think made the horse, along with Nifty being a very, very experienced Grand Circuit trainer,” said Pinske. “He just kept saying to me and Dexter, ‘Keep sticking to the plan. We have to race him off the pace. When we get to the Hambo, that is when we want him to peak.’ He ran into traffic trouble in the Hambo, but I think if he wasn’t the second-best, he was the best horse in the race.”

From that point on, it was the Amigo Volo show. He won the Pennsylvania Sire Stakes final, prior to taking Lexington by storm, where he was second in a division of the Bluegrass Stake and first in the Kentucky Futurity.

After winning his Breeders Crown elimination in a track-record 1:51.2 at Harrah’s Hoosier Park, the trotter survived a late rush by Play Trix On Me in the $500,000 final to win in 1:53.

“I remember just kind of being in shock,” Pinske said. “Before the photo came up, I just stood there looking at the TV. There was no way I was getting in the van to go to the winner’s circle because it was way too close to tell. That few minutes was tough.”

“It was a bit of a nail-biter,” Norman agreed. “I give the horse all the credit. He probably should have been beaten, but he dug in and got it done.”

Amigo Volo became the fourth male trotter this century to win a Breeders Crown at 2 and 3, joining a group that includes his sire.

“Once again, you don’t really process something like that at the time,” Norman said. “But when you look back, it’s so gratifying. It’s hard to do. Again, all the credit goes to the horse.”

“It’s pretty special and pretty crazy to think about,” Pinske said. “As a stable, we had something like 20 starters in the Breeders Crown before we got our first one, and to get one with the same horse two years in a row with the same connections. It really speaks for the whole team and for the horse. He’s just special.”

Amigo Volo demonstrated just how special he is when he concluded the season with a track and world-record triumph of 1:50.2 in the Matron Stakes.

“The race that really amazed me was his last start at Dover,” Norman said. “He was scary. He could have beaten anybody that night. He was just out of his mind—very, very good.”

The Matron gave Amigo Volo nine wins from 15 starts in 2020 and pushed his seasonal earnings to $939,498. The gelding is still on a winter vacation and all systems are go for his return later this year.

“We’ll try the same thing with him and hope he gets better late in the year,” Norman said. “Carter sent me some pictures of the horse down in Florida. He looks really good. He’s such an honest little bugger, I don’t see why he won’t have a good year.”

What Amigo Volo accomplishes as a racehorse, however, is only part of the horse’s story.

“He acts more like a dog than a horse,” Pinske said. “He follows you around like a puppy. You can leave him untied in the yard and he won’t go anywhere. He’ll just eat grass. He’s pretty chill. He doesn’t get too worked up about anything and when you turn him around and go behind the car, it’s all systems go. It’s like hitting a switch.”

“He just loves his work,” he said. “He’s always at the gate, looking to get out in the field. He never misses a meal. He’s the easiest horse in the world to be around. He’s a kind, little guy. He’s got a good personality and lots of energy. He’s just a happy horse.”

“He’s about as cool as they come,” Dunn said. “I’ve seen him at the barn and he is like a pet. If you put 100 people into the barn who had never seen him before and took the name tags off the stall, not many would guess that was Amigo Volo standing in the stall. He’s very quiet, very laid-back. There’s nothing special about him to look at him.”

That is until Amigo Volo hits the track.

“He’s like the Rudy story,” Norman said, referring to the Notre Dame football player who was an underdog. “He’s the little guy who came through. I would sort of call him an overachiever. He really has done a fantastic job.”

In fact, Karl should have bought a bottle of champagne rather than a couple beers in the sales pavilion, as his son purchased a horse well worth popping the cork for.

Previous: Hoof Beats February 2021
Next: Back in Business
215 More posts in Hoof Beats Magazine category
Recommended for you 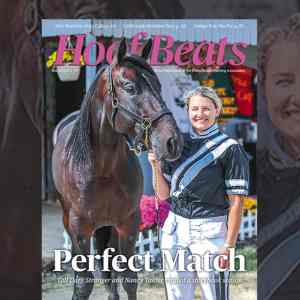